Busy week, the last in town we hope. 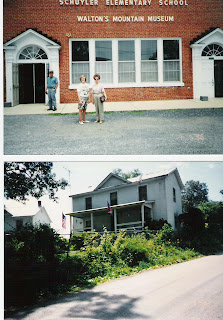 I was a big fan of the Walton's TV series. Once driving some interstate we caught sight of a sign to the home of the Waltons. This is their home and the school they attended.

Busy week planned. Busy is not my cup of tea, unless it is actual work, then I am okay. To me building the ramp we just finished is a fun thing. Sherry and Vickie were there to help me hold and measure at times and things went faster. Of course most of the labor was mine, and that is what I wanted and what I like. I have always been a hands on contractor. If I could get to it and had time, I wanted to do it. I can work days by myself, it doesn’t bug me. My son Mark who is now a general contractor, will pay someone just to be with him I think. He is not a loner. One thing about doing the job yourself, you can’t blame the mistakes on anyone but yourself.
WE are watching Mark remodel a house that will eventually be ours. He & I are as different as night and day. I could not work in the mess he does, but he gets the job done, and most of the time better than his dad would have. He is losing his shirt on this project since the downturn happened just after he, Shirl, Sherry and I bought into this project. Hopefully this week the project will be finished and the investors will make about 5%. Not the 10-20% he had hoped. He is losing mainly because he hoped to gain a lot in the process. He is gaining the building lot but at a big price now.
His judgment isn’t what it was a couple years ago. He & his wife divorced a couple years back, and he can’t seem to get back in the groove. I think I see a little improvement, but everyone says this takes time. I am sure it does.
My dream was that my boys would have a marriage like Sherry and I have, but so far it has not been the case. It can tear your heart out, but we all must keep on going. (Some wonderful grandkids were produced however).
I must be away from here or I stick my nose in where it has no business being, because ‘Father knows Best’, FUNNY AIN’T IT, but no one knows that but me. Hahahahahahahaha!
NIte Shipslog
PS:
Written By Regina Brett, at 90 years old,
6. You don't have to win every argument. Agree to disagree.
7. Cry with someone. It's more healing than crying alone.
8. It's OK to get angry with God. He can take it.
9. Save for retirement starting with your first paycheck.
10. When it comes to chocolate, resistance is futile.

So you and Sherry are starting to get itchy feet as mom used to say. Go while you can cause it would be highly unusual if there were not a time when you both realize you need to be , hopefully don't have to be stable because of poor health. It is very easy to see our kids mistakes, or want to say something they do not want to hear. and it is good that you can get away while you can. As for divorce, lord knows I know all about that and when the parent has experienced it they do not want it for their kids but it happens. You are a wise man Jack and Sherry and you deserve each other. 2 good loving people that are content to be with each other. I hear a little nostalgia in this entry and that is a good thing.

I feel for Shirl, it's a little lonesome when visiting loved ones leave...but then again she may be marking the calendar, counting the days...ha. Really though, I'm sure she will miss her little brother and his wife. Take care and drive safely, Sheila

I'm living through you both right now! Oh, I wish I could afford to do this cross country trip sooner! Until then, I'll be learning a lot! Oh, I have that little voice inside too "Rain knows best"...I don't always share it though, lol!

Lost first comments will try again forgot what
I said. I know you are ready to get the Hell out of Dodge as Dick, Kat and you guys would say. I will miss you. We all have been busy
for about 2 weeks. After entertaining at Holy
Angels and my volunteer work at Historic House Sunday I can rest for a couple of days. But we have fun. You going to miss all this activity.

Hi Jack and Sherry too....I am catching up on blogs..when the weather gets so very nice...I am outside...with the dog...with a good book...with a cold drink...the days are not long enough...LOL..and about "free cell"...the best game I know...love playing it...I do play every day!!!! be safe in your travels...hugs...Ora

Jack and Sherry, I just want to wish you all the best and hope we can all keep in touch. Shirl will hold down the fort, as usual. Jack you stay out of trouble???? It rained cats and dogs here last night and today. Take care you 2 . Lucy