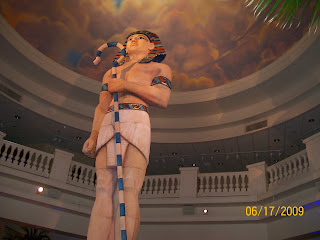 This is a 25' Joseph in the lobby advertising the play Joseph coming next year. 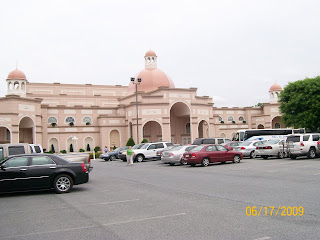 the outside of the Sight and Sound Millimium Theater. Ronks, PA 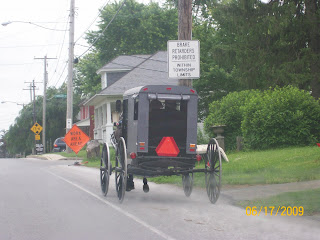 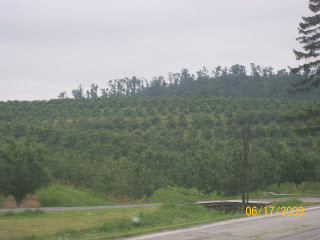 One of the apple orchards we passed ont he way to Lancaster. 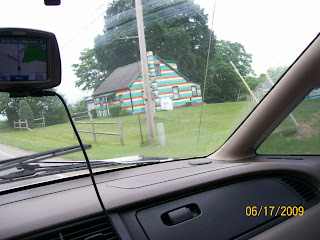 I had to get this house in farm country, I wonder if the colors represent anything?


Okay there is Intercourse then Paradise. Then you see Blue Balls and Liltits. You can’t miss 'Bird in Hand', they are all town names here in Amish country. The names are just as common to the folks here as Sedalia, San Antonio, or Belmont. It is us tourists that make a lot of to do out of the names, we think they are cute or off color.
Today we attended the play, ‘In The Beginning’ at the Millennium Theater in Ronks, Pa. Of course I did not understand but fifteen words during the whole play, but I enjoyed the scenery and animals. I enjoy the huge productions they do here because I have never seen anything of this magnitude. We mostly attend outdoor dramas and I enjoy them. These Bible stories have a large cast and many live animals. There was a gaggle of live geese what went across the stage tonight, also several horses, cows, pigs and an ox or two. There are many animated animals from elephants to large turtles, I thought of Toby.
After the play we met with old friends (who bought our dinner, I fumbled the longest, no really they insisted) Dan & Joan. Dan was my boss once in the Navy. Joan and Sherry were close friends. Joan taught Sherry to swim and she never fails to mention that, she has gained so much enjoyment from it. We ate at ‘Bird in hand Restaurant’ then went to Dan & Joans house. While there their son Mike and family came over. We had a great visit. Of course I did not hear a whole lot, but it was such a joy to see them all. Joan is doing great after having a stint put in. She is trimmed down 40 lbs and looks very good!!! She and Dan were super dancers in their youth and I’ll bet they still turn a great dance on the floor.
Funny incident, I might have told before, Joan and Sherry were touring Shrimp boats in Key west when the one they were on go underway. They circled out into the Gulf and returned for the Blessing of the Fleet. A great story, I included it in the story entitled ‘Skiff’ in Toby’s Tales.
Thanks for coming by the Shipslog.
Nite Shipslog
PS:
Written By Regina Brett,

***** However good or bad a situation is, it will change.

***** Don't take yourself so seriously. No one else does.

***** God loves you because of who God is, not because of anything you did or didn't do.

Jack and Sherry, It sounds like you are having a great time. For once in my life I wish I had traveled more. I love the pictures. I am learning more by following your travels than any history book could ever teach me. Keep those pictures coming. I must say when I saw the title, "intercourse" I thought I had the wrong page.

Now, when I first started reading I thought you were fixing to be in trouble with Sherry for giving out to much info about a romantic night...ha. But I am glad to see you didn't 'kiss and tell'...ha. Glad you are having such a great time. I agree with Lucy, we get to see a lot more of the world through your travels. Keep it coming, Sheila

The name of the town just crack me up. You put
this on late because i check after 11:00. I guess you were at the out door theatre. Glad
you are having a good time.