SNOW? Do you know who knows how to drive in it? 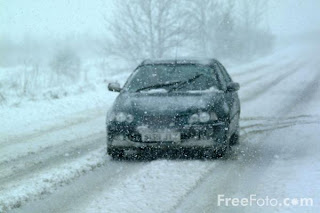 Most of us have been here! 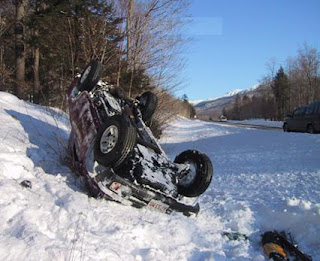 Hopefully we have not been here 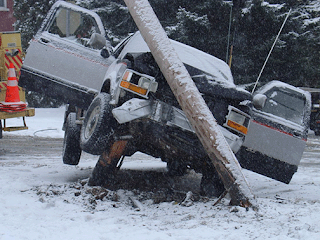 The world opens as you travel. You find that folks from Washington State are like the ones in Louisiana. People are just people, that tawk different. Down South I hear: “em Yankees shore got a accent, don’t they?” Traveling, I have grown to love every accent in the USA & Canada. We had evenings with Al & Judy from Maine, I enjoyed the evening just listening to them talk.
BUT, we all have the same sort of problems. Health, money, and some have children on drugs. Some have been very successful, while others just get by. But most of all you learn that we are all in the same boat, in our country it is called the USA. The majority of us want the country to continue and be a leader in the world. Most of us, military and civilian do not like war. Most of us don’t even like controversy.
I have come to one conclusion though, only one group of people knows how to drive in snow. How do you know? You ask. Well if a guy from Virginia is in SC and the miracle of snow happens, he sees cars in the ditch and says, these folks down here have no idea how to drive in snow. Now he goes back home. A guy from upstate New York comes to VA. Sees the cars in the ditch during a snow. He will be heard to remark, these folks don’t know how to drive in snow. The Canadian is next. In New York, he sees cars in the snow banks, and down the hills. He sees all the dented fenders and says, These folk do not know how to drive in snow, now in Canada…etc. the next must be the Eskimo so visiting Montreal he is heard to say, “ Wow, mon ami, doesn’t anyone here know how to drive in snow?” Conclusion: The Eskimo can drive in snow. (There is no one farther North to tell him he can't)
In the military, especially, where many states and cultures are represented I have heard it so many times it became a joke to me. I have decided after being in some real cold snowy places, there are always that few who JUST CANNOT DRIVE IN SNOW. While Most of us will take their time and get where we are going whether in SC or Northern Quebec, Yukon or Alaska.
Of course there is one big difference that the boy from the south runs into up North, Canada and Alaska. What are all 110v plugs hanging from under the bonnet of their cars for? Electric cars?!!!! Hahahahahaha!
Since it is not time for snow, I thought I would bring up a subject that cannot be controversial this time of the year, CAN IT?
Just another rambling entry from the motor home, at present located in the Catskills of New York.

I think yesterday was the day Old Boomer ( http://oldboomerwoodys.blogspot.com/ ) was supposed to take his Honey to the Spine guy/gal in Syracuse. I hope they were able to relieve some pain someway. Lot of back pain now a days.
My Sherry says that is what I am ‘a pain in the….., nah she would not say that,’ she would think it, but she loves me too much to say it and hurt my feelings, don’t you honey?
Nite Shipslog
PS:
On a positive note, I've learned that, no matter what happens, how bad it seems today, life does go on, and it will be better tomorrow, or the next day.
Posted by jack69 at 10:05 AM

Acccording to Mr. Public no one can drive but
him as he slides into a ditch. I have been caught several times on the road in the snow
and got home OK by being slow and careful. I did discover black ice once and now I know about that slick mess. We battled snow in Maryland. I wish we had snow right now it is in
the 90's and no rain.

LOL, that is really funny! I never heard that story before! but I have to say, sweltering in 90 degree weather, I don't mind reminiscing about the snow!!!

Thanks for the entry about snow. It made me feel cooler and I admit I can't drive in snow. We haven't had a real snow since 1985. That would be a matter of opinion if it was a real snow or not.

I never learned to drive on ice...and or snow!!! as I have always said..."I am an accident waiting to happen on ice and snow!!!" LOL when the first flake falls...I hibernate..literally...but love looking at it out the window and watching the kids do their thing in the white fluffy stuff...and as a kid...snow ice cream was a special treat...wouldn't and don't make it today...Lord only know what terrible stuff is in that flake now!!! and by the way Jack...you could be nice and let Sherry get to the blogs first...hmmmm??? hahahaha....hugs from Kentucky

I drove in snow from the day I got my first drivers licence. I don't do much of that any more. Let Joe do the driving while I constantly back seat drive. I will never be able to break that habit. You go Shirl!!! We ladies have power and can use it if need be. Be safe Jack and Sherry.