the law and Justice. 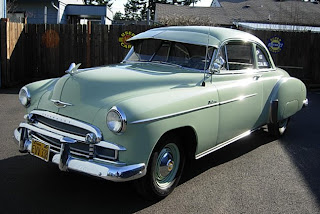 This is a 1950 Chevrolet business Coupe. This is like the car we had when we got married, except the drivers side was badly dented from where I wrecked it.

I respect the law. I try to obey the law of our land. But when you hear some reports, don’t you wonder sometimes about the sanity or commonsense of judges and juries?
Just this week two cases got under my skin. One was a drug dealer sentenced to 10 years and served four, before he finally got a lawyer to look at a three letter work out of place in the juries verdict. The word ‘two’ was in the wrong place. So an appeal was made and he can be released from that charge. But thank goodness there is another charge in another state he must face. But why couldn’t the first work. The jury agreed they wanted the man locked up for 10 years. But he is off the hook.
Now enter a lady who finds and abandoned fawn. She nurses it back to health and takes it from Ohio to Kentucky and releases it. WHOA! She broke the law by transporting a fawn across state lines!!! Now she must help the law find the fawn so they can put it to sleep. She is also faced with a prison sentence and a $500 fine. I don’t know, I guess here I am again talking about animals, (human and the real thing) and might upset the world.
I read on an old Baptist Church sign once, “Common Sense is not so Common any more!” Ain’t it the truth.
Now I know we cannot go killing everyone who commits a crime. But I lean that way when a felon continues to commit crimes, and will never stop. I’ll never forget an interview by on of our illustrious reporters with criminals in one of our largest prisons. I heard this!
“What are you in for?”
“Bank robbery.”
“You are due to be released next year, do you have a job waiting?”
“Sure, I always got a job.”
“What is it you are going to do?”
“Man I am a bank robber, that is my job.”
“Are you serious? You are in jail for robbing a bank. Don’t you know you will end up back here?”
“Not necessarily, but getting locked up is one of the hazards of my job, all jobs got some down side!”
Now why not just shoot the guy? He is never going to be part of society. He is always going to prey on some one, and never pay his own way. I really do not want to feed the guy for the rest of his life do you? Is it fair?
Don’t we have some large tracts of Government land that can be farmed? Can’t we put habitual criminals to work, at the least, raising their own food.
WE could have the meat from all the wild hogs in Florida and Texas sent to the farm to be butchered and they can eat that for meat. Throw in some road kill deer, when the police and county guys can find it soon enough. Possoms too!
I like the lady in Australia whose grand daughter was raped. She tracked down the guys, and blew most of their plumbing away. they lived. She took her gun to the police station, and said they won’t do that again! She was 81. This was after Australia passed a law that hand guns would be turned in. She said I wasn’t crazy enough to turn mine in.
Sorry about the length, I got carried away. Thanks for coming this way.
Nite Shipslog
PS:
If everyone was as smart as me, we would all be in trouble.
Tell your husband/wife you love ‘em! (BUT, be ready to dial 911 for help with shock.)
Posted by jack69 at 5:24 PM

Hi Jack and Sherry....well Jack I am with you...I always said that if anybody ever harmed one of my kids I would do the killing...LOL..save the country some money...satisfy me...and well I know I am on the right track for the afterlife LOLOL..oh my!!! real hot here....88 today....92 yesterday..you can almost hear the water being slurped out of the pool...we are thinking of a cover for summer...always something..got a baseball tournament this week end...gooooo White Soxs LOL well enough...hugs to you..be safe...Ora

You would have loved the car show in Nashville. Nashville Good Guys, I think they are called. Lots of old cars. Fun to look in them. An expensive hobby.

I vote for you Jack. You've got some good ideas here.If I was ever going to break a law it would be to raise a baby fawn but not to take across the state line. I would keep it in my back yard and put a tiny bell one it's neck.