WE HAVE IT MADE 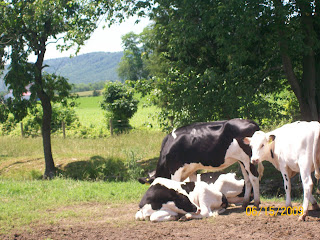 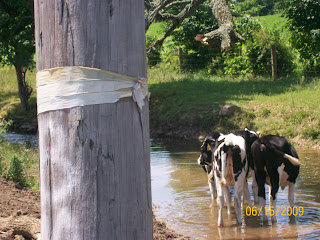 The above are Pennsylvania Cows relaxing. 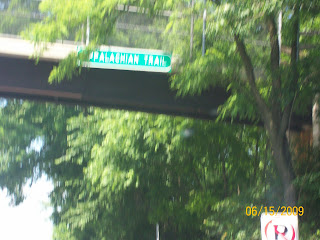 This picture is out of sequence, and a little blurred. This is the Appalatchian Trail crossing above US 11 using a walk-over bridge. We cannot pass up a reference to the AT. 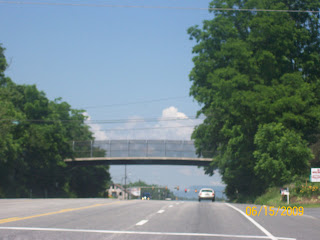 This is the shot approaching the overpass. 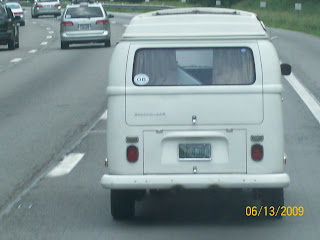 This is especially for ORA, he was in the slow lane crossing the Blue ridge maountains. Beautiful antique VW BUS.

We retirees have it made at State and Federal Parks, Monday thru Friday. All the working folks head back to the office and school or sports activities for the kids. The world has changed; we want stuff, so everybody works to bring in enough money to make the payments.


WE think we need more than we actually do. I see the toys kids have now and the cost of them, and I am amazed at what some folks call essentials. If you leave a child to its own resources he/she will find something to serve as a toy. I tried it with our grandkids. We spent a lot of happy time making boats out of dead wood. Bark of trees etc. men aboard the boats were rocks or sticks.
IMAGINATION is what we are not cultivating. I can remember when the radio was the biggest mass media for kids. The radio programs you could listen to and just see the characters in your mind’s eye. What was your favorite radio program? My most favorite was The Lone Ranger. Five to five thirty Mon. Wed and Friday. I loved the Sat. nite programs The Squeeking Door, Mr. & Mrs North (I think), but at nine it was “The FBI in Peace and War.” After every program they would describe one of the ten most wanted.
The most thrilling cowboy program came on once a week on Sunday night, it was Gunsmoke. William Conrad was Matt on the Radio, the perfect tough guy voice. When TV came along he didn’t fit the description. I was disappointed at first because James Arness did not have that ‘voice’. (Of course me & millions came to love James as Matt).

Anyway we are in the woods and enjoying it. WE met two thru hikers from the AT today called ‘Cord’ and ‘T-squared’. I think I mentioned this is the halfway point of the AT. We hope to see some more hikers. They will probably catch up with us in New Hampshire.
Nite Shipslog
PS:
When you get down think about this:


***** When you think you have no chance of getting what you want, you probably won't get it,but if you trust God to do what's best, and wait on His time, sooner or later, you will get it or something better.


***** When you make the biggest mistake ever, something good can still come from it.


***** When you think the world has turned its back on you, take a look: you most likely turned your back on the world.
Posted by jack69 at 2:29 PM

Farm girl first, The cows look great. I don't know about the Carolinas but we don't see as many cows as we used to in Ne.I think most are in quaraNTINE RIGHT NOW BECAUSE OF BOVINE SOMETHING. It is very hot and humid here today. If you are in weather like this, you know enough to be careful. Love the pics. I don't mind this kind of travel. Doesn't tire me out at all. Keep those pics coming.

Have to add I am in complete agreement on kids today compared to even my kids childhood days.

you are right kids today have NO imagination at all.....it's truely a shame

Wonderful quotations today. I know how you feel about having it made from Monday to Friday! That's how it is here too, quiet, practically have the mountain to myself! I loved seeing the photos!!! Gosh, you are so right about what people call "essentials" these days. I am from the television generation, but I still love listening to the radio on Saturday mornings..the car show, the home improvement show, the travel show...when the Montreal Expos baseball team still existed, I listened to every game on the radio! I've realized that I can live on much less than I thought I could - it's a great epiphany because it's so freeing! Nice post! Enjoy the woods!!!
xxx

Beautiful pictures. Imagination what is that.
Give them a clicker and they are brain dead. It is really sad I think most of them are lost in space. I know that sounds a little harsh but I
have been around a few.

I so agree on the "we think we need more than we actually do." People are shocked to come into my house(with no TV, toaster, microwave, etc.) & see very little furniture, a computer & books-some pictures. Uhm, that's it. I can afford more things, but I don't need or want them.
Imagination, good point. Maybe that is why half the patents in the US are taken out by people whom are not US citizens. ~Mary