GOALS AND PRIORITIES, what the heck is that? 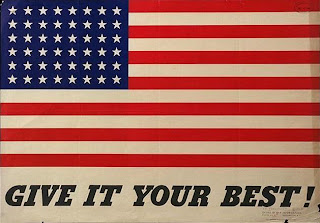 Remember 48 Stars? (I know there are some out there can remember thirteen)

Today's insightful, insectful, stupendary, dromedary and garbled entry!!!! (all the words are correctly spelled, no red underlined ones, they must be right, don't be picky about the meanings)

That is hard to answer for the average person. Most of us humans are wishy washy. Our priorities change like the wind. Some change is good, some is necessary.
Are priorities the same as goals? Sometimes we get them confused. Or maybe it is just me.
We were laughing the other day about how much fun we had when we were first married and my salary was less than $1000 a year. (The average person in Belmont was earning $2,000 a year, so I was less than half the average). Sherry quit her job and was a stay at home wife; we put ourselves on a budget and had to stick with it. Sherry enjoyed sleeping in and not going to work in the mill. WE did not make any debts. We did not enter our marriage with the cost of a big wedding hanging over our or our parent’s heads. (They could not afford it anyway.)
I think I have mentioned it before, during the first year of our marriage we had a dollar left at the end of the month. A dollar to spend anyway we wanted. LOL. To be honest, we were so happy we never realized how close we were cutting it.
So I think our goal has been ‘Our Happiness’. Or was that a priority?
Once in our lives (my life), for a short period, my goal was to be a millionaire. I made no bones about it. I had gained an education, but few folks knew it. Most folks knew when I left our small town I was a High School dropout, with a record number of hours in detention hall. I think when we moved back, I wanted to prove that I could do as well as the ones with the degrees.
I did prove it, at least to me. Then Sherry & I talked it over and reconnected with our real priority, happiness together. Our happiness, and love, did not suffer during this period, but my health would have. We realized continued 60-80 hour weeks could take its toll. So we scaled back. I forgot the money goal. And we were back to the idea of OUR Happiness and a long a life together.
There have been other short changes in priorities, caused by circumstances. As I said earlier, most humans are wishy washy, but we don’t like to admit it. So now I try to just go with the flow. I am very happy and have been very fortunate over the years. Fortunate to have my Sherry, who has been THE stabilizing FORCE. No telling what I would have become, if not for my great CATCH!
My goal is to outlive the guys who are standing in line waiting for me to cash in. And I am doing a pretty good job of it.
Thanks for coming this way.
Nite Ships Log
PS: This entry probably doesn’t make much sense, but it is mine.
Oh, Melanie had a great story about a cat over at
http://honeyimhome-honey.blogspot.com/ a couple days back.
Posted by jack69 at 10:51 AM

A little rambling never hurt any one. I have a tendency to ramble BUT, Jack remember I will be 80 in Nov. so I have an excuse. Actually I do understand what you are saying. You are actually speaking of life and you have to admit yours has been a full one. Yes, I know I will be cooking for that beagle the rest of who ever lives the longest. Joe wondered what he would do if he was alone with Spunky. He opted for dog food. lol.

I don't how I missed yesterday blog. That hammer should be Odis mail box. Remember when
he made a mail box and put it about 5ft. tall
and put AIR MAIL on it. It made the Newpaper.
Our home, dry lake house and all cars were paid
for. That is the reason I am comfortable in
retirement.

When I read what you made when you got married it brings back old memories that was the way it happen when my husband and I got married we made it and have been married a longgggg time I was young when we married and like you dropped out of school and I got my diploma later. lol. Money was tight we are retired now and live comfortable on what we do have. Take care, jean

I'm wishy washy, and I'll admit it! I sometimes confuse goals with priorities too, still working on setting boundaries for myself!

sometimes I say "oh for the good old days" of when we first married...life was simpler then it seemed...we had a budget...didn't make any difference what we did or didn't want...the budget came first!!! LOL..and I don't believe I have ever been wishy washy...not that I had goals set either...but just seemed to be on a one track road going two ways...coming or going!!!! LOL...not sure I would change anything even if I went back to the "old" days..life has been good with it ups and downs...but one thing has been constant...the love and caring hubby and I have for one another...this endures over all else...enough of my mushy mush!!! LOL...hugs to you both..Ora

Jack wrote: This entry probably doesn't make much sense, but it is mine.

THAT is how I feel(sometimes)about my entire life. ~Mary

I've heard the stories of searching in the sofa cushions for change to go to the movie...Take care, Sheila