Nothing hurts worse than failure!

Failing is not always a bad thing in the over all view of life. I remember reading a wise saying, I do not know who originally coined it, but it was:  “Show me the man who has not failed, and I will show you a man who has not tried.”  Good or bad, at the time you fail, IT HURTS!  I remember the first test that I did not pass high enough, I did not fail, but I did not make high enough. I remember, as a grown man, falling across the bed and crying.

I needed that promotion. I had a wife and two kids, we were living below the poverty level, I felt like a failure, I was in the pits. All the consoling in the world would not fix it at that time.

On a much earlier occasion, as a 16 year old, I  decided to join the USMC, become a man. I told everyone, principal, teachers and class, adios, I am gone, basically take this school and shove it. Forged and faked some papers, passed all the tests and boarded a bus for Raleigh, NC. Long story, cut short. I got caught, came home with my tail between my legs and mama said, back to school. ‘tis rough to face the school principal, teachers and peers and become ‘just a student again’. My first BIG failure in life. But I did face it, affirming in my mind it would not happen again, and it didn’t. Not for years, not until the failure of a test.

I have never failed a test, I still have that distinction because it came back “PASSED BUT NOT ADVANCED”. They may as well have said “YOU FAILED”.  Of course I licked my wounds, Sherry petted me a lot, and I went to work studying, next time I made it.

Yeah, nothing hurts worse than failure, but the smart thing is “PICK YOURSELF UP, dust yourself off, and start all over again.” Our twin grandsons used to sing that. They, and some of the other grandkids are grown now, and have already had to do basically that, and they are gonna succeed.

Life is good, failure hurts, but success covers a multitude of hurts. Winning the fight is done by simple math, getting up one more time than you are knocked down.

So look up, the sun will rise again, will it see someone trying, or looking for excuses for their failures.  Everyone has decisions to make, just some are tougher than others.

Why does "fat chance" and "slim chance" 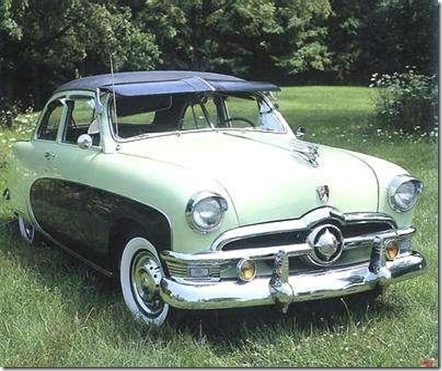 I’ll never forget my brother Odis owned one like this, I thought it was the prettiest car I had ever seen. 1950 Ford Crestliner

I've done a lot of that picking my self up and you are right, no matter how much it may have hurt we just have to dust our selves off and start all over again. Raining here and high winds expected...blowing snow in our way fro the weekend.

Good entry. You're correct we just have to pick ourselves up and keep trying.

Am grateful for that entry.

Please have you all a good weekend ahead.

WONDERFUL post, Jack. words of wisdom here. No doubt about it... "If at first you don't succeed try, try again." I used to say, "Failure is NOT an option." But I have learned that failing teaches us so much more than that. Life is all about picking yourself up and moving forward whatever you have encountered along the way. Take care.

Great post my dear man! Sometimes those failures are meant to re-direct us. Anyways, that's my story and I'm sticking to it!
'love & hugs from afar' to you and your bride :)

I don't remember my failures. I
sure they were many...It seems
like I had to work hard for every
thing I tried to do. I guess I didn't take my failure serious enough. Thank goodness I don't remember them now. Life is good and goes on.

BTW - The Crestliner was one of the first cars to have a vinyl roof.