I DO SOMETHING STUPID EVERY ONCE IN AWHILE

Yesterday was one of those days. I had looked for the best and fastest route to Hershey, PA. Finally I told Sherry, I am putting the address in the GPS and following it. We drove in 6 states yesterday. It went well, up to somewhere in Connecticut. I-95 South. Sherry was looking at her computer it said go another way. 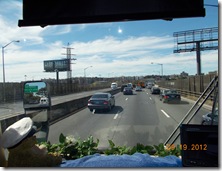 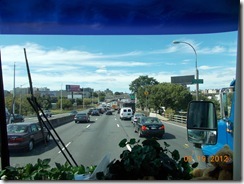 Then I hit a dead stop, due to an accident. Slowly we got past that. Not paying much attention, except to the directions on the GPS. Once I said that is a huge lake out there, Sherry said, “Honey I think that is the ocean.” WHAT? 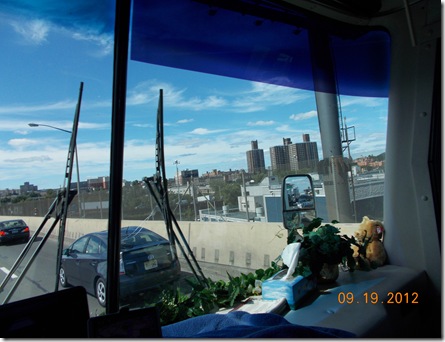 Then and only then did I see NYC on the sky line, WHOA! then I see the GPS say turn right. Above the intersection it says, “CARS ONLY”. In all that traffic I pulled to the side and stopped. The GPS was taking a short cut on a city street to save 100’. They can do that. We decided the best thing to do was stay on I-95. As we approached George Washington Bridge, the traffic stopped. One lane was closed on GW Bridge.

Ever been in a truck sandwich? 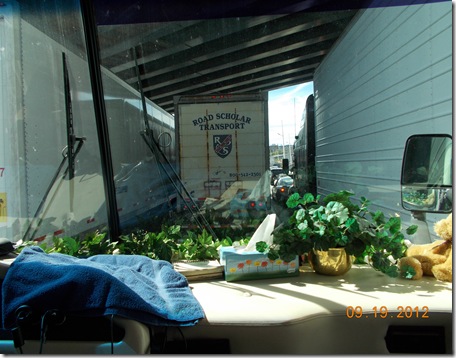 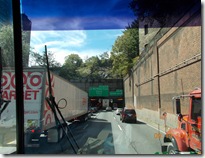 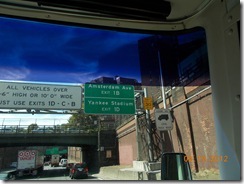 As much as I would like to see Yankee Stadium, now is not the time! 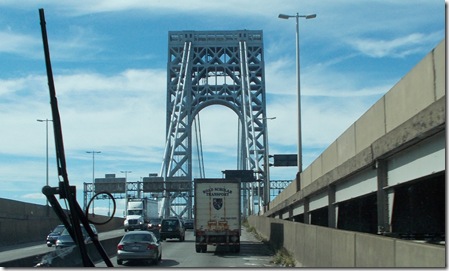 On the George Washington Bridge. 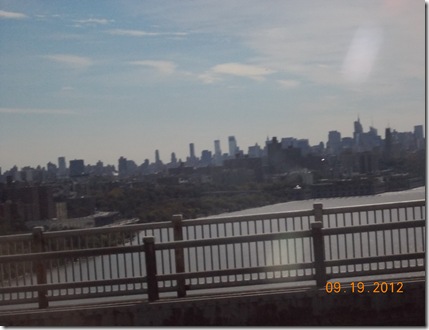 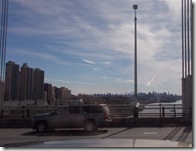 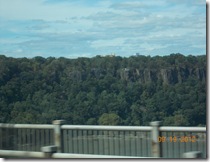 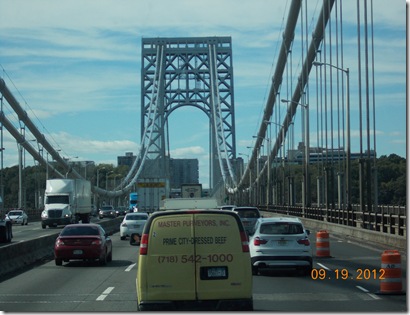 On the Bridge headed for the New Jersey Turnpike.

Just over the Bridge the Third time I saw all brake lights: 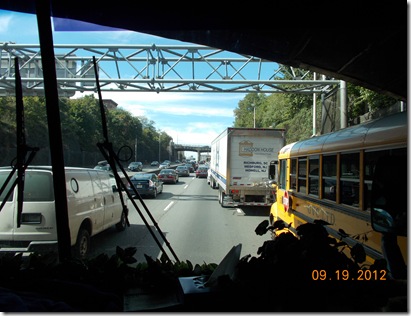 Dead stop with 4 lanes going to one. 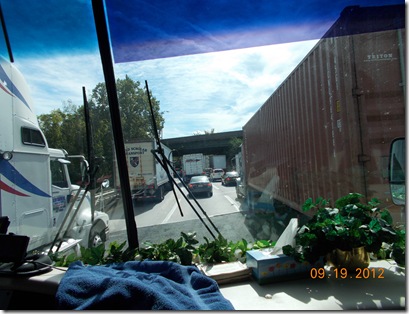 The New Jersey turnpike entrance is closed. All traffic fed to a feeder road. 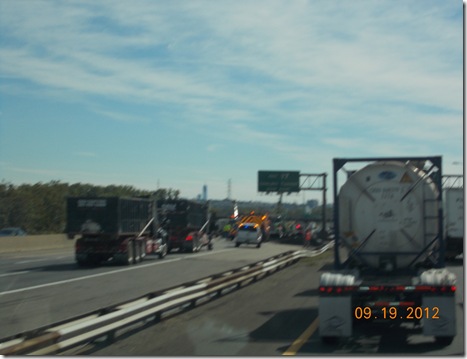 On the left is the blockage. An asphalt truck had rolled over. 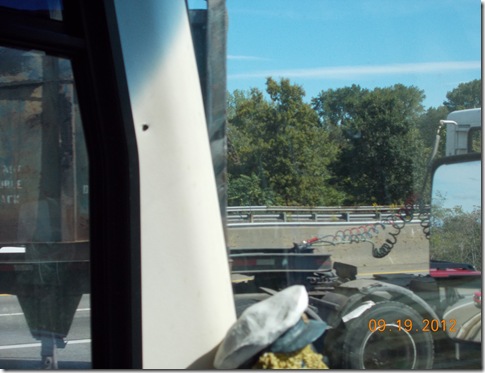 We did not get a full shot of the truck but it was back up, wheels down and being driven off. We were in the backup for an hour.

Finally arrived here at the park after making ten or twelve unnecessary turns because the GPS figured we needed to save 50 feet. It was not all bad, we got a lot of laughs at ME, for following a GPS and I knew better.

Thanks for going with us thru the outskirts of NYC, this writer at times was picturing driving down Broadway in the Motor home.

We paid $33 in tolls.  This southern guy hates tolls.

Thanks for reading this junk. 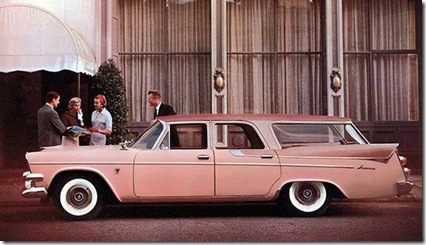 What an adventure!! Love GPS but they do have their disadvantages as you figured out yesterday. But I did enjoy the pictures, but not the $33 you had to pay in toll! Highway robbery!

Whoa, what a terrific ride. Thanks for taking me along!

I am sure you could see youself driving down Broadway. I have a cousin that took a wrong turn in a motor home...went right down 5th Ave. Scared the daylights out of his wife...lol.

What an adventure you had and a very long drive too. While I liked viewing the pictures, I'm sure you won't be taking that route again. Glad you arrived safely. Hope you enjoy the chocolate visit. I know Sherry will! After a nice sunrise it's dark and dreary again with a chance of rain and chilly too. I had to turn on my furnace this morning. It was that or wear a jacket in the house.

What an adventure!!! Advantage of an old car, no GPS. That is about the only thing good about it. You had quite a trip. Glad I could make it with you, SITTING AT MY COMPUTER! Pretty scenery in the distance. That seems a lot for toll even if you were lost, sort of. You had better stock up on chocolate if that is where you are going. Talk about excitement.

I think that is why I will stay away from NYC, I don't want to get lost there...too crowded for me...ha. I had fun with GPS going through Atlanta, had me get off and right back on 85!? I wasn't going to, but I thought it might be trying to help avoid the delay I was caught up in...not...I think I will stick to going around Atlanta on 285. Safe travels, Sheila

When we travel (which isn't often enough) we love the GPS. Won't leave home without it. You know what it's favorite phrase is with us, "recalculating". LOL ~ I bet you hear that one too.

Did you have your GPS on the shortest distance or without highways or something??? Just kidding. Well another wild adventure for Jack and Sherry. I loved the photos. Had to be a frustrating drive though. And $33 in tolls - ouch! Have fun.

No offense meant but I am glad that I wasn't in there with you two on that route.

I do stupid things all the time. And a truck sandwich is my least favorite kind of sandwich. ~Mary

You would have had to find the
ER and drop me off. What a hairy
ride. You know me and traveling.
I get lost in Belmont. Still learning my way around. I thought
about our B-I-L driving in NYC.

I know you were glad to get to
your destination and rest. Hopefully the rest of your journey
home will be smooth and no more
tolls.

I agree with Helen and Shirl. You made me nervous in that traffic.

I wish i could say it was seldom that I do stupid things.