I slept with a Radioactive Girl last night!

I enjoy Bill Cosby, he has always been one of my favorite performers. He is able to describe how I felt at some stressful points of my life. Have you ever been a new driver, on a hill, stopped at a traffic light in a straight drive car? Bill could describe my exact feelings.  OR: You are walking home at night down a dark alley or scary road?  He can describe the feelings. Then there is the one, son Jack loves, Bill steps on a plane, scared and says loudly, “HOPE THE PLANE DON’T CRASH!”

Another one I like. His ability to describe the feelings in the dentist’s office, when they x-ray your teeth. After placing a lead jacket over your chest, adjust the ‘LASER GUN’ then they step behind the shield and say, “BE very still!”  (He says, as I am shaking, why is she behind that lead shield?”)  LOL

While we are in this vicinity of NC, Sherry’s doctor tries to catch up on what he has missed (money?).  Well sometimes it is, this time it is a thyroid checkup/test/what ever?  Sherry said that the Doctor said, she needed to go to the hospital and take a pill, then return the next day for some super duper scan.

YOU EVER GO TO A HOSPITAL TO TAKE A PILL? I am thinking, this must be some kind of pill.

(side note: Do they pay all these folks that push the patients around in wheelchairs? I counted 20 while I sat there in  about 15 minutes. When I get old I want that job!)

After the paperwork, we were escorted into a little cubicle (yeah, I got to go in also). Mr pill man comes in with a lead cylinder, about 1.5” in dia and 6” long. Hands Sherry a cup of water. pulls a vial out of the lead shield and slides this little capsule out of it, into her hand.

I cannot hear most things, but I understood this, he looked at me and said: “No cuddling tonight!”

HE EVEN REPEATED IT TO HER!

HOW DID HE KNOW MY PLANS?

I told him, nothing personal, but I do not like you! Yep, she ingested some radioactivity, that slowed to a stop, my activity plans! SHUCKS!

Now you know how it is, when someone says steak is bad for you, it makes a T-bone look SOOOOOO good!

He ain’t said nothing about tonight!  Just so you would know! 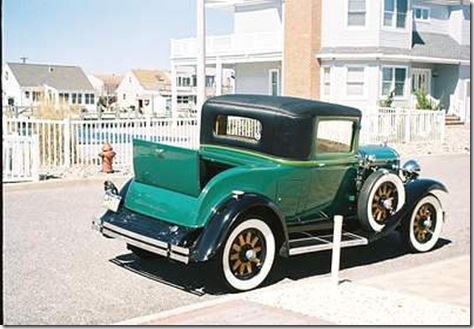 I have used this before, but something about this wood spoked wheels on this 1931 Chevy I just love! I would love to drive that to church on Sunday!

I never knew they had a pill for that. When my youngest son was having scans, he had to drink lots of terrible tasting stuff instead. Well he said it was like industrial waste anyway. He always made sure to drink plenty of liquids the next day to flush his system out. Hope all is well with Sherry. It's sunny but crisp morning in Ohio.

I haven't heard of that pill. I hope Sherry's test results are good.

The little car catches my attention and reminds me of one of my Dads stories. He and mom drove to Atlanta to a convention in 1934. They were newly-weds. More of the family were already there. Dad's older brother and his wife needed to come back home, so Dad let them ride in the car (one seater) and Mom and Dad rode in the rumble seat. Dad loved to tell this story.

Was that the one to kill her thyroid? I have the underactive thyroid and take a pill every day. One time I had to carry a card for a few days in case I was stopped after being injected with something. Stopped for what, I don't know. lol

(money)? Haaaaaaaa.
And the title of this post could be a song. ~Mary

hope everything goes well with her testing! As long as she didn't glow and keep you awake, I guess it was okay that she was a bit radioactive last night :) (but seriously, hope everything turns out good).

I know what you mean about getting a job like the wheelchair pushers (orderlies I guess they would be called?) Reminds me of a guy we saw sitting on a wall this morning; he was part of a survey crew, apparently was waiting for the rest of the people to be ready, but he was just sitting there in the shade. Told hubby "wonder how much he is getting paid for just sitting".

hope you guys had a good day!

"No cuddling" is way too ambiguous. I would want to know exactly how far I could go, lol.

Sure hope Sherry's test turns out o.k.! My goodness...that pill sounds dangerous. May the Lord be with her so the tests don't make her sick permanently.

Maybe there was no cuddling because like those little 'gloworm' toys my kids had, when you squeezed them they glowed...seriously, hope all goes well with the tests. We got rain today, probably all weekend. Cooler temps too, won't be long before sweatshirt weather. Have a great weekend, Sheila

HAHAHAHA!!!
«Louis» is going to send you a geiger counter!

That is one neat Chevy!

I hope she gets rid of the pill and the side affects ASAP! Good luck and hope all the tests come out fine.

When Marty's dad was alive his doctor gave him a radioactive drink. They were in a small room in the hospital, and she said "do not vomit that back up or they will seal the room off to clean it." I had to go on thyroid med's after I took Amiodrane when they were shocking my heart. I will take it, the thyroid med's the rest of my life . Hope all works out for Sherry. I only had half lung capacity but once I was off the amiodrane I regained all I had lost.