There are logging Roads and then there are LOGGING ROADS!

I was raised down south and loved to spend time in the woods and through them to the river. I liked to wander in the mountains. When we came to a road used many years ago, grown up but still two ruts where wagons hauled small logs and horses snaked large logs, we knew it was a logging road, or had been.

The AT crosses all kinds of roads, but up here in the North East you could get run over on a LOGGING ROAD. Some of these are dirt, but made for tractor and trailers. These guys do 40-60 mph in these big mamas in some places. Leaving dust that will choke you for minutes.

We had a problem when Gordon and I left the trail. How do we tell Mark we are not behind him? After getting Gordon’s ticket arranged, we left him with Jack and took off to a logging road that might intersect Mark. The first crossing there was no luck. We worked around to another spot on a rough road, and waited. Finally a couple came out headed North. The girl from Denmark and the man from Poland. We had some fresh water and some crackers and candy that they really appreciated. They remembered Passing Mark, we missed him again, But he was well and headed for a particular shelter. So home again where Gordon and Jack were having a good time, enjoying games on TV and two on the computers. 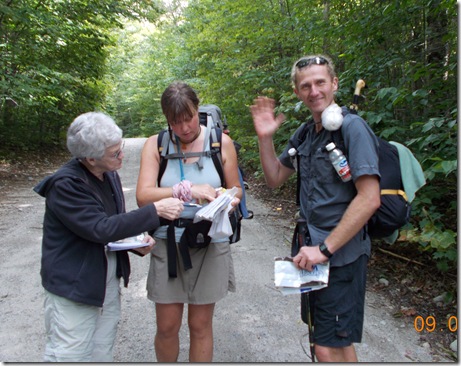 Going over the maps again we found a logging road called Katahdin Iron Works Road that lead a few tenths of a mile from a ford of the West Branch River. A ford he had to take and there was no way he could be past that point. We went prepared to spend the night if necessary. 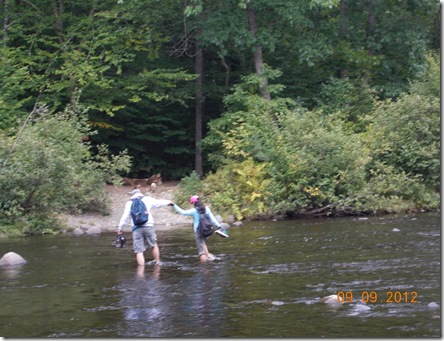 We loaded up with the fixings for ham & cheese sandwiches. Coffee, fresh water, cakes, candy, bananas and apples.  We were gonna play Trail Angels as we waited. This was really fun.Hikers love fresh stuff, and food they do not have to prepare. 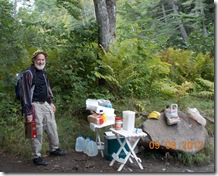 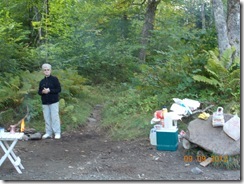 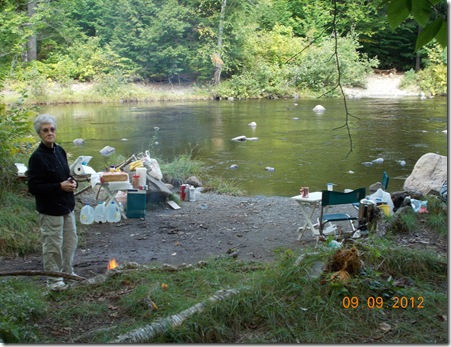 We also had Ice cold Pepsi’s! ‘Preacherman’ was our first customer 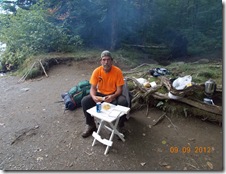 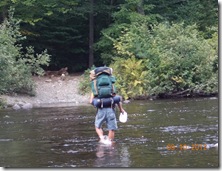 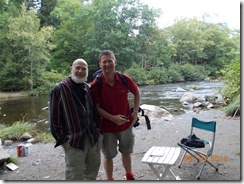 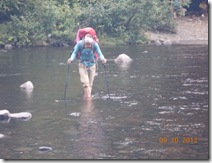 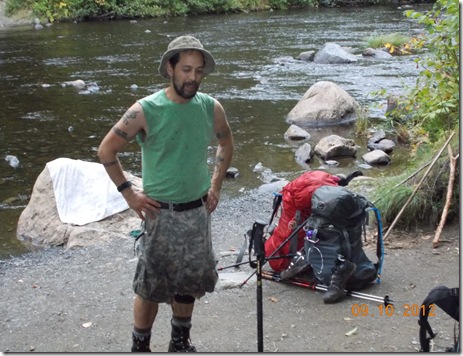 The Hiker above, ‘Late 4 Dinner’, practically ran across the ford without removing his boots to get to the food!

Finally the hiker we were looking for MARK! 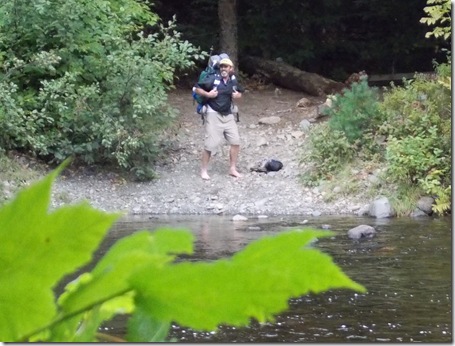 Mama was sure glad he made it, and it was getting late. He too, was glad to get a ham & Cheese sandwich.

We stuck around until all our customers were satisfied. and started hauling stuff back to the car. After everything was gone I was taking care of the fire, when three more hikers came down. They had heard of the sandwiches and were sorely disappointed. I said if you don’t mind walking another 2/10th mile I am sure we have enough left. All they wanted to know was which direction?

At the car we sat up again. 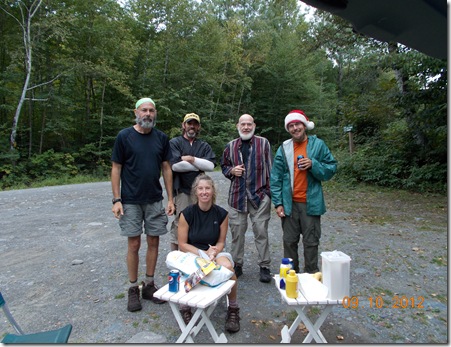 Once they were eating Sherry found out the couple was “The Honeymoon Hikers”. Sherry follows their journal, they were married at the beginning of the trail. Zeke was wearing a Santa hat. 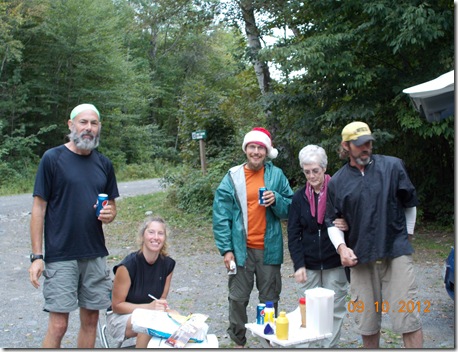 We headed home, our mission accomplished. Mark came home with us, ready to rest his feet after walking over 50 miles.

This is what I saw in Milo, ME. 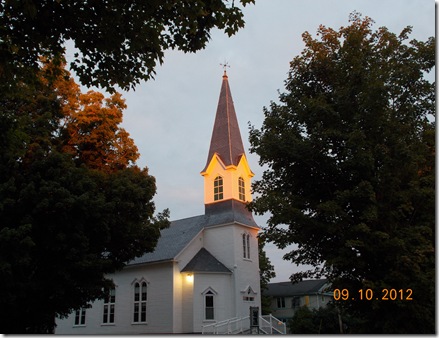 It was so brilliant on the steeple I turned around and went back for a photo. 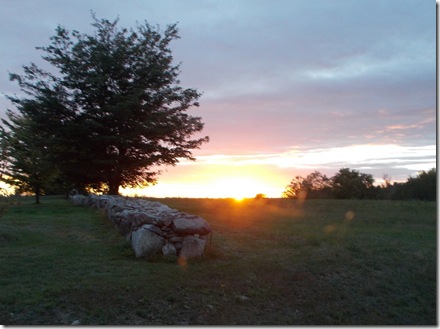 Sherry caught the sunset, the end to a perfect day! (but not the adventure)

In the past few days we have met folks from Switzerland, Australia, Denmark and Poland.

Also other foreign countries (to mention some) such as D.C., Miami and Memphis. LOL 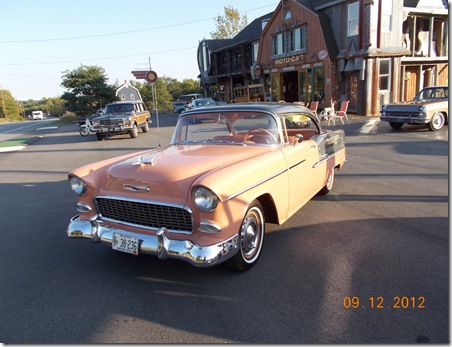 Bet Mark was glad to see you two especially with some food.

How life can, how life should be.

Please have you all a wonderful Sunday.

My gosh, I read back a few of your entries, Jack; Gordon does seem like a wonderful man to have done some of the trail with and to have met! And what generosity you and Sherry have to open up your motor home like this. Truly an adventure indeed! Love the pictures you shared; how neat too to be a Trail Angel and the people you and Sherry met including the Honeymoon Hikers; how cute!! It does sound like you have been enjoying your time on the AT; good for Mark doing 50 miles of it too!!!

I bet Mark was glad to see you all and the food. It's hard to imagine all the people that are out there hiking the AT. You both were trail angels for sure. What a welcome site it must be to find you have real food and drinks after so many hours of doing without. I'm a spoiled person for sure. I've never been any place that I couldn't take along my comforts like that. I'm looking forward to more sights from Maine. It's to be a cool night here in the 40's.

I imagine they were all thrilled to see you trail angels there with all that food and drink. Such a sweet thing to do for all those hikers. Hope your weekend is going well...Roll Tide... Sheila :-)

As I was and have been following you along the trip - I realize that it is much more than a hike. It is a personal sense of accomplishment. The comradeship of meeting new people from all over the world. And it is sharing and the breaking of bread together. No wonder it is something you and Sherry treasure.

Like those Trail Angels! It's late and I'm behind and this is the second time to try to comment.

I know Mark was glad to see you.

Trail Angels do a good job and
You and Sherry are good ones.
What a treat for the hikers finding
food. That would be fun just
being a Trail Angel.

I can see why you love hiking. Meeting all of those new people and all the different personalities. That is cool, The Honeymoon hikers.

ahhh... you put a warm spot in the ol' heart ~ how fortunate for those fellow hikers to come across the Trail Angels:) I can certainly understand why you love it so.

I have enjoyed hiking, but never have done any camping. I have always wondered if I was missing something. Now I know I am...is it too late? Lol.
Thanks for and enjoyable read.

Your hiking trip looks and sounds so much fun! I'm typing from my iPhone using an app called flipboard. So much easier to comment.