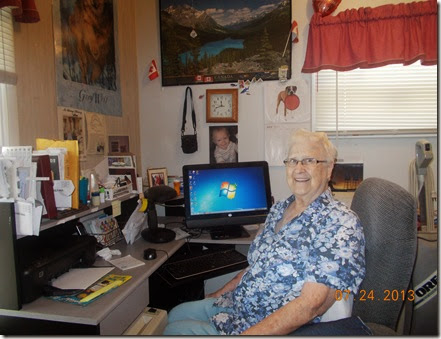 (Everyone knows the lady, no,she is not Jennie Wade, But what is the kid’s name on the wall? The date on the picture is almost a year ago, Picture taken in Nebraska!) 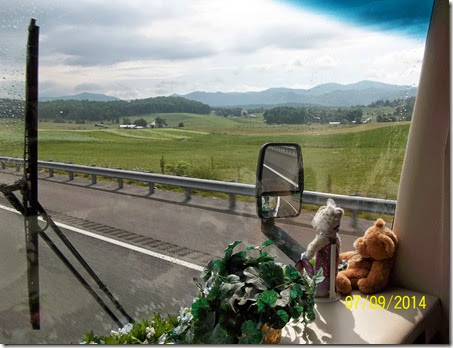 Leaving Lexington, VA  is the burial place of Stonewall Jackson. Washington and Lee University and VMI.  Much to see and do here, but we did the tourist thing here as we hiked the AT in this area. yeah, we hiked those Mts. 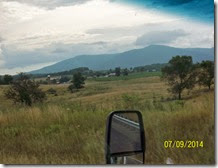 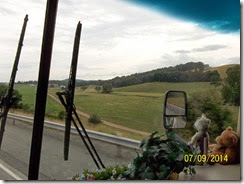 This is beautiful country of course and we enjoy every mile of it. And as was mentioned before, it is fun to look over at the Shenandoah's and know we walked that mountain range. The trail runs parallel with the Skyline drive and crosses it many times. It is a beautiful walk or drive.  Going South west the Skyline Drive becomes the Blue Ridge Parkway. 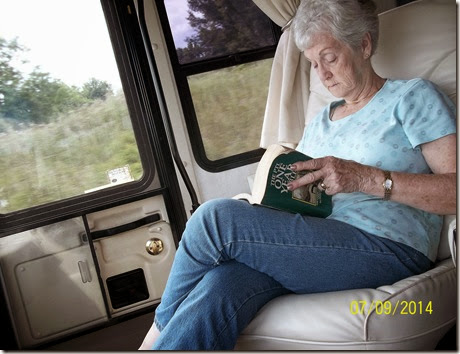 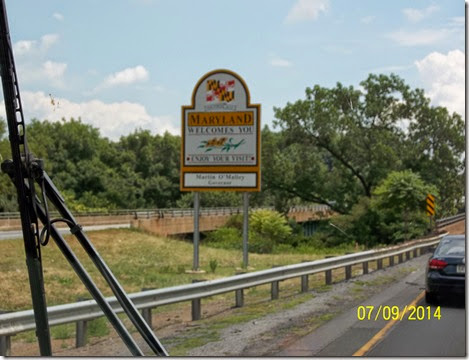 There was a couple funny incidents. I was about 70 yrs old when we hiked thru here and camped at one of the state parks. I learned what a hammered dulcimer is. I heard it all my life but did not know it was played with small wooden hammers. The guy we camped beside, made  and played them.

Then one day we were on a very narrow trail and thick brush on either side, Sherry leading. She sees a huge Buck with at least 12-15 points walking toward her. She turned to me and said, “What do I do?” Of being brave and behind her, I said, “Keep on walking.”  she did and when he got about 10 feet from her he flatfooted jumped the brush on the side of the trail, and walked off mad.  I got a tough wife, huh?

The other thing was as we walked casually on a fairly  clear area with some under growth. Sherry pointed to her right, just a few feet off the  trail and there lay a Doe, she did not jump up but just watched us go by like we were on display. 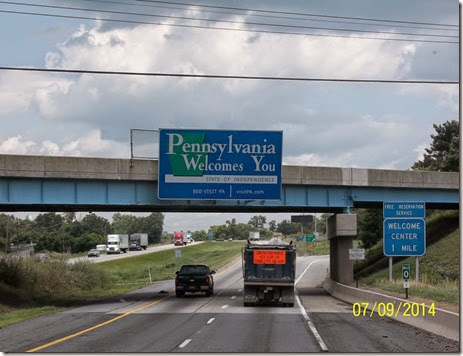 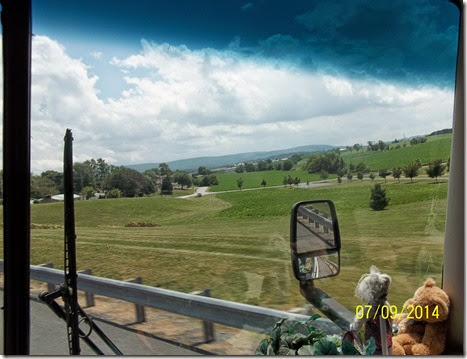 Pennsylvania is an absolutely beautiful state. We hiked thru PA (below are two hikers and their dog just off the Appalachian Trail where it crosses hwy #30. 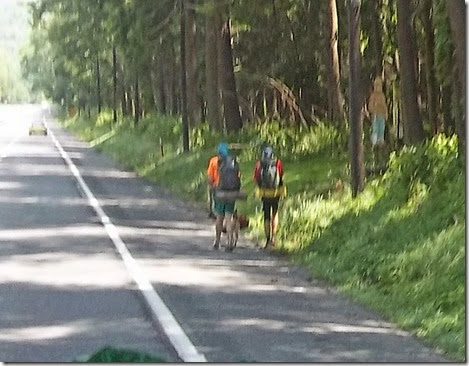 This my friends is the site of an American Tragedy.  This starts the area of the Battle of Gettysburg. 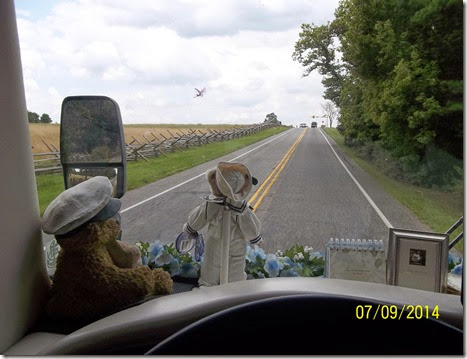 Having been here several times, I know this field. it is south of #30. at the very far end is where hundreds of North Carolina men came to die, and die they did. 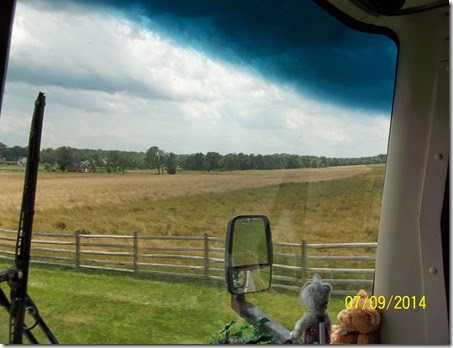 The Civil War.  Proof that politicians cannot be statesmen and discuss their differences and come to a rational end. We killed more or our own than have died in any war outside our borders. 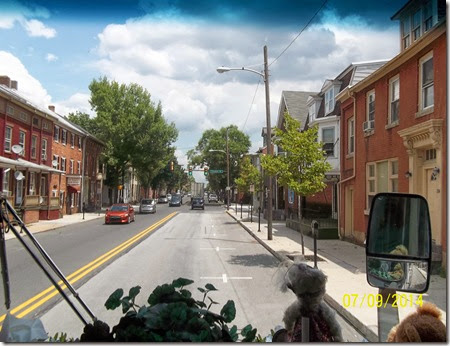 Downtown Gettysburg where Jennie Wade lived. She baked bread and served bread and water on the line to the Union soldiers. Jennie was killed in the kitchen, and was the only civilian casualty of the battle. Crossing the famous Susquehanna River.  To get to our latest home for a few days, Lancaster. 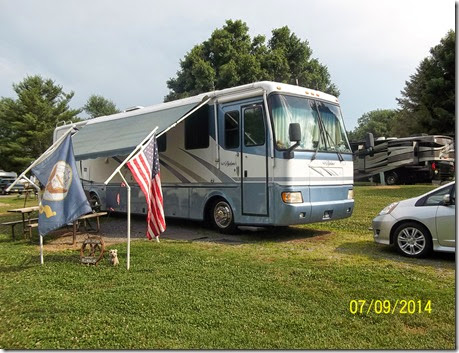 The Shenandoah's and the Great Smoky Mountains each have about 100 miles of Appalachian Trail. The Shenandoah’s are the easiest because there is a lot or Ridge running instead of up and down mountains.

If our experience is any indicator, there are more Bears in the Smoky’s but more deer and other wild life in the Shenandoah’s.

Today was a good day. Also, Hikers say Pennsylvania is where boots come to die. The rocks are tough on shoes. 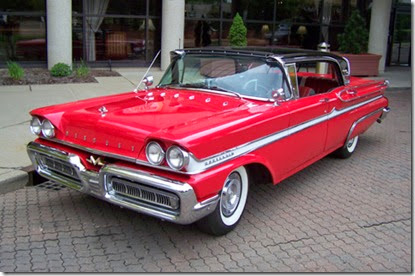 Absolutely beautiful country you shared with us today, Jack! It must be fun as you are driving to reminisce with Sherry about the parts of the trail you have hiked on. Glad you got to another destination save and sound!

A trail along the ridge makes a lot of sense to me.
Nice country. Relaxing pics. I like knowing Sherry has a prayer list.

I'd say you are making good time there. What a beautiful spot to rest for a few days you have there. I enjoyed the bits of info on the history of what you've seen too. We've been having some good weather here. Hopefully you all are too.

I almost missed this one. Love the picture of Sherry reading her bible.

Beautiful country and I feel like I am traveling again. That kids name is Christopher. and he is onery as sin. Still working on many things that don't come easy for him. He would live in the water, snow or anything outside if he could. I was very surprised when I ran across the picture of me and my messy desk. You and Sherry were the best surprise we have had.

It's good to be back, Jack and Sherry! It's been many years, but remember Pennsylvania as being so lovely.

(I've been off the grid a few days - presumably helping support my dentist's lavish lifestyle.)

Love the image of Sherry and her Bible. I've a hunch Tom may have been on her list? We had a spot of great news on that front -- last Monday they decided it was time to remove the port in his chest!

Is it just the driving, or is there a stronger, deeper correlation...you know the being married to you & all that bible reading :O? Nice to see you 2 are doing well. ~Mary

Don't know how Sherry can read when you're driving. Makes me dizzy. Love hearing about the deer, there was one outside here just this morning.