Photo from the past: 4H convention in 1941 at Iowa State (That is sorta ironic that Darla just mentioned their 4H club.) 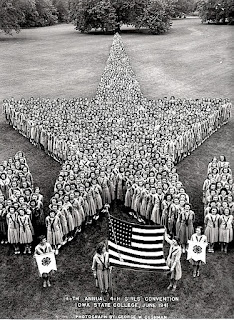 Irony: a technique of indicating, as through character or plot development, an intention or attitude opposite to that which is actually or ostensibly stated.

It is irony, I guess, that I think I am a writer and have a very weak or limited vocabulary.

It is Irony that Sears and Roebuck started off as a mail order business then went big time in the brick and mortar stores and are now fighting for their life against basically a mail-order business AMAZON.

It must be irony that the Post Office (USPS) management years ago decided there would never be enough business in delivering packages and cut back by raising the cost of mailing a package. And then years after that decision find that packages have financed fleets of planes, trucks and deliveries for UPS and FEDEX.

It is irony also that the USPS is now delivering for AMAZON on Sundays in many cases.

It is Irony, and sickening, Detroit auto leadership considered imports trash and not competition. Instead of reading the writing on the wall, they helped make a wasteland of Detroit.  CEOs and Other leadership are paid to see into the future. Register trends, note changes in their industry and adjust.

I am not sure it is IRONY that A man called Walton in Arkansas, started a business that is putting others out of business because they did not take him serious. It is hard for my mind to wrap around the idea that Sears and K-Mart with stores already built, logistics in place for storage and delivery of goods to their stores can be overrun by an upstart called Walmart.

I would have thought the CEO of K-Mart would remember they put Grants, Roses, and a few others out (or nearly out) of business to get where they were and be looking over their shoulders for the next up start, but they missed it.

Funny that… Walmart is playing catch-up with AMAZON, will they make it, or have they waited too late to provide next day delivery? 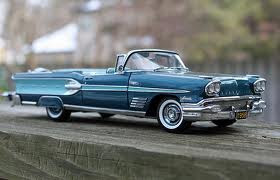 A lot of good thoughts there. you know Amazon is taking over everything - I am glad to see a little competition for it with Walmart.

Interesting. My grandson works for Fed-Ex and does he need that job. Got married, they have a baby, then the wife needed a new house. Why can't young people wait for things? It was a surprise the way Walmart took over.

Between everything we can do online and have delivered to us, we'll never have to leave our homes. Can't remember the name of the company, but hubby was telling me about a company from Europe that actually can offer lower prices than Walmart and potentially can put Walmart out of business here; little by little its building stores in various areas. I really think its the online purchasing that will put a lot of stores out of business. All stores are encouraging it; better selection on line, at times free delivery, etc.

Yes it is all ironic. Amazon is growing in leaps and bounds. Many business are being bested and it's sad. I'm one who actually likes to see what I buy and it makes me wonder every time I see another store close. Walmart is not my favorite place to shop but the two in my area are always busy. It's ironic for me who loves to read books that now I order them all from Amazon to ready on my Kindle. Life is full of ironies for sure.

It is ironic that so much good has gone by the wayside. Perhaps the most bit if irony is the fact that when morals, faith and hope fails, the world tumbles. Sad but true.
Happy Anniversary you guys....it's 61 today, isn't it? I recall because you share your day with B's son's birthday and that of Mom's sister who we all miss terribly. Have a wonderful one.

But yet they continue building Family dollar and dollar general stores on every corner while the one down the road is fighting to stay open. Irony!

I need to look more at Amazon. Never quiet understood it.
Lisa

The World and things are changing so fast it is not easy to keep up with
all the changes..Every Company want to be first..and changes will continue.

Great examples of irony, Jack! I had to chuckle about the USPS. (But NOW I know why Tom and I spotted two USPS vehicles in our neighborhood last Sunday.)

I'm not a fan of Wal-Mart and we're (still) boycotting Target, so Amazon's our go-to. Truth is, I'm a lazy so-and-so, and much prefer shopping in my PJ's in front of my computer monitor than having to deal with John Q. Public. LOL!

PS - I love that picture of the 4H convention! My dad so hoped I'd become involved in 4H, but there was no interest among the citizens of Los Alamos.

i love amazon. it's our go to place.

I'm with Taryterre. I use Amazon a LOT. I'm not an impulse shopper. I research what I want and Amazon sends it to me free.
But you make very good points. I think a lot of businesses fail or don't thrive because of lack of vision or a vision that is totally wrong. The CEO at IBM gave Bill Gates the proprietary code for running personal computers because he said the public didn't want a PC in their homes. Now people have them in their pocket or wear them on their wrists.