They say it is Progress

My last WHY for awhile: 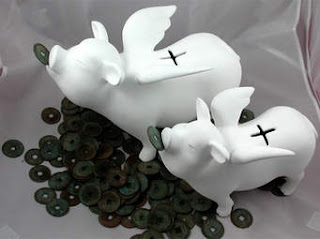 Why are many coin collection jar banks shaped like pigs? (see end)

Today was the day for my blood work.  We traveled a very familiar route.  My dad was a Church of God pastor.  When he retired he and mama lived in a cabin on the COG Camp Ground. Other pastors, widows and widower lived there. Over the years a college was established there also. My dad passed away and mama lived alone there but it was a good community of likeminded folk. They looked after each other, the crime was zero. It was a safe place.

However as the Camp Ground grew so did its neighbor the Douglas Municipal Airport.  It became Charlotte Douglas International.  So the city bought out the Camp Ground and hundreds of homes and businesses. 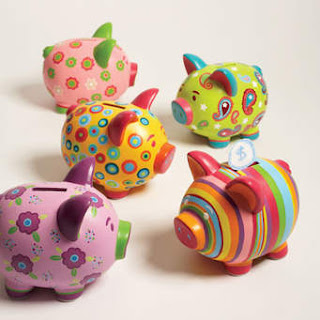 It has been years since we drove this route. The campground once thriving is grown up. The college buildings have been razed. The hills on past there that housed a couple famous restaurants and several businesses are now parking lots. There must be room for a half million cars, that is no exaggeration. We found roads re-routed. Some dead ended and a spot where I loved to go to a Flea Mkt was now filled with dirt and loaded with FEDEX trucks. 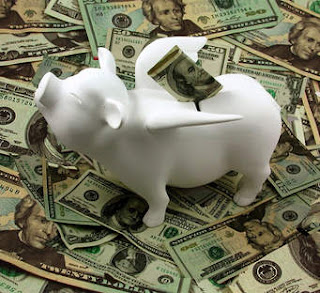 But as has been said thousands of times ‘that is progress.’ There was a creek (I could not see today) that held so many ‘boyhood’ memories of fishing, swimming and jumping rocks. The creek must be in huge pipes now.  Hey that could be fun, BIG CAVES, but I am not sure boys around here would have time for that now.

Times change, the years slip by when you are gone and you think everything remains as you last saw them. Funny that. It was at least 50 years from the time I last saw Buddy until our reunion with him and his bride a few years back. I remembered a feisty guy in his teens, THE DUDE HAD GOTTEN OLD! I ain’t kidding. Now, how that old guy got that pretty young wife I don’t know, and I ain’t asking.   LOL

Yep even in the south, things change over the years. I don’t always like it.  LOL 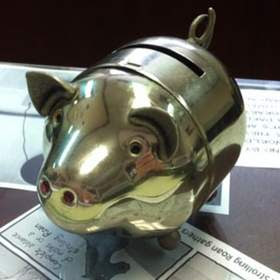 BECAUSE
Long ago, dishes and cookware in Europe were made of dense orange clay called 'pygg'. When people saved coins in
jars made of this clay, the jars became known as 'pygg banks.' When an English potter misunderstood the word, he
made a container that resembled a pig. And it caught on. 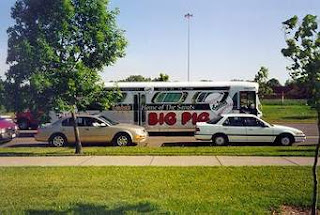 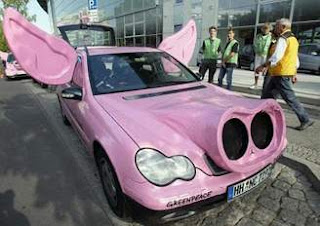 Change is a bitter pill, indeed. For a while, I was really bent on taking a little trip back to my hometown. Fortunately(?), because I belong to a "Remember in Los Alamos" Facebook group I've been witness to hundreds of photos reflecting so many changes. The high school was the last straw, and I told Tom I'd just prefer to remember it in my mind's eye.

Methinks Tom and I need to adopt a piggy bank!

As you know I love Baby Pigs...I have a lot of pigs statues I have never lived where pigs were raised and have no idea why I grew to love baby pigs.
I enjoyed reading about them. I do remember old times and they were enjoyable. We had a wonderful growing up and I am grateful.

I still have a piggy bank from Elementary school. A boy drew my name at Christmas and that is what he gave me. I was so disappointed, I wanted something more girly. I kept it all these years anyway and it sits on the floor of a closet with lots of pennies in it. Did you know you can take a table knife and stick it in the slot with the bank and slowly get change out as you shake it. I should do that there may be more then pennies in there.

Where hubby grew up in Southern California and we lived there for a bit, there was an area of undeveloped land that he used to run many miles of practice for cross country on, stepping over rattlesnakes and other hazards. We were amazed to go back on a visit about 15 years ago and see how much growth had taken place and the areas he once ran were now developments after developments of housing. Growth does happen, even for those who resist it.

I didn't know that about the piggy bank how it got its name. We don't per se have a piggy bank but do have a savings account that automatically monthly gets at least a small automatic savings deposited into it.

Never knew that about the piggy panks. Yes I have a couple around the house....Empty.

Yes I do have a piggy bank. It's fully of pennies. I guess I'm saving them for a rainy day. It is amazing how places change over the years. I'm one who'd rather see an old building fixed up but too many these days are just torn down and lots of parking lots take their place.

I never was one much for change, unless it jingled in my pocket....it, too, ended up in a piggy bank. When raising a houseful of youngsters, we used to take our camping vacations on the money in the piggy bank. It was always just enough. All the schools I ever attended have gone through change, the best were demolished, one now is an appt. building, another the houses the city hall, fire dept. and police dept. Our favorite gas station has now been leveled making room for a Quik Trip. We used to have a convenience grocery store on our side of the river, we are now down to one to service the entire community so we travel to get there. Even the 4-H club we belonged to has merged with another with new names, just like the schools. True, I do not like change.
love n' hugs from up north where the leaves are going thru ' change ' but it's pretty.

We have been here over 30 years and the streets have all enlarged - and the building on it is amazing - I can't even remember it like it first was.

I LOVE THAT PIG CAR!

time changes everything unfortunately. loved hearing about the piggy banks. mine is packed away.