Why did I do this, it was Stupid! 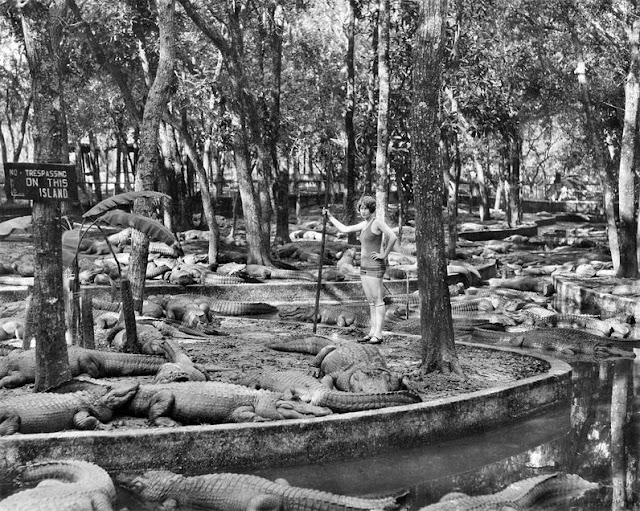 (Now if I wuz in the middle of the Gators, I would ask myself WHY??? There is a no trespassing sign!!! Before you say anything, notice she does have a stick!)

Have you ever chided yourself for a decision you though was a great idea. I know that some folk regret changing the color of their hair! I know some ladies who WISH they had never tried another hair do!

Some folk pick a new car, the color is just what they want, until about three weeks and the color starts to grate on them.

I remember a good friend who was sold on the ‘Wankle’ engine in the Mazda car (I think).  The Wankle was a rotary engine that was going to revolutionize the auto industry. I saw him a year later, he had decided  ‘It ain’t gonna be in ALL cars in three years!”
I am not sure if the rotary engine is still in production.

My son Mark knows real-estate and houses, he knows nothing of bonds and investments. An investment adviser suggested he buy into some stocks for his children. He became an investor. He lost a few thousand $. The investor came back, you need to pump some more $ in. He realized what my dad always said, “Don’t try to play someone else’s game,” He regretted it, took his loses and got out@!.

So this is about?  We hit the road this morning. I was sure I needed shocks on the Motor home, so in the past few weeks as the coach sat, I changed the shocks to some pricey shocks. I can’t wait to try them. WE DID this morning. The coach had NEVER ridden this badly. I am kicking myself, saying a bad word. Found a spot by the local soccer fields to see if I can add some air to our air bags. WE had traveled about a mile. You would not believe the ride, bouncy, bumpy,crazy bad at 10 MPH..

Told my sick looking lady. I will crawl under and re-adjust the air bags. This thing has no springs. It took about 5 minutes. I crawled out from under the coach, let’s try going around the block.

Just after we started rolling we realized there would be no need to go around the block. It rides like a new coach, but for about ten minutes there, I could see myself changing back to the cheaper shock.  LOL

Nite Shipslog  (We will over nite in South Carolina, Florida tomorrow) 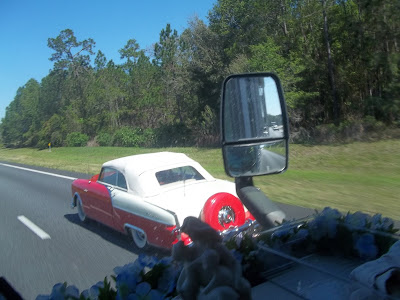 This mid '50s Packard convertible passed us on the road.
Posted by jack69 at 3:44 PM

I don't know anything about an RV shocks - but I do know a lot of things I have done I wish I hadn't!

So glad you got Ms. Sherry off that "carnival ride"!

Trying to remember my last episode of buyer's remorse, and all I can come up with is THIS house. Oh, there's nothing wrong with it; I just grew weary of looking, and looking some more. Never paused to consider it wasn't True Love.

Glad the shocks got adjusted and the ride became smooth :) I don't have remorse, but sometimes I wonder "How the heck did we end up in Phoenix?" Then I remind myself of the reasons we did and I still think it was a good move :)

THAT alligator farm looks scary. Glad you got your shock absorbers fixed for the trip south. And there are no more bumps in the night or daytime.

Hahaha Melevy’s comment above made me laugh!
To the photos defense, I always heard an Alligator is usually harmless to man as they are not aggressive. However, the crocodile is assgressive and will eat you up! You will need more than a stick.
A little fact: alligators are usually found in fresh water. Crocodiles are usually found in salt water.

You are definitely one handy man to have around. So glad you could get it fixed and are now on your way. Prayers for a safe and happy trip!

Gosh, so glad the ride was adjusted to the good. I can't take bumps too well.
Glad also your trip's going ' smooth ' because of your wisdom. You go, Jack~!
love n hugs from our long day picking, washing and loading pumpkins....it's all good. Bill, brothers Eric and Randy, Colleen and I did the heavy work while Mom was the ' counter.' We sat her in a lawn chair in the middle of the wagons as we loaded. What a great day....and no bumps. lol