Sorry Sir, Publix does not have Ice we have.....

WHY?
Why is someone who is feeling great 'on cloud nine'?

Wednesday  we drove down to Deltona and see for ourselves how things were. Everything looked good.

BUT the real story. To start with, this was not our first Rodeo, but you would have thought so. I was smart enough to carry extra gas to ensure the trip. Most of the exits were blocked by law enforcement in Georgia. We found fuel in St. Augustine and had no problem in that area. However it is pretty ignorant to enter a hurricane zone and not come prepared. LOL

We checkedout our home, it looked good. Few limbs around, no power and needing fence repair, we knew that.  Sherry said, “We need to go to Walmart and get an ice chest and some ice.”

WE were at Lowes when it hit me, they were sold out of rakes except the small ones. “Honey,” says I, “We are a few days late and a dollar short, as the saying goes.”

Of course the shelves were empty of Ice chests + Absolutely NO ICE. LOL (WE are supposed to know this!)

We also needed to find a car charger for the cell phones. Of course they were sold out. “Try the auto section,” suggested the clerk. The lady at the auto section walked us around the empty shelves. “Oh this is the last one we have. This one must be hard wired into the car.”

“We’ll take it,” at least we had success in one area.  A clerk at Race Way wouldn’t let Sherry pay for two large cups of ice. She was ecstatic.

So now we had ice, and a charger which I wired into the car in a few minutes. A great (hot) night of quiet and talk. We read by flashlight (I did think to bring 3 + extra batteries.). 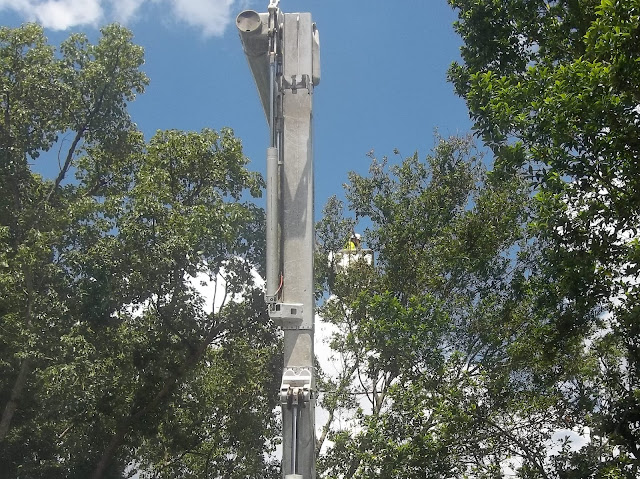 We were really having a good time. No TV or monitors, no noise except the night creatures.

Second evening, we went for a frosty at Wendy’s. Oh yes, the clerk GAVE Sherry a big cup of ice. (Sherry loves to eat ice).

Leaving, I said, “I am going to check Publix for ice.”  I couldn’t find an ICE BIN. I stopped a young worker and asked, “If you had ice, where would I find it?”
Sorta grinning he said, “Sir, Publix does not have ice.  We have frozen water.”

“Okay I will bite, where will I find frozen water?”  I followed him to a huge freezer with clear doors. Inside I found gallon jugs of spring water frozen solid, 79¢ each.

Tapping a jug, “VOILA, FROZEN WATER!” he said smiling, and walked off.

Of course I took two, Now 'I smiled' thinking, 'I am sure the kid knows ice is frozen water, doesn’t he?’ 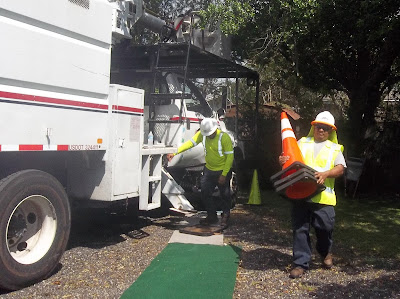 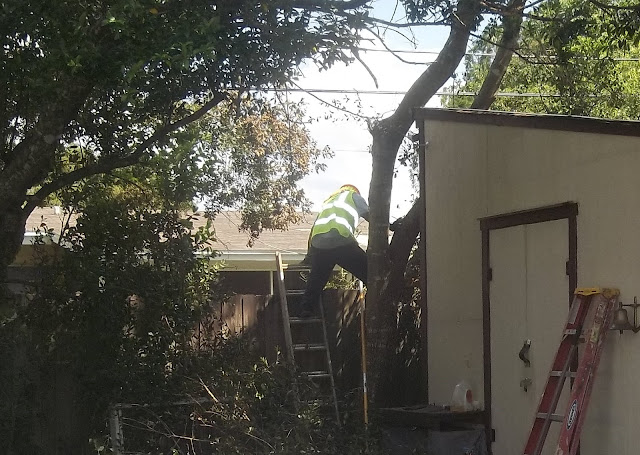 Anyway, all is well. A crew from Shreveport, LA fixed our power. Sherry washed a load of clothes, we enjoyed a day and night of A/C before we headed to NC to take care of business here before returning to our love nest in Florida in a couple weeks. 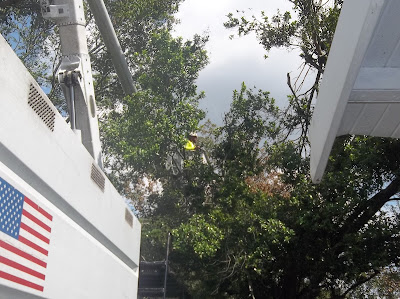 These Bucket trucks had more reach than any I had ever watched. It was neat to watch knowing soon you would have power.


It is cloud 9, BECAUSE
Types of clouds are numbered according to the altitudes they attain, with nine being the highest cloud. If someone
is said to be on cloud nine, that person is floating well above worldly cares.

It took a genius to come up with Frozen water dont ya think? Haha. Ok here is the difference. Ice melts and then you just have dirty spilled water. Frozen water can be places (un opened) in a cooler or fridge and will keep it cold. Once the water melts you have clean drinking water.

Glad you were able to get things in order and the house is fine. You'll be able to pick up a rake back in NC for when you come back down to deltona. funny about the frozen water.

I'm still typing reports when people are without power down in Florida. Glad it seems things are coming together for you in Deltona and the damage was relatively minimal.

Gosh the littlest things we take for granite - don't we. I am glad you checked on your home and it was not too bad. Be careful in your travels back north, sandie

That's really cute about the Publix ice. Good fodder for repeating 'round the water cooler. And the clerk who wouldn't take money for Sherry's ice? Little things sure mean a lot.

PS - I'd never heard of Duke Energy, but saw on Facebook where a former co-worker propped a sign in his front yard in Largo: "Dear Duke, Will trade beer for electricity."

So glad to see your home is ok and the power has been restored. We don't realize how much we rely on it til it's gone. Safe travels dear friends. I sent you a pic of a few of B's potatoes and something from me too
love n' hugs from up north. Yesterday was 85 and today there's a fall chill in the air.......it's almost time to hunker down

Well, I'm glad the store thought of freezing the jugs of water. And it's good that you knew how to hardwire the charger; not everybody would know how to do that (which is why it was still on the shelf, I guess).
Good to hear that your house came through the storm.

Like that about the frozen water. Sounds like a good idea but don't know if the young clerk has a clue.

The frozen water was a great idea. We didn't have any damage here in Empire. In fact, the storm did $1000 worth of improvements. It blew down a dead pine tree that was going to cost a fortune to have removed :)