I could be spending life in prison, with no friends or family! 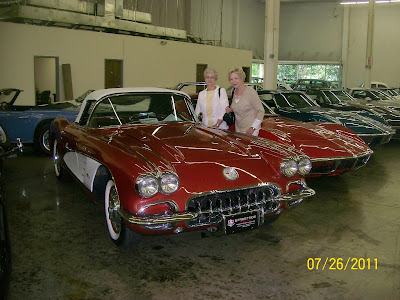 Sherry and Shirl looking at a corvette for sale.

And now:
Life takes so many twists and turns. If you dwelled on the “WHAT IF’S IN LIFE,” one could become sick.

Every once in a while my wife will bring up the first ‘possibly tragic’ incident in our married lives. She did this again on the Mother’s day just past.

She was saying, “It is a miracle I did not drown before our first anniversary, I would never have been a mother or enjoyed family!”

I said YES, and I could have been convicted of murder and sentenced to life in prison for drowning my wife. I could be in prison as an 80 year old man with NO sons and most likely no friends on the outside.

“Oh no,” said she, “No way they would have thought you drowned me?”  Of course I would have never drowned my sweetheart.  But no one would have known but me. There were no witnesses to the event. Who knows what would have been ruled?

We went to a lonely section of an Atlantic beach. We were newlyweds. We were swept out to sea by a Rip Tide. I was a good swimmer, she was not a swimmer. I was fighting the tide and keeping her up. She was worn out from trying. After about 15+ minutes as I was holding her and treading water with the other arm, she became calm and said, “I give up,” and pulled loose from me and started sinking. She had long hair. All I could see was that hair spread out in a big dark circle. Her action stunned me for a second. I reached and grabbed her hair pulled her head up and said, “No you don’t, people will think I brought you out here and drowned you!”
It was tough, but of course we did get back to shore, and now 62+ years later are still above ground and water.

I have always knew, it was her sacrificial nature thinking I cannot make it, save yourself. I could not lose a treasure!  After all I was a Marine. ;-)

I feel sorry for people who live the:

What if?
I should have!
Why didn’t I?

FACT!
We all face death and injury daily on our highways. We should be aware, one swerve by the other guy and..... but not live in fear of it.

You were certainly Her Hero, Jack. What a heart-warming story and who knows what people would have thought. Stranger things have happened and ruined innocent peoples' lives.
Have a wonderful weekend enjoying life- Hugs-Diana

Wow, Jack. This has given me goosebumps!

Deep-down I've always been a 'what iffer.' But as you've pointed out, short of cocooning myself in bubble-wrap and never leaving my home, there are no guarantees. Yours is wise counsel.

Oh my goodness, a story I've not heard. Thank God you could see her in the rip tide swirling water, such a good outcome from a dangerous ocean. That was a close call!!!

Gives me goosebumps - I loved that story.

you saved her life. no jail time for you.

Wasn't Sherry's time to go so God gave you the strength to do what needed to be done to bring you both back to safety on the shore. Both your sons had to be born as well as the grands and great grands that came afterward. Thankful that it was like this and not any other way! I have a healthy respect for the ocean. I know I'm not a strong swimmer so I stay in the very shallowest of its water not venturing out from about knee level. Those riptides are indeed very dangerous!

I haven’t heard that story before; what a harrowing experience for both of you. I’m so glad you didn’t give up on Sherry and that you both survived.
God bless you.

Oh my, that was an experience for sure. You are forever the hero for saving your fair lady. The world would have definitely been a different place had you not succeeded. Don't even like to think about that one for sure. You two were meant to be!

It's amazing how our Good Lord works His miracles. I try not to worry about the ' what ifs ' even when there 'are times.' The older I get, I find myself turning things I have no control over, to God. HE, afterall, knows all and always has a purpose. We aren't meant to understand the thinking of our Greater Above. love this story. I'm sooo glad you both were given strength to be saved. I cannot imagine a life without your genuine hearts.
love n' hugs from up north dancing in the rain.