Local cats minus one 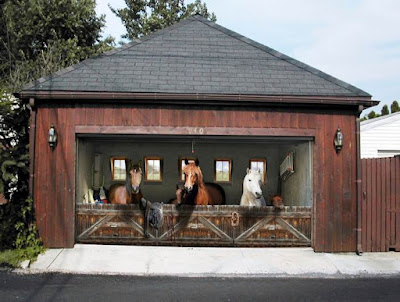 Don't you love this Garage door painting? I would definitely do a 'double take!'

And now:
I call her ‘my cat’, and because she is feral evidently has sex and has had two litters I know of.  I named her Stormy D.


I spent today waxing the motor home that is a big sucker when you are applying wax (38.5’). In search of another ladder I drove out, I saw the yellow Tom lying in the middle of the drive (not unusual). I slowed down for it to jump and run. I straddled where he lay. Glancing in the rearview mirror he was still lying there. I said aloud to no one, ‘that sucker is dead’.

He was, I buried him. I did not read scripture over him because the sucker is lost beyond hope taking advantage of Stormy last year when she was just a young kitty. The dude was twice her size. She is probably pregnant now with his kids and he won’t be around to support them.

Honestly I did not mind burying him, I didn’t like him. He was a real sneaky cat. I am sure he just ‘died’ no one could have run over him in the drive, cats are too fast for that. I saw him chasing Stormy a few weeks ago and he was very fast.

I did not take time for an autopsy, just to make sure it was a Tomcat, so I would not be accusing him unwisely. LOL

I am sure there are plenty of Toms out there to take his place. When I told Stormy, she did not cry nor act like she cared. She didn’t even ask where he was buried. I had suggested she scratch his eyes out several times, but I was ignored again.

I do not like it on one hand and on the other hand, I admire that independence in a cat!

New Study of Obesity Looks for Larger Test Group
Weren't the last ones big enough?!
Posted by jack69 at 9:29 AM

That garage door mural is awesome! Happy to hear Stormy is still a feisty presence in your world, can't say I'm sorry about the old Tom Cat.

That is a cool garage door! I bet it would get a lot of people driving by to want to see it (I know I would). Poor Tom Cat. That was nice you buried him. Cats are quick but every once in awhile they seem to not be quick enough and they meet their fate. It too amazes me how feral cats make it out there but they do. I welcome them for the most part as I know they help keep the rodent population down.

That's such a cool garage door. I might even be fooled into stopping to pet one. HA!
I love your conversations with the animal kingdom. Like in the old west novels you favor, justice is swift and sometimes difficult.

Well I hate Stormy lost one of her mates but it’s one less cat you have to worry about. Maybe next time Stormy has babies she will have them in the garage so at least you can see and tame them.

Back in Gtown
Lisa

Hi! I came over from Betty's blog and have read some of your posts. Fun and clever! I hope you don't mind a new follower and visitor. I love the garage door and I did take a second look! I'm not a big cat person but I'm glad you gave that Tom a nice burial and a not so fond farewell. Maybe Stormy needs her Saturday night privileges taken away. We have something around these parts called the "Rascal Unit" or some call it the "neuter scooter"...anyway, it's cheap! Have a good week!

Farewell ol'yeller Tom. I must say, you done a nice thing burying the fella!
I'm sure Stormy D will find a quick replacement. Cats are not particularly finicky. Has Stormy brought her kittens around yet and are you still having a raccoon problem? While cleaning out our uncles storage sheds, we found 4 of those large live traps. My brother just caught a rascally coon and transplanted him a county away. He killed a couple of mom's ducks so he had to go. Have a wonderful week of adventures.
love n' hugs from up north where we were blessed with the warmth of the sun.