We men know little about women (at times) 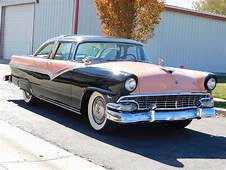 This is a 1956 Crown Vic Fords best that year. Friend Corporal Virgil Jensen from Kirkman Iowa,owned one


Today:
AT times I like to think back to time aboard ship,  I loved the sea. When the skipper asked me to consider staying aboard I told the him, "Sir, I would stay forever if you allowed Sherry aboard to live.
I will never forget his words, “There will never be a female aboard a Navy fighting ship.” I headed for
GITMO and never saw Capt. Hill again.
BUT now Captain Hill could see this aboard his old ship: 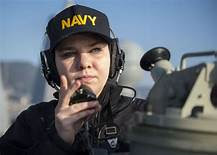 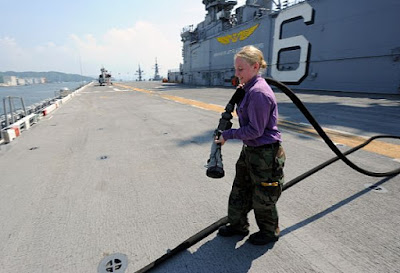 And then this can be seen: 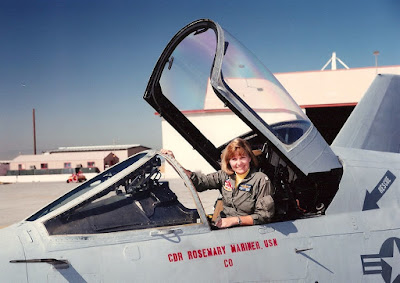 In my last tour in the USN in Washington DC, I was privileged to have the best worker I ever had work for me. She was Petty Officer Third class Lois Brown In addition she was a single mom.  She was never late, and very different from other single parents male & female, NEVER called in saying I won’t be in today with an excuse of: Baby sick, no baby sitter, etc. She was on the job and produced.
She did call in once, the night before. “Chief my babysitter is sick, what can I do? “
“Is your daughter well, can you bring her to work?”
“Could I really do that Chief? She is well behaved and will be no problem.”
“Then do it.”
She did. We worked in the  2nd largest building in DC. The little sweetheart sat at an extra desk, drawing and coloring. She gave not a minute’s trouble. Towards the end of the day I got the message from the ‘Old Mans’ office. “I hear there is a child in your working space. That is too dangerous here. She could be hurt and there would be hell to pay. Take care of it.”

I explained that to Lois, and let her off early to satisfy the ‘Old Man’.

Weeks later there was a child pushing one of those little ‘Pop-pop toys’ in the hall running from side to side. I asked around who the boy belonged to. “It is no problem, it is the ‘Old Man’s’ grandson.”

I said to my fellow chief, “Oh yes it is a problem, the kid could get hurt and there would be hell to pay. This is a government office.”

Finally in my life I had reached a point where I could exert myself, I walked by the secretary and into the ‘Old Man’s’ office unannounced.

Surprised and looking up from his desk, “Yes Chief, is there a problem?”

I then unloaded about Lois’s daughter and his orders of the dangers of children in government spaces.

His response was like a kid caught with his hand in the cookie jar, “I understand chief, I will take care of it immediately!”
I walked out, sorta proud of myself, I KNEW I was right and he did too.
Nite Shipslog
PS: Lois is a beautiful woman of color, my son Jack said he proposed to Lois once and she turned him down. Jack has now been married twice,  I have  wondered……… ;-)

Its great to see women pursuing careers that they want even if some "old school" people would not like it. Lois did seem like a good worker! Its got to be a nightmare for single moms finding childcare especially when the person they thought would be available was sick. It was kind of you to let the little one there for the time she was there.

Well GOOD for you! At least the "Old Man" owned up.
Different sort of scenario altogether, but this reminded me of an incident at my mother's church. Granddaughter Chloe was being baptized, and I'd hoped to video the sacrament. But no, per the minister. Not a year later, one of HIS relatives' babies was being baptized and of course, they allowed not one, but two videographers.

Now I'm wondering if y'all have kept in touch with your 'best worker.' I've a hunch you were the best boss she's ever had.

Kudos Jack, for standing up to the Old Man, righteous!

This reminded me of my younger mother days. I would have to bring my sick child to work with me. She would lay on a makeshift bed behind my desk while I worked hoping the boss would let me go home early. She was so behaved I would never told to leave.
Times sure have changed.

Off to work now.
Lisa

I have to say that the picture of the car at the beginning of your post is just like the first car I owned, only a different color. I loved that car! There truly are a lot of wonderful working single mom's out there and they do deserved some appreciation for all they do. Glad you and the old man came to an agreement on the rules. What's good for one should be good for all.