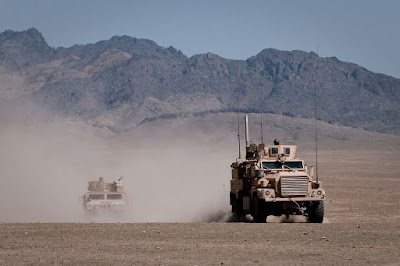 But for today:
We had a family cookout. It was scheduled on Friday, about the last minute at Jack Jr’s suggestion.  We had a great time 9 adults and 2 young’uns. Both our sons were there. Mark arrived in from Florida an hour before we started.
We had a great time Maverick will be 2 in October and Rosemary will be 2 in December. The two cousins  played well together. 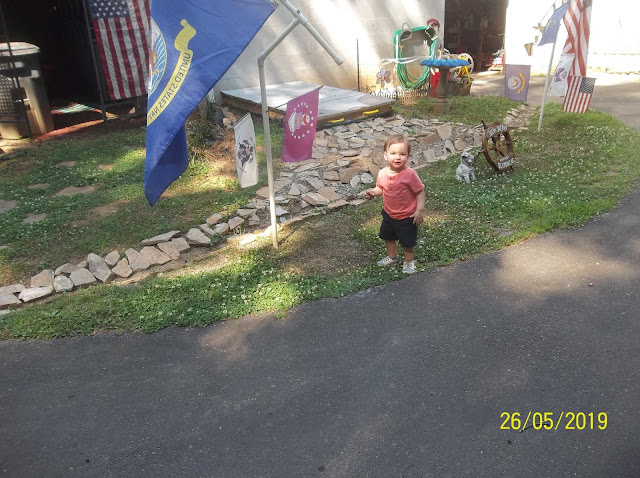 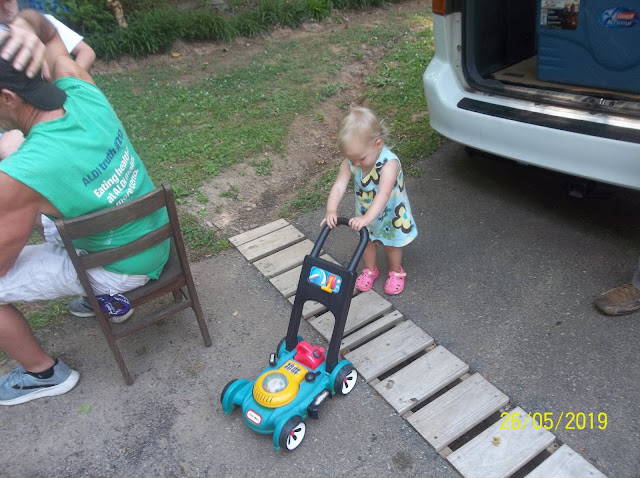 After we ate, I talked the group about mine and Sherry’s lives up to 6 years old, living during a World War. It wasn’t a long talk, just telling them in America you couldn’t  buy shoes, sugar, coffee, gasoline without a ration stamp.

I reminded them of the 2-3 wars of their life time, but try to imagine a time when 98% of families has someone off to war. Brothers/sisters/uncles/cousins, Sherry and I had brothers off to war. Of all the family off to war in Europe and the Pacific they all returned, some wounded. The only one not returning was Gaitie Helms Jr. a brother of my brother in law Sonny. He was lost on a ship that was sunk in the Pacific.

Today is set aside to honor those who gave their lives following orders in  ALL conflicts of this country. Looking in from outside government, we can categorize some wars being unnecessary for our freedom, the soldier cannot. He has agreed and sworn to follow orders of his Commander-in-Chief.

I mentioned in a comment on another blog, concerning the deaths of my shipmates and soldiers in arms who died following orders, as they had sworn to do. Many military men know the poem ‘The Charge of The Light Brigade.’ In it are the words: Theirs not to make reply, theirs but to do and die. Into the valley of death, into the jaws of hell, rode the six hundred.

Today, is to honor those who paid the ultimate, I cannot express loudly enough my admiration for the sacrifice they made to keep this country free and to honor their word and commitment. God is the judge of all, He is fair and just. God bless the memories of my comrades and God Bless America

Nite Shipslog
PS: I have read some YOUR touching tributes today, Thanks to you all who honor the memories of the fallen. 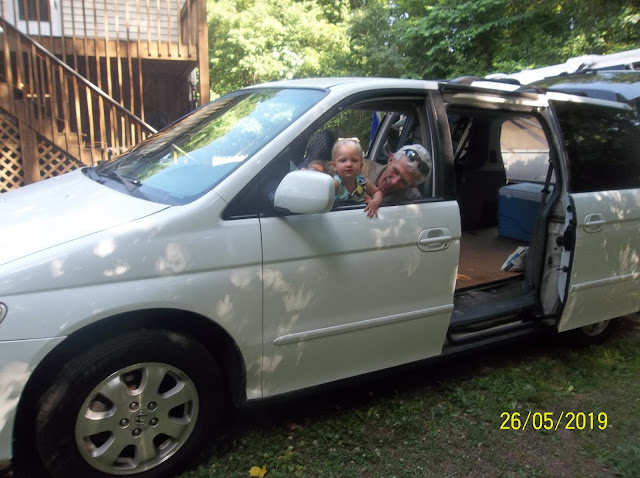 Grandpa Jack and Rosemary to the van to play 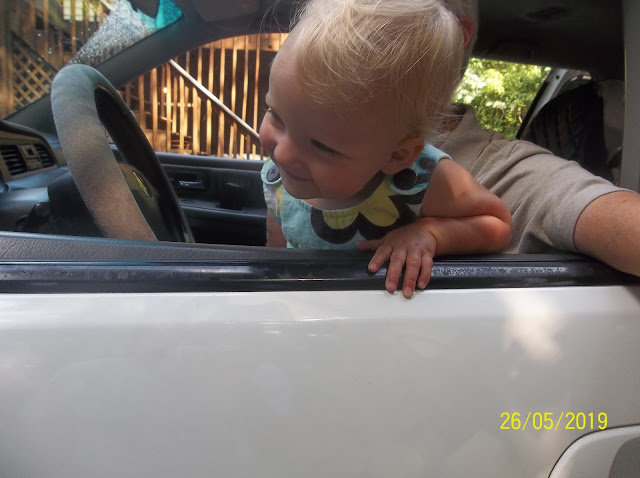 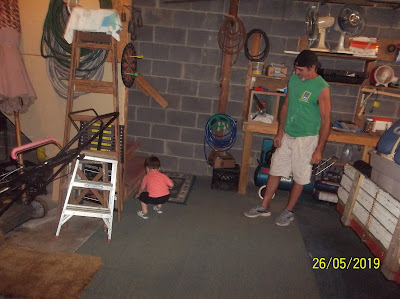 Grandpa Mark and Maverick in my playhouse, he is into everything 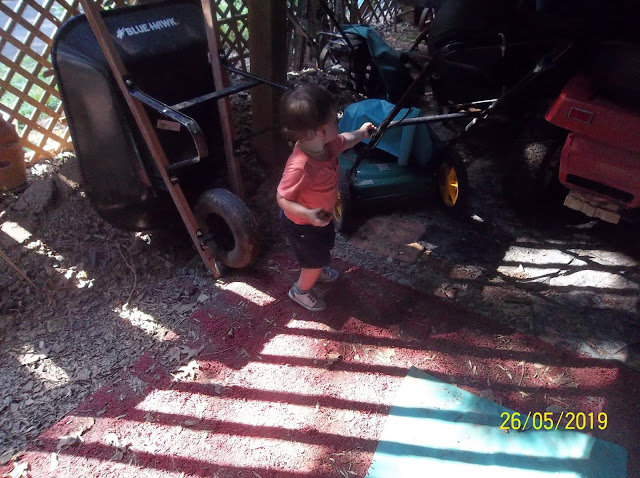 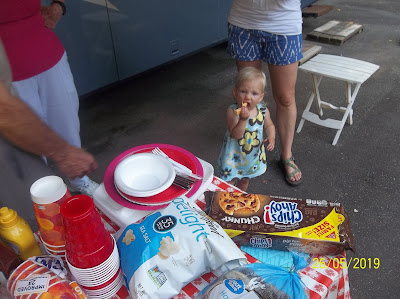 The above picture is not what I wanted. Rosie had taken the pound of cheese and was chewing on the whole pack, Grandma unwrapped one slice for her! 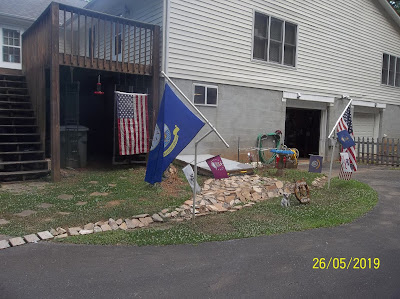 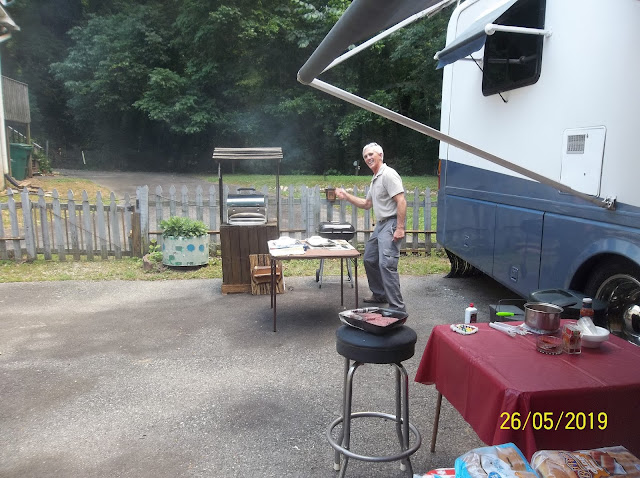 Son Jack brought the meat and did the cooking.

PS: I started the motor home yesterday and Sherry came out of the house wanting to know where we were going!
Posted by jack69 at 8:27 AM

Looked like a fun time! The little ones look so cute! So grateful for those who serve, or served liked you did Jack, and for those that gave their lives for our freedom. Prayed at church yesterday and thought about those who recently lost loved ones serving in our military thinking of their first Memorial Day without them and praying for God to comfort them dearly today.

What a wonderful opportunity to share with your sons and your grands. I recall my parents occasional references to the Great Depression, ration stamps, etc. But it never 'sunk in' until after they'd passed and I was going through those souvenir stamp books, etc.

Not sure if y'all were able to watch PBS' Memorial Day concert from D.C. last evening; I think they're replaying it today. All the first-person testimonials -- from the few survivors of Omaha Beach to recent middle-east vets suffering from PTSD. A tear-jerker, for sure!

PS - Hard to believe Rosemary and Maverick are nearly two already! They're adorable!

Any day with two year-olds has to be fun. And sharing stories of experiences make for a good time.

Where are you headed now?

happy memorial day. thanks for the shoutout yesterday.

We also had a cookout with family today. Even the little one next door, just at that point of speaking clearly, said over and over, ' Happy Memaw-we-ol Day.' We have a few that gave their lives to help save our country and we are forever grateful. What a sacrifice that they honorably gave. Thank You Jack, for doing more than your part too. Loved seeing your great grandloves. They are adorable.
love n' hugs to you and Sherry from our rainy, chilly north today. Our week will warm quickly, so we hope. May our planted gardens grow!

Such a wonderful post and tribute. Thank you for your service. My Dad served in WWII and my brother is in Europe going where Dad served. My 2 older brothers served in Vietnam and thankfully both came home safe and sound. I love the name Maverick! So cool! We have a Jack too but not jr..Jack III! My hubby is Jr. Have a good week!

Sounds like you had a wonderful day with family. I honor the fallen and it brings tears to my eyes when I think of the sacrifice they made, how young they were and the poor mommas that had to let them go.

I had to work on Memorial Day but was able to sneak out a couple hours early. Me and Nick ended up grilling out some hot dogs. It was just us. Everyone else was gone somewhere. Had we known you were having a shin dig, we would have came over. Hahaha.

Glad you had a great time with family for Memorial Day. And so good too to hear about your stories . It's hard for the young ones to realize that life was not always this good. Hard times happened and they need to know about them too. While we enjoy each day, we should always remember the people that made that possible and are still doing so today.