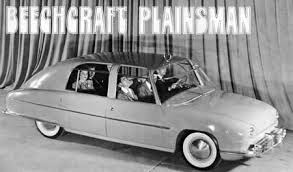 The Beechcraft Plainsman built in 1946

We visited a church in Lancaster. Sermon "Unsung Heroes of the Bible". I thought 'There are many unsung cars..'
SO Now…


Why does my mind wander to older automobiles???


I was thinking of cars I have known but now are ancient history. You know some, the Crosley, Austin, Studebaker, Packard and the Pontiac. That is why I was doing some online research. I have lost the knack of wording ‘searches’ (googles). BUT, I did run into the neat sucker that I have featured in the first photo. The Beechcraft Plainsman.


(Redirected from Beechcraft (automobile)
Jump to navigation Jump to search)


The Beechcraft Plainsman was a car made in 1946 by the Beech Aircraft Company in Witchita, Kansas. The Plainsman was fitted with an air cooled four cylinder Franklin engine driving a generator, which in turn powered four electric motors, one for each wheel. It was fitted with fully independent air suspension. It also had an aluminum body. It weighed 2,200 pounds (1,000 kg), its top speed was 160 miles per hour (260 km/h), and could carry six passengers. Only two were built.[1] 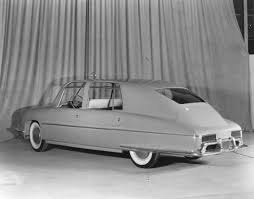 Talking about before its time: 4 wheel drive (gas powered electric), aluminum body, wrap windshield and independent air suspension.  AND 160mph? My ’48 Chevy would not come close. Anyway, I know why you, Dallas, Tuck, Buddy, Tom, Nick and I never did see one, because only 2 were built!  LOL

Up until the 60s the average gas mileage was from 8 to 21 mpg. I remember hearing that “Inventor xyz developed a carburetor that would get 65 miles per gallon, BUT GM and the oil companies bought him out and put the design in a secret safe because oil companies would lose money.” YEP ‘conspiracy theories’ have always existed.

Now I am wondering if GM or Ford didn’t secretly buy the Beechcraft design and shelve it.  LOL  Yep that is what musta happened! ;-)

PS: In my research I also met the FIRST ever patented motor vehicle , hopefully tomorrow, here.

PS2: Pastor did good on his sermon!

Yes, there are many unsung heroes. Not just in the Bible or in cars. We need to sing their praises!

As I was reading this I was wondering if you listened to the pastor so glad you made that clear at the end. Haha.

Interesting about that car! Glad it was a good sermon too! There are a lot of unsung heroes in the Bible for sure; but that's what God does. He uses ordinary people to do his extraordinary work!

Ha! I love how you turned unsung (Bible) heroes into the automotive industry!
That Beechcraft Plainsman was something else - reminds me of something they might have used as a prop in The Great Gatsby.

I'm going to have to ask Tom about these cars … just as soon as he wakes up from his pre-nap nap. :)

Wow, that Plainsman is gorgeous, couldn't believe 160 mph and I think there's a good possibility that the design got buried somewhere. Too bad, it was a very forward design.

love that car. too bad only two were built.