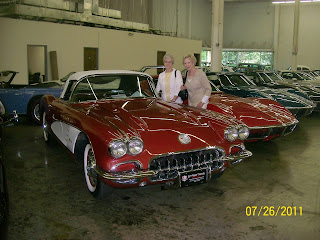 '55 Corvette If Shirl had it she would have driven it. If Sherry had it she might give it to me or sell it. (Used car sales in Charlotte, NC  2011)

Well one of the biggest days of the year just passed, but not without a couple hitches. Jack Jr. was exposed to the VIRUS and decided it best not to come down. Son Mark had to meet someone at the airport who had went to NYC for a visit. Found out she had to stay in Quarantine for a week before she could go into the city. Giving her only a week to visit vs. the 2 she planned.

So Sherry & I celebrated her BD and had a great day.

Mark came up the day after. I wish I had known and thought about the Chicken soup from the Lucky Dill on the west coast, Mark woulda brought me some.

Just after Mark left my nose started running like a creek. It actually did cause flags to go up in my mind. I voluntarily separated from my sweetheart for the night.

Yesterday I went down and bought a thermometer and some Alka Setzer Plus even though my nose no longer was running. Imma stay well, getting sick costs money. Just those two things were $20.(yeah imma cheapskate).

WE have at least 6 thermometers in the coach and back in NC. I got the only cheap thermometer there and it takes 3 minutes under you tongue.  I figured I had the time so I was just under 98 degrees.

I am not a fan of the battery powered ones. WE have 3 of those back home and the batt is dead in all of them. It is years between usage for us.

PS: I feel fine. Alka seltzer has been my go to for a long time for nose problems. I did take 3 of the pills and stopped. I don't like to take too much af anything.  I have had some quality time alone outside talking with Lucy. She did walk off last night before I was finished, independent cat!

I am wondering if I was allergic to something that hit me wrong??????

So happy to hear Sherry enjoyed a nice birthday ... AND you're feeling some better! Also! That JJ and Mark decided to err on the side of caution and not expose y'all. This virus is a sneaky ***** and from what I hear, doesn't play fair.
I think my younger granddaughter believes she's bullet-proof. Despite being a late bloomer (her dad's words), Chloe's become a social butterfly. Sigh. Best left to another day.

Allergens are in the wind here.

I hope you are feeling much better now. I am sorry Mark was exposed. Sorry about the quarantine with NYC. The world is a crazy place. Sandie

Well, I am gonna Guess you might be allergic to the Cats, When we got Tipper I had to go on a second Zyrtec, Nose ran like a faucet, eyes watered, ZYRTEC helped me, Hope everyone stays Healthy ! Sending down Love and Prayers ! Gary an Anna Mae

Sorry to hear Jack Jr was exposed to the virus; hoping he'll be fine! Good idea to buy the thermometer. Few months back hubby was having a mild sore throat so he just decided to start taking his temperature every few hours for a few days. It never went over 97.9. Both of us have runny noses sometimes; we blame it on the air quality and other allergens that might be kicking up. Just take care!

Jack's been sick this week with a stomach bug. Slowly getting better and I hope you are too! I'm glad your family members are being cautious. Have a good day tomorrow.

Sorry you are still suffering from whatever it is that you have. At least you found something that helps. Hope you continue to feel better and everyone in your family stays safe from this virus. It's scary how the numbers keep going up and up. Glad Sherry enjoyed her birthday anyway! Take good care and be safe!

Glad your feeling better!! It is allergy season.