NO I AIN'T THRILLED TODAY! I LOST! 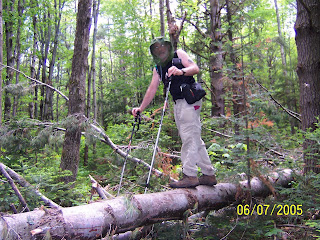 Crossing a log (ON the A.T.) that was dropped by the Beavers as they built a dam in Vermont. 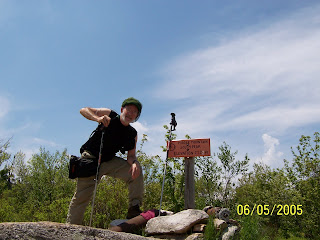 I believe this is the summit of Mt. Moosilauke in New Hampshire. Sherry did not feel well so I climbed this one alone. 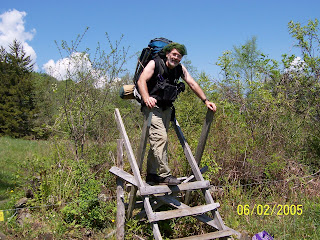 Many fences are crossed while walking the Appalchian Trail, this is one means of gettng across without damaging the farmers fence.
Now to today's entry, bah humbug! (LOL)

Okay how do you feel. Are you thrilled today? Well I am not! My team lost! How do you feel when your team loses? Hey do you jump up and down and say, wow they did a great job, beat us hands down? You know we deserved it! Nah, you get down in the mouth and say, if we had done this! Man if they had just done that differently we would have whipped them good.

We are all basically alike, we hate to lose it doesn’t matter if it is horse shoes or the Super Bowl.. I have backed a winner and I have backed a losing team, it feels better to win. So if your guy won, BE HAPPY but DON'T EXPECT ME TO BE OVERJOYED! When folks lose it takes a little time to accept and understand it. It takes a few days to realize it is not going to change, YOU LOST, WE LOST!
But come on now, don’t expect the losing side to be thrilled that YOU WON! We ain’t thrilled. But give us a couple days, whether you like it or not, we are Americans. I have said it here and I will say it again. I am proud to be an American and I have been as long as I can remember. If it took winning to make you proud, at least I hope you are proud to be an American now. This has always been a great nation, even though there have been problems, it has been GREAT and still IS. I, like all veterans, have pledged to die for this country if necessary, that pledge and promise is irreversible, I am still obligated and do not mind.

McCain/Palin lost the election, the majority of this great country said they wanted Barack Obama for president. So he will be. I wish him the best, and I have said it here and I will repeat it, I just hope he is the best president we have ever had, because we need it.

Funny thing about the two party system. Just as soon as the minority party becomes the majority they say everyone should cooperate, what is the word? Be bi-partisan. BUT when their guy was not in, think they would cooperate? Heck no. We can’t let you have credit for that. WE will wait until we can claim credit for it. Now DON'T JUMP ON ME, I AM NOT TALKING ABOUT RIGHT NOW, I AM TALKING ABOUT EVERYTIME POWER CHANGES! It has been a fact.

Now I would like for the congress to cooperate and do what is best for the nation. Mark my word, the Rich are NOT going to be over taxed, except on paper. The IRS may say they are taxed 70%., but if you could read the wealthy man’s tax return you will find they will end up paying from 10% to 30% (after taking advantage of all the loop holes and deductions), GET REAL, are the men and women who are mostly wealthy millionaires going to VOTE A BIG TAX on themselves without a way out! HUH UH!
Anyway, thanks for reading this CR_P, and good luck President Obama.

oh so sad . micheal crighton died of cancer on tuesday! i just heard it on the news. you know he wrote jurassic park and so many other books.

Yes I too hope Mr. Obamha will make a good president. I like the pictures and especially the ladder over the fence. I know where there is one of those at a roadside park. Guess it goes to a country bathroom.

While I am sorry McCain didn't win, I did enjoy seeing the joy on all the african American faces. Hope we will see a new and wiser Sarah Palin in 4 years! I am very concerned what Obama will do to the military. Lindie

my guy won..... I am happy!!!! there were times in the last 8 years I couldn't stand the president, Maybe now I can be a proud american again
Sandra

my choice was not Mr. Obama, but he'll get my support and my prayers; it will be an interesting four years

It will be interesting to see how many of his
promising he will keep. Not just Obama but when people are running for office they promise us everything. We will see. He will be the President.

It will be interesting just how many promises
he will keep. Not just Obama when people
run for office they promise every thing. Should be interesting. He will the the next
President.