Sometimes we do not WANT TO BE Thankful 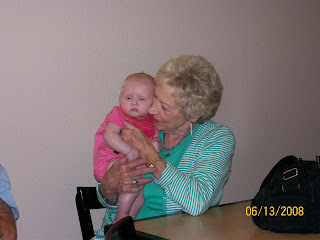 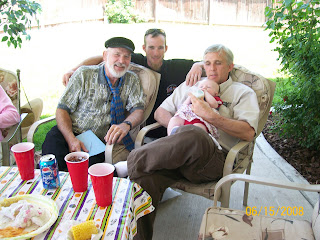 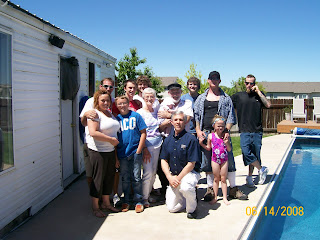 Our family together in Utah. A wonderful time, I will always be thankful for. 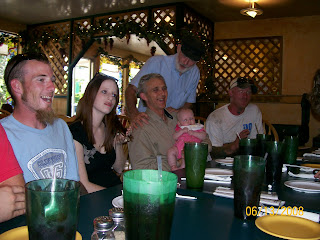 More of the folks in Utah. Ben, Ashley (Elsie Mae's mother, Jack, Elsie, Me and Corey.


Thankful, you bet! We have so much to be thankful for.

If you cannot find something to be thankful for, you really DO have a problem and I SYMPATHIZE with you. To be honest there is probably very little that can be done for you in your present state. I hope one day you have a lot to be thankful for.

I remember when my dad passed away, I heard so many folks say, he is much happier now and so much better off. You know what, I didn’t care, I wanted him back. I wasn’t thankful for the time I had with him, I was thinking of the present, and he was gone. The rock that I had leaned on, the stable force of common sense that was always there, was lying in a casket. I saw my brothers and sisters hurt, my mother was devastated. Thankful? NO! Not at that time. There have been other times I was not thankful. I was wrong, but I was not thankful.

Not everyone is like Job, from the Old Testament. You have to admire that guy and I do. But I am sure he was special, he stood head and shoulders above the rest of us, he was a special man.

The majority of us are not that special or strong. There are times that we are not thankful. I was reading a novel once where a lady’s son had been kidnapped, mistreated terribly and killed. The mother was confessing to her priest, that she had sinned terribly. She had railed against God. His answer was “Go your way, God has large shoulders he can take it, and always remember, you are still in his arms.”
I realize that was a fiction writer, but I think the writer was on the right track.
There are times when even in America it is hard to be thankful. When you find your teen age daughter is pregnant, when you find your child is deep into drugs. I can’t even imagine losing a mate. Yes the list can go on and on. Folks can point out the things you have to be thankful for, but somehow there are times that they do not count.

So I hope you are as thankful as I am and are a blessed. If not one day you will be, hang in there.

Thanks for coming this way, I am thankful for that…

Three men were sitting together bragging about how they had given their new wives duties.

The first man had married a Woman from Wyoming and had told her that she was going to do dishes and house cleaning. It took a couple days, but on the third day he came home to a clean house and dishes washed and put away.

The second man had married a woman from Colorado . He had given his wife orders that she was to do all the cleaning, dishes, and the cooking. The first day he didn't see any results, but the next day he saw it was better. By the third day, he saw his house was clean, the dishes were done, and there was a huge dinner on the table.

The third man had married a girl from Kentucky. He told her that her duties were to keep the house cleaned, dishes washed, lawn mowed, laundry washed and hot meals on the table for every meal. He said the first day he didn't see anything, and the second day he didn't see anything, but by the third day some of the swelling had gone down and he could see a little out of his left eye, enough to fix himself a bite to eat and load the dishwasher.

The other guys were Thankful!
Posted by jack69 at 1:06 PM

I am thankful for family..They are always there
and ready to help what ever the circumstances
We have a good family Thank the LORD. We have
a warm place to live, food, cars and people who
care. I am lucky to have Jack and Sherry and for them I am very THANKFUL

Jack I am thankful I'm not sure about earlier, but I am now. Have a nice day. Jean

I am Thankful for many things...

Happy Thanksgiving to you and Sherry!!

P.S.
I finished reading your book over the weekend...loved it...could you send me an email with the information I need to write a review...thanks!

Great entry and so much truth in what you say. I sure am glad God has some big shoulders.
Happy Thanksgiving to you, Sherry, and your family!
Those Kentucky men learn pretty quick who's the boss, lol. Thanks for the laugh!
Hugs
Debbie

Happy Thanksgiving to you and Sherry Jack!

o.k. I wanna be the third wife!
jack, Jack, what are we gonna do with you?
i shake my head in wonder and thank God for your wisdom and wit, such a blessing to my life and to so many. God bless you and keep you in His care but please dear God let us hold on to this angels with his halo on sideways for many, many many years!