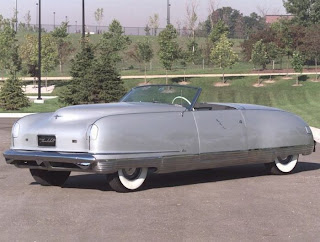 Can you believe, this is a 1941 Chrysler Thunderbolt. I love exotic American cars.

A few years after we were married, we met a stranger who was new to our small town. From the beginning, I was fascinated with this enchanting newcomer and soon invited him to live with our family. The stranger was quickly accepted and was around from then on. As the family grew I only once questioned his place in my family.

I asked him to leave once.

Later we seemed to miss him and I invited him back. My parents had been complementary instructors: Mom taught me good from evil, and Dad taught me to obey. But the stranger..Well, he was THE storyteller. He would keep us spellbound for hours on end with adventures, mysteries and comedies. If I wanted to know anything about politics, history or science, he always knew the answers about the past, understood the present and even seemed able to predict the future! He took my family to our first major league ball game. He made me laugh, and he made me cry. The stranger never stopped talking, but we didn't seem to mind.

Sometimes, Sherry would get up quietly while the rest of us were shushing each other to listen to what he had to say, and she would go to the kitchen for peace and quiet. (I wonder now if she ever prayed for the stranger to leave.)

I ruled our household with certain moral convictions, but the stranger never felt obligated to honor them. Profanity, for example, was not allowed in our home... Not from us, our friends or any visitors. Our longtime visitor, however, got away with four-letter words that burned my ears and made me squirm and my Sherry blush. We didn't permit the liberal use of alcohol. But the stranger encouraged us to try it on a regular basis. He made cigarettes look cool, cigars manly and pipes distinguished. He talked freely (much too freely!) about sex. His comments were sometimes blatant, sometimes suggestive, and generally embarrassing.

I now know that my early concepts about relationships were influenced strongly by the stranger. Time after time, he opposed the values of my parents, and mine. Yet he was seldom rebuked... And NEVER was asked to leave again. More than fifty years have passed since the stranger moved in with our family. He has blended right in and is not nearly as fascinating as he was at first. Still, if you could walk into our motor home today, you would still find him sitting over in his corner, waiting for someone to listen to him talk and watch him draw his pictures.

I received a version of this from my good friend Jim Page, 'I modified this to fit our family, because it fits ours and most of the US families today.
Nite Shipslog
Posted by jack69 at 11:39 AM

Cool entry Jack, I kept wondering when you were going to get rid of that nasty talking stranger. Needless to say I was suprised at the end.

This was quite a great entry. That stranger was becoming extremely interesting.....the ending was great!

It was a good read.

I guessed who the stranger was before the end; very insightful thoughts about the stranger and his wife; too many of us allow them free reign in our lives

I was trying to figure who I knew that you would
stay in your home. At first I thought it was the little man who use to visit us but he didn't
have any bad habits. You doe doe head you know
how gullible I am. Then I got mad that you let
a person like this be in your home. Then I got
to the end. This is the second time I believed
you, how Sticky got his name and now this.
Brother you are to much.

You had me fooled. Lol. We have four of them in our home, but we don't have them in the bedrooms. The grandkids have to have one to play games on when they visit. Take care, jean

When will "Rags" be for sale? I'm likeing "Sticky" so much. Bet you never knew anyone to read so slow. lol

Had to come back and tell you how much I enjoyed Shirls comment. Good for her. She is still standing up for herself. lol My laugh for the day. lol