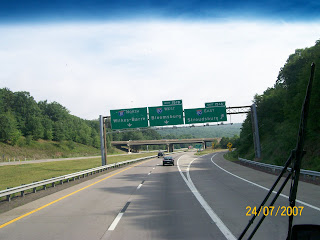 I think this is I-81 North in Pennsylvania. we will be headed that way soon I hope. 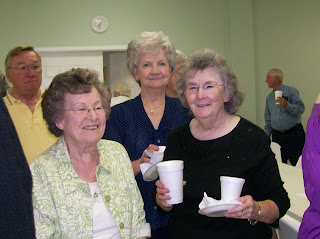 On the left front is Ann Brown who invited me to speak, a lady who said I was a mean kid when she knew me in Albemarle, I knew she was telling a story, and Sister Vhooris (because I cannot think of her first name. OUr church has folks with the first name of Sister and Brother. LOL 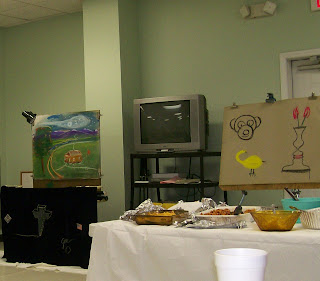 Sherry had the camera, but is tied up with the lights and doesn't have time to shoot pictures during a performance. Main picture on the left, trick pic's on the right. You would not have know if I hadn't told you, huh? The digital picked up the moon and stars, you cannot see then until the lights are off and the black light is on. Then the windows, doors and road light up with the moon and stars. I didn't know the digital would show them before they were supposed to be excited by black light..
Today's exciting information, not political.

The program went well last night. I did a poetry night. My first was the ‘World’s Best Poem’ by a Mr. Anon. Then the feature program was a drawing of “The House By the Side of The Road” by Sam Walter Foss. During the drawing I did something completely new to me and the audience, I played a CD of Vladimir Horowitz’s last piano concert, as I drew the picture.

I ended the program with “Home” by Edgar Guest. So the program would not be too serious at the ending I did the trick drawings I usually do at the beginning.

I drew a crooked neck squash, turned it into a Duck,
Then the famous two folks about to kiss, that become a flower vase. The last is a Monkey completely done with circles.

Sherry, of course, handled the lights and surprised a lot of folks by turning a day scene into a nite scene, complete with moon and stars. I always enjoy seeing the surprise on the audience’s faces when that happens under Black light.

Of course we sold a few books, had a great meal, all in all had a wonderful time.

I cut Shirl’s grass, our grass and the new neighbors grass. Like Debbie says, cut it when you can, never know when you will have another chance. (I only got stuck once Deb, but not bad.)

Shirl seems to stay in the yard looking for something to plant or move, or trying to feed some bird that flies by. LOL

Thanks for coming by the log.
Nite Shipslog
PS:
********I predict future happiness for Americans if they can prevent the government from wasting the labors of the people under the pretense of taking care of them. Thomas Jefferson

******My reading of history convinces me that most bad government results from too much government. Thomas Jefferson

You have to drag Shirl with you sometime and get a before and after picture. I hope it's not like a scene from 'the birds' at Shirl's house, with all that bird feeding...ha. Protect your ears when cutting grass...Sheila

You did a real good job. The jokes about me
were funny because everybody knew who you were
talking about. The girls name is Carolyn and
she said I was still as sweet and pretty as she
knew me in Albemarle and she was right about
you. You Tuck, Roger,and Charles Smith who lived behind us.

Your programs look and sound to be very interesting. I don't mind if you memorize one of my poems and use it. I think its great that Sherry can do the lighting for you.

I would love to see you perform (sp). It looks like you enjoy doing it but I know you really enjoy teasing Shirl. She can hold her own!!! As you saw, yesterday was a horrible day as far as the blog. Better today. From the heart today. Lucy