Our trip to town

The book, Gracefull Grasping for Dignity, with Sherry's help, has been the most important book we have published. When I started writing I only wanted to write fiction. But as they say Everyone writes fiction, even though I know that, it is still my genre, I love it.

GGfD is the most requested book we have out. We had a phone order for the book over the weekend (unusual, since most orders are through Person appearances, Amazon or the Blog.) The lady said her pastor had highly reccommended it for the situation they face. Sherry took the call and said she could tell the lady was very much on edge. Many folks have faced the same situation, a parent either you are responsible for in their home, or one who has moved in with you after the death of their mate. In today's world, more than in the past, This is ver stressful on the family.
Anyway we were up early to get it in the mail first thing. Stopped by Burger King after the mailing. would you believe only the manager was working, NO ONE else there, she was doing the whole thing cooking, the drive thru and walk up. We had to leave.
We stopped by WAlmart: 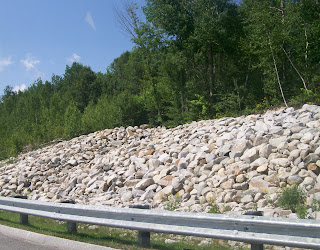 These rocks are some left over after making the trail in New Hampshire. HA! or it is the stock pile when the others get worn out. LOL The parking lot at Wal Mart is surrounded with these. I would not want to build here, I am sure these were taking from the lot as they started to build. 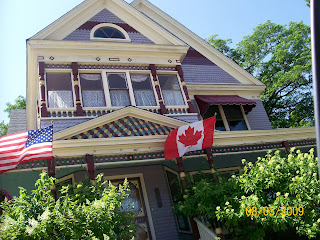 This house has interested me since being in Gorham. It is a Bed and Breakfast at the edge of town, beautifully painted. 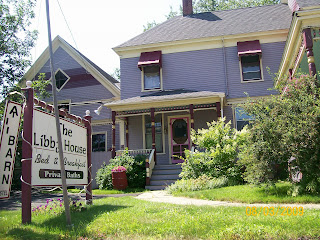 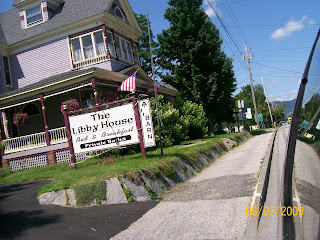 Looking back you see the AT sign and BArn on the right sof the sign. It is also a hostel for AT hikers. 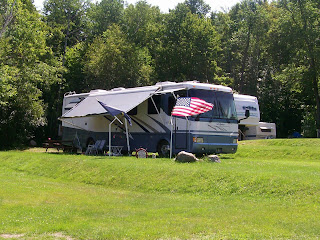 BAck home, you see most of our neighbors have left and the wind is high, the flags are stanging straight out.
I think I have fixed a leak in the back of the Odyssey. It has leaked since the day we bough it, but has gotten worse in the last year. I hope it is fixed.
Thanks for coming by the LOG.
Nite Shipslog
PS:
An old man goes to the Wizard to ask him if he can remove a curse he has been living with for the last 40 years. The Wizard says, 'Maybe, but you will have to tell me the exact words that were used to put the curse on you.' The old man says without hesitation, 'I now pronounce you man and wife..'
YOU know that is when the fight started.
-----------------------------------

Those white rocks look like the ones we pass on the way to church. John has pointed at them so many times and said river rocks that now we see who can say it first when we get in sight of them. Aren't we silly old people?

Love the pictures. I wish I had those rock
I would make real good use of them. I have about
8 big cantelopes in my front yard little bigger
than a grapefruit. They have taken over my
natural area Smoky said not to tell anybody but Sarah and Janet have seem them. So now Smoky said when they get ripe we are having a cantelope party cut them in half and put ice cream inside. Today it would serve 16 people. I sure there are some more out there
under their leaves. The cantelopes are now of
big interest and being watch close. HEE HEE
I am taking pictures. When you get home you
can put them on your blog. I don't know how.

This curse of mine lasts now already six and a half years...sigh...still above 75F outside, crickets are yelling, missing rain, just like me.
What lovely houses you (we) are able to see. Thank you for sharing.Years since I last had a meal at BurgerKing...miss that as well...wait and see what tomorrow may bring.
Please have a safe road ahead of you.

The house reminds me of a couple we saw in Eureka Springs, Arkansas. Gives them a lot of character. I hope Sherry didn't hurt you to bad when she read your joke...ha. Take care, Sheila

I like your pictures. You have snapped some unusual houses and pictures on this spin, hike or whatever. Shirl said our Spunky's poop does not stink cause he was a sweet dog. OK, alright already we will pick it up!!!