Politics and the Trail, our first Hungarian.

I hear Betsy might have to add another star to the flag. Puerto Rico may join us. Then I hear we may want to subtract two! Folks in Hawaii want to secede and some in Alaska. I even heard Texas wants to become a country again. Of course there are always some folks in each state who would like to secede. There are times when I would like to move to a state that would secede. I like the idea of a state having rights to govern it's folks independantly from the Federal Government. Please, name one project that the Federal government runs effeciently. Just from past history, I personally am acquainted with of piles of waste in Government. You like 'Cash for Clunkers?' Great deal. It is estimated that each clunker costs the government $20 thousand dollars. Don't get me wrong again, if you want to take advantage of a government program, by all means go ahead, and I certainly won't blame you. But if your clunker is running like ours is, it will keep on doing so, because we do not have a monthly payment. AND I certainly do not want one. We have always liked to own our cars, We have always driven a used car, or did until our 60's. I cannot see how putting more people in debt for new cars can help our country. Just my views. Can you tell we are not hiking today. hahahahahaha! 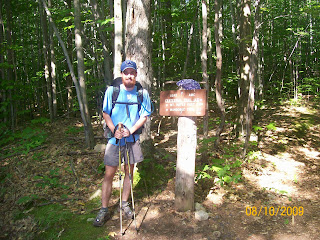 We spent part of our morning deciding NOT to hike today, give the feet a rest. So on the way back to the motor home we saw 'Whisp'. That is him above He was in town headed back to the Trail, so we gave him a ride back. 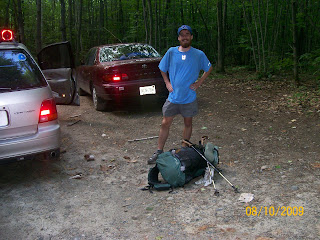 Whisp, just out of the Van. with that heavy pack on the ground. Oh yes and Whisp is our first Texan this year. He is From Houston. 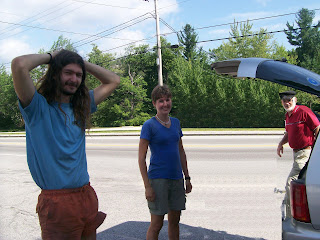 Here is a couple. The guy on the left is 'Zoltan'. WE spotted him after we dropped off Whisp. WE turned around, went back down the road to see if he wanted a ride. Yep, he was going to WalMart to resupply. Now if you are going North, Gorham is the last town hikers will find a Walmart. To Wal Mart. We started to leave and Zoltan recognized 'RAbbit', that is the young lady. He said he didnot want to lean on our good nature, but could we give her a ride. Sure. Old Zoltan is a nice guy, he is a Hungarian from Romania. This is our first time meeting a hiker from Romania. RAbbit wanted a ride down town, OK. He also recognized 'Monty', from New Jersey. Monty was sitting comfortable eating a giant deli sandwich from Walmart. WE piled him in also.
Monty was headed for the Post Office, Zoltan headed for the Library and RAbbit headed for a Big CVS just up the street. By the way, Rabbit is from Tampa, FL. Our good deeds for the day. 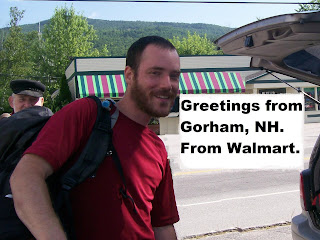 Here, Monty says good by. I asked if anyone wanted the pic's e-mailed any where, Monty wanted his sent. So we did it, and hope it got through.
We will lay around and play around this old house today. Catch up on writing. If I am to finish S'Gar for Christmas presents, I gotta get busy.
TAke care.
Nite Shipslog
PS: I thought of this joke when I read that a baby, declared dead, began crying in the casket. (true)
Three friends from the local congregation were asked, “When you're in your casket, and friends and congregation members are mourning over you, what would you like them to say?”
Artie said, “I would like them to say I was a wonderful husband, a fine spiritual leader and a great family man.”
Eugene commented, “I would like them to say I was a wonderful teacher and servant of God who made a huge difference in people's lives.”
Jack said, “I'd like them to say, 'Look, he's moving!'”

It's so nice to see happy people just enjoying the trails and each other! Great deed for the day! Hope you have happy feet soon! :-)

I hope Sherrys feet feel better soon. She is a real trouper. You do meet a lot of people on the trail and I bet you could write book after book when you settle down and quit roaming. Lucy

It was hard keeping up with Zoltan, Rabbit, and Monty, but I think I got it all straight; neat that you could help fellow hikers with transportation and e-mailing pictures

I am like you; I definitely don't want a car payment just to participate in the Cash for Clunkers deal. I also heard of rumors that at one time Montana was thining of seceding; if that happened, I'd be back up there in a heart beat :)

take care of yourselves, you two

Well, I'm one who just took advantage of the "Clunker" deal. My car was 11 years old and I knew probably a year or two from now I would need some super discount so I opted for now. Glad I did. It was a great financial help to me as I was driving a big gas guzzler too. I will also save money on gas with my new car.

Good morning,
not long ago heard that the average age of cars here in Athens is 12(!) years...
Am however glad to be able to walk to the playground, supermarket and much more.
Wish you happy feet and a nice start into the new week.

What cool people you are meeting that sounds like fun giving them a ride to where they
were going. Well you deserve a rest so enjoy.

I'm with you that's what I would want them to say, 'look she's moving'...ha. Enjoy your rest. Stick to the toes and feet...Sheila

I heard or read yesterday that the baby did die this time. Happy feet to you both.