When I am right (I will know it, Sherry will tell me) 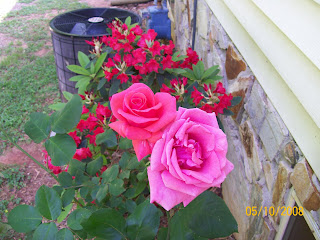 These were roses and Mt. laural (or Rhododendrums) from back in the spring in NC (Condo #2) 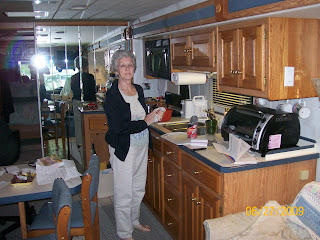 My girl and Breakfast at our house. Now off for a walk maybe.

When a fellow has too much time on his hands he gets into trouble. It is so disheartening to know folks cannot see the light and know, I am right, I have always been right (except when my girl points out I am wrong, then I possible could be wrong, you can miss some small points when you get older.).
Where we are from, in the Charlotte, NC area there was a drag strip, called the Shuffletown Drag Strip. This place was out in the sticks. Nothing for miles except open country. Kids went there to blow the ‘carbon’ out of their engines and have a little fun. It was ordered closed a few years ago.

The neighbors complained about the drag strip noise. It was no secret when they bought there, that it was noisy. But the County commissioners say that is progress. I don’t think you should be able to move into a neighborhood and change it to meet YOUR ideas, you move there you know the rules, you should live by them.
If you move near an airport, better expect some airplane noise. Move close to a Military Base, better expect to hear loud aircraft and some booms.
It is different if a government likes the noise. Now consider Charlotte Motor Speedway. Within 20 miles of where the old Shuffletown Dragstrip was shut down. This noisy place brings millions into the local economy. Neighbors got in involved fussing about the noise, the city/county Governments bought the people out and left the speedway. Seems to be about money not noise pollution. NO, please DON’T misunderstand I am not against NASCAR. What I think is, the city should have done nothing, not spend taxpayer’s money to shut someone’s mouth.
Blew it again today, huh? (And I actually deleted half of the entry) If you don’t want to comment on the entry, tell me how the weather is there! I’ll get the hint.

Nite Shipslog
PS:
Guy calls Delta Airlines from the bar and asks, 'Can you tell me how
long it'll take to fly from San Francisco to New York City ?'
The agent replies, 'Just a minute.'
‘That is great, then I have plenty of time, thanks” and hangs up.
Posted by jack69 at 9:46 AM

Vote me in, I agree with your opinion in this matter. I also think our city was wrong to let people build duplexs on a couple of vacant lots in our housing addition. Guess thats what we get for not buying where there were restrictions.

Jack are you taking lessons from me on how to get in trouble?? I love the flowers and don't know enough about the city rules and regulations that you speak of , or am I a coward ? Yep I think I will play this safe.. Have a good day, both of you.

LOL Jack! I totally agree with you! I remember a neighbour in Montreal complaining constantly about the traffic, the 3 a.m. drunken McGill students and the airplanes to boot! Sure, that bugged me too, but I chose to live in a highrise smack dab in the middle of a busy party-city! Oh, it's humid here btw.
;-)

I live a half a block away from a firehouse...sirens day and night....you know after a while you don't hear em anymore...lol

Jack you are right Suffletown was in the boondocks Said to much noise. Land sold and people moved in. Now we have the drag strip close to Motor Speedway and now it is OK because it will bring money for Concord. It is close to a neighbor and their will be noise. These are real dragsters. They are loud. Our small drag strip followed all the rules and kept boys off the street. The new drag strip is one for real loud dragsters. You may not remember I draged raced in Valdese I won driving a 57 Century Buick against a 57 Chevy. I won three against a 57 Chevy. We had police and EMT on hand if anyone got hurt. It is
funny when money gets in the way how everything
is approved. This time you are right.

Good morning Jack,
being from a small village, where one could hear cows, moving to Athens was (maybe still is) quiet a shock, as cars,motorbikes and much other stuff passes by.
Some of it I don't hear anymore. Am glad however to hear a bird sing, hence keep my ears open, regardless of what noise comes in.
Agree with you about tax payers money spend, which they would take care of the roads, side walks over here with it.
Weather: sunny, no clouds, about 90F, same tomorrow, next day, day after - wish it would rain...

Had many good times at shuffletown. THAT track was built in the 50's by the police dept. with taxpayers money to get racing off the streets and did very well. Now you have the Bruton smith drag strip in Concord which is very expensive to be competative.What I'm getting at is the little man's say does'nt count anymore unless we stand together and I'm willing. That track was'nt hurting a damn sole.