The last time I saw Cousin Henry, was in GITMO.  He was a Marine stationed out at Camp Buckley (Presently housing the Terrorist prison so much in the news) and I was a sailor at the Supply Depot. That was 41 years ago. I met his son at a funeral a year ago. Then I was told that Henry lived in California. 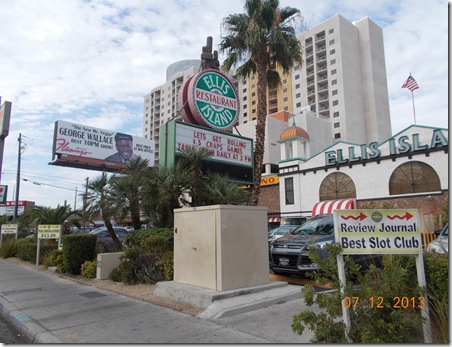 So now both brothers, Dewey and Henry have moved from California to Las Vegas. Friday night we had dinner with them at Ellis Island. Henry brought his wife Goldie. I had never met his wife and in fact did not know he was married. NO one told me she had lost her sight two years ago and is still trying to deal with that, so she needs a lot of help getting around. 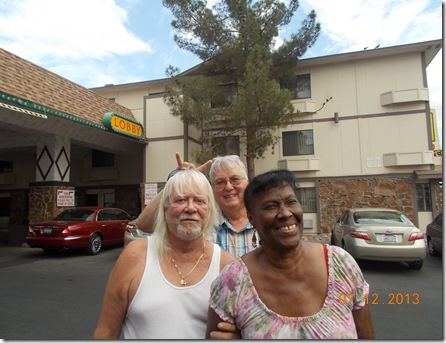 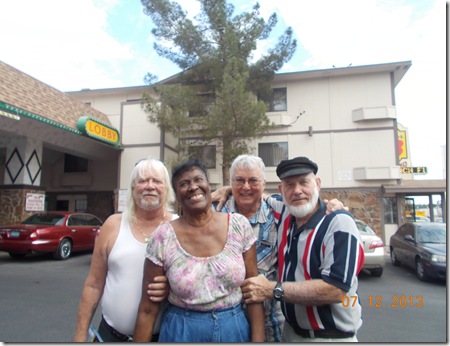 Henry wanted one of my books, he also insisted we get in a position with some Vegas in the back ground. 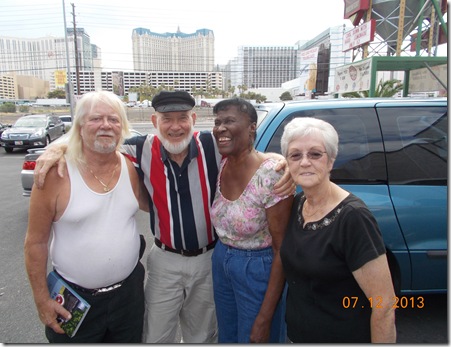 We had a good meal, Ellis Island is known for its ribs. So everyone had ribs. Sherry had the combo ribs and chicken. It was all good and very reasonable compared to other places.

I really did not know what to expect with Henry. He has lived a pretty rough, foot loose and fancy free, redneck life. I was impressed how he dotted over Goldie to assist when she needed it.

Goldie herself, was a beaming happy lady. She and I could converse pretty  well. She said, “They say I speak too loud to compensate for my sight.” I was happy about that, I could understand her pretty well. We were able to joke about our handicaps, she is very sweet.

Sherry hasn’t been feeling on top of the world since being here, but she seems to be climbing out of the hole. (I also had a little spell with my stomach) She said today she just felt ‘washed out’. Tonight she seems to be a little more ‘here’.  She sure looks good!

Did I tell y’all? I took my $5 into the Casino. (I only play the slot machines.)  I looked all around and I could not see a machine I understood. All were gaming machines. Poker, Fishing(?), picture games, star wars,symbols, space ships etc. Plus they like to work off Credit Cards. I NEVER figured out where the REAL slots were, so I still have my $5. 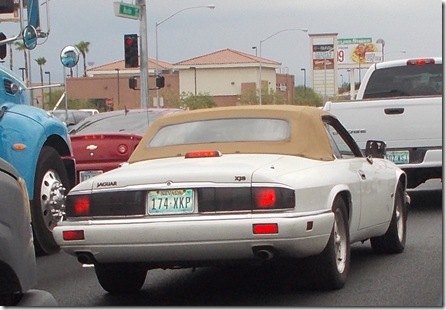 This is an older Jaguar on the streets of Sin City. 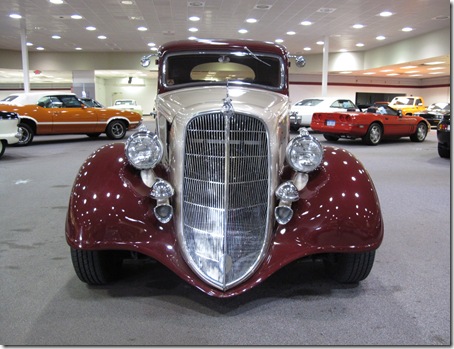 Wow, it looks like you had a great reunion, 41 YEARS, lot of things to catch up on! Goldie is to be admired, that beautiful smile ~ maybe she's thinking Henry is going to read your books to her!!! Hope Sherry is 100% real soon, love and hugs to y'all.

Gosh, but I love these smiles ... especially Goldie. (Isn't that a great name for someone with a happy disposition?!)
Sounds like a good time was had by all.

Hope Sherry gets to feeling better real soon! It's easy to become dehydrated out here ... it sneaks up on you. Hold her close! (Ya, as if you needed reminding - lol!)

Glad you had a heartful wonderful reunion.

Looks like you were all having fun and that's a good thing. Hope Sherry is feeling up to par soon and you too. Maybe you two need to take a day off and just rest all day.

The reunion with your friend and his wife sounds like it was a wonderful one for all of you. Goldie's smile is infectious, for sure.
I smiled when I read the portion about her talking too loud...but that was OK with you! Big smile from me.
I'm so sorry that Sherry hasn't been feeling well. I'm glad she's better, and I pray that she feels 100% by the time she reads this. Aren't you a sweetheart telling her that she looks good. That'll make a girl feel better immediately. You ARE the doctor. :)
Hugs to you both as you continue to enjoy your travels. P.S. Glad that you still have the $5 in your pocket. In Vegas, that's the best place for it.
Smiles to you and Sherry,
Jackie

Glad to see everybody Goldie looks
like she has a sweet disposition.
I know you travel lots but you guys have been moving no time to
rest. Hope Sherry is soon back
up to par. Better come on back
to the small town and rest..

Okay you have the most interesting life. And I love your family - very interesting. And I love that someone can take an adversity and still be happy - that has to be hard.
I hope Sherry feels better soon.
sandie

Glad you had a great time with your cousins. I'd never heard of the Ellis Island Casino before. I hope you are both feeling better. It could be the heat there getting you all down. Take good care!

She always looks good but I am glad she seems to be on the mend.

I'll bet your friend could write an interesting book himself.

I wrote friend instead of cousin, but, still with the book ;o...