(Still with the family here in Utah, more on our visit later)

We common folk cannot understand how a popular, well known, politician, respected, wealthy or sports person can be stupid, and ruin what we see as ‘THE LIFE’. We generally say “He or She had it made!” I have run out of fingers to count politicians who blew a career being stupid. “What? no one seems to know their ‘texts, tweets, letters live FOREVER!”  A hi-profile preacher doesn’t know you cannot hide an affair, even though he preaches, “be sure your sins will find you out!”

Even in my extended family, I have heard a father say, “The boy had it made, everything going for him, and throw it all away for a few minutes of pleasure!”

Even in our lives as the common person, most of us have someone who has blown their lives doing something stupid, but usually on a small scale. But for us to see someone like a sports star risking a 20-60 Million dollar contract by taking a chance, if baffles our mind. IF Aaron H. is found guilty, he will see that multi million dollar contract in his mind for the rest of his days in prison and kick himself, but it is too late.

You have OJ, Jim Bakker, Jimmy Swaggart, several governors and mayors of Illinois, John Edwards of NC fame, and not least, there was Teddy Kennedy who was destined to be president who couldn’t keep his zipper zipped. That just touches the surface, there seems to be no end to high profile stupidity.

So methinks that no matter your level of popularity in this world, we are all subject to thinking, ‘that cannot happen to me’, but it can. It comes from the mind not developing past the childlike belief that ‘I am different’, when all the time we are no different than our peers who think the same. Thankfully some minds learn that we all must be careful,  we can get hurt, we are not infallible.

Will Rogers said once, ‘some folk can take warning, but others have to pee on an electric fence to LEARN!’

Most folk who win the lottery go on to live the good life, thankful for their luck. A few, the ones that make the news, blow their winnings and end up broke and owing taxes on what they bought.

We have worked for what we have, and most likely, you have too. I refuse to take a chance I can avoid, life is good and I plan to enjoy it. If you work for it, you know its value. Maybe that is the problem, politicians, some preachers, sports figures and lottery winners are not spending money they earned, and don’t recognize the true value or the blessings of having it.

Life can be tough at best, why make it tougher by being stupid. Ignorance I can understand, but stupidity? Huh uh! 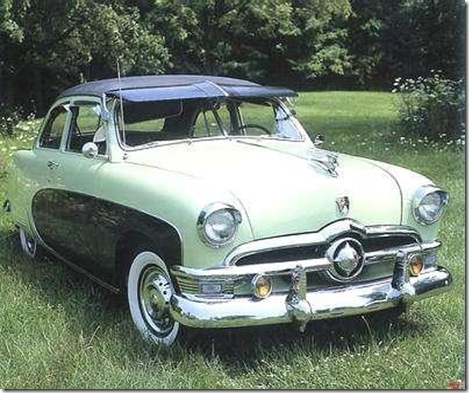 My brother Odis, had one of these 1950 Ford Crestliner.  Methinks they stole the bullet nose from the Stude!

I used to work with someone whose twin brother was a "genius" who worked assembly line because he had impulse issues & also because he thought he knew better than anyone else in the world about everything. That will get you $10 an hour or fired. I've met plenty of people like that, actually.

And my mom used to tell me that morality & a high IQ had absolutely nothing to do with each other. That is very true also. ~Mary

Well said , Jack..
You are a gentleman who has been raised right. Wish this country was filled with more people like you.
Hugs,
J.

A man from John's hometown won the lottery a few years ago. A man who had nothing before. He couldn't handle it so he took has own life.

Still chuckling over the Will Rodgers quote. The man had a way with words to get the point across.

Sometimes the rich and famous get it in their head they are above all others - and then find out they are not. sandie

hee hee...
No one wants to admit it, but that "spinner" on the front of both the Fords and the Studebakers in the early '50s was inspired by the Tucker.

I can't believe I clicked on the e-mail and got to your blog. You are right people can throw away their career over their desires. Tried to clean up what I was saying.

I wonder if this will go back to
my blog. Will let you know.

Money and fame cannot buy happiness for sure. It's sad when you hear about the things people do. It does make you wonder why. I'm thankful that I have neither. It's the simpler things in life that count. Hope you all have a wonderful Sunday!

I said the same thing over and over, about affairs and thinking they can drive drunk and still get their huge salaries. You would think ,as you said they would know they will be caught.