Before the flight, Stella waiting to board for her first flight! 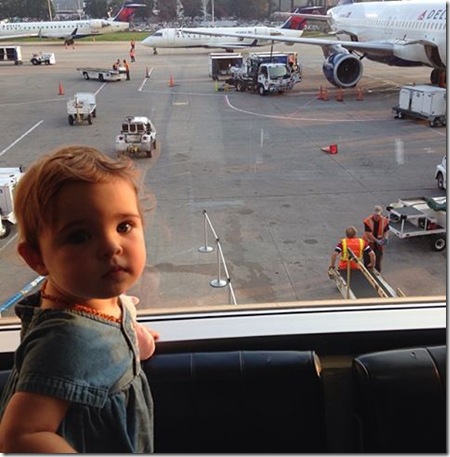 (Taken from her mama’s facebook this morning in NC)

A time that has been planned for a long time is finally coming to fruition. Flight #521 landed in Salt Lake City bringing eleven family members and friends from North Carolina. Jack Jr. whose former wife Carol, and two sons live here.  We a still enjoy a good relationship with them.

Also Carol’s mom and dad live here, we very much enjoy their company.

Flying the family out here is a way to give the guys and gals a break and a very short 3 day vacation in some beautiful country.

The main thing is for jack Jr to see the boys and for his sons, Stephen and Josh from NC to get to see and talk to Ben his son here.  Corey the other loved son, will be unavailable, which is sad.

The unique thing about the land scape here is the mountains (as compared to our beautiful mountains back East.) Back east you have small hills, larger hills, small mountains and then big mountains.  Here you have flat land then all of a sudden the Wasatch Mountains rise to nearly 12,000 ft. 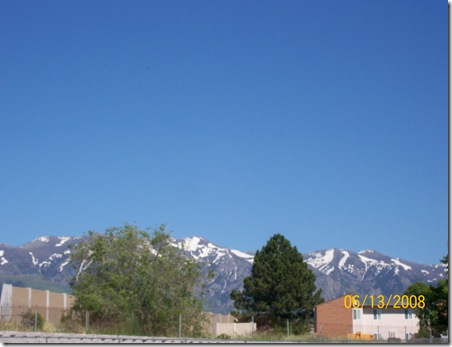 I took this Jun of 2008 with the snow still on the Wasatch.

That is pretty impressive since Mt. Mitchell the highest Mt in NC is 6,684 ft.  And it is hard to see the real height because of the foot hills. 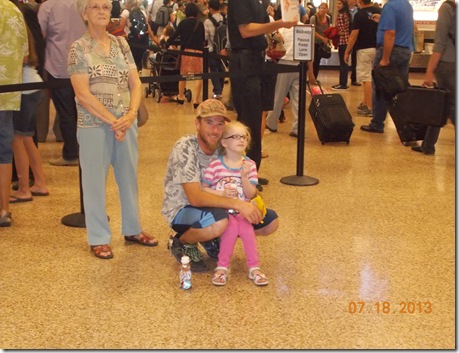 Sherry Ben and Elsie waiting for the family to deplane. Carol has gone looking for them. 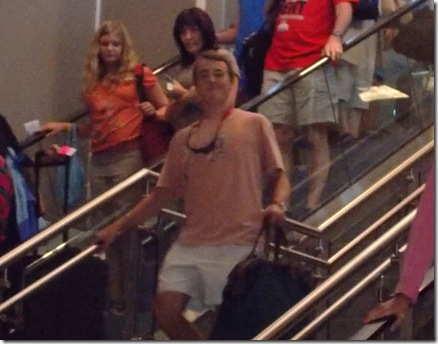 The first I see is our youngest Grandson who just graduated HS, LUKE VEGAS! 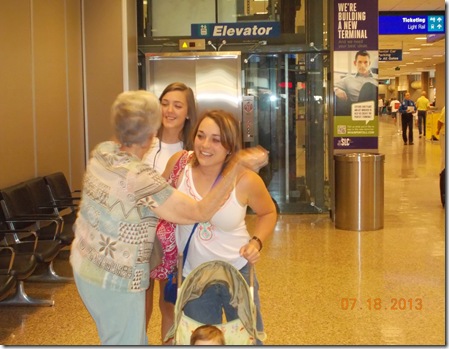 Then is Sherece pushing Stella followed by Keirsten. 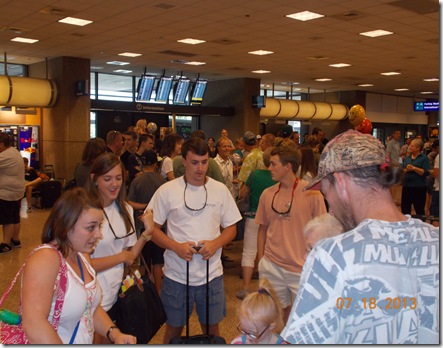 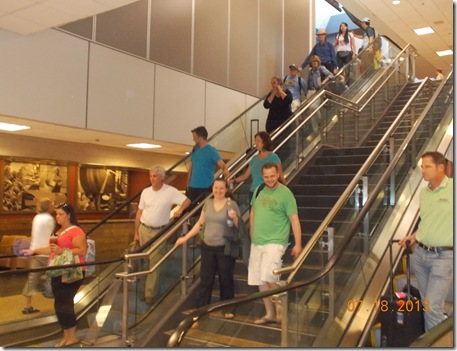 Then down the Escalator comes Jack followed by Josh. Jennifer and Stephen followed by Megan.

We are missing Mark. The only smoker in the crowd and it has been 4 hours, Gotta have that cigarette. Finally he comes down with Carol. 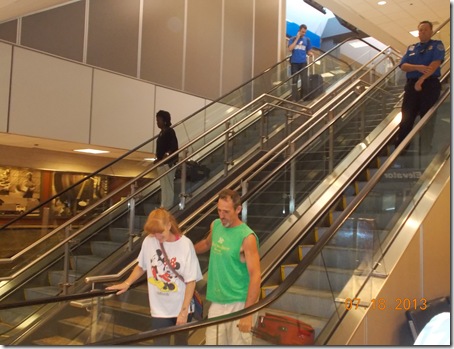 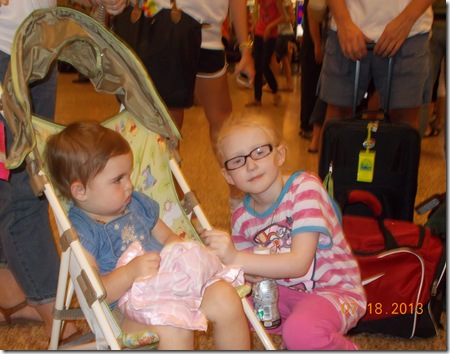 Father and son reunite. Ben on the left his dad jack on the right. 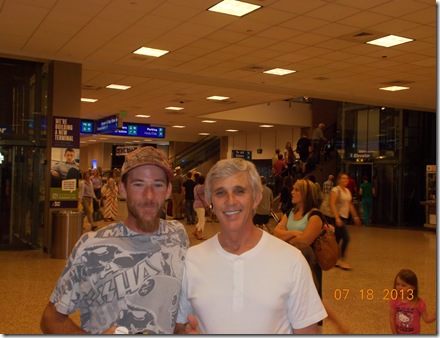 Ben was here for the landing then he had to go back to work but before that here is Three Generations. Grandpa in the center Son jack on the right and on the left his son Benjamin Aaron. 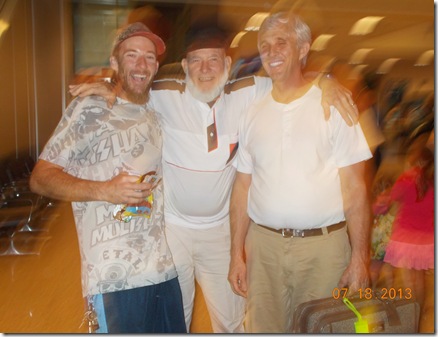 We finally got the vans and headed North to Layton. We stopped at Denny’s, they had not eaten yet today.

Then to the motel…

Later we will get together for Ben’s Birthday.

It was good to see the crew from NC. Better to see brothers and dad reunite. 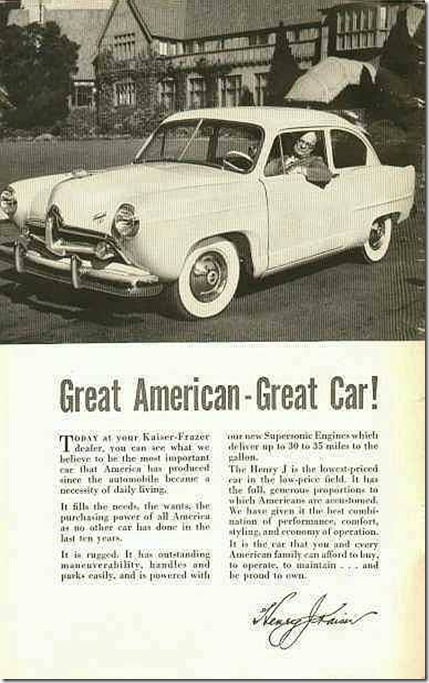 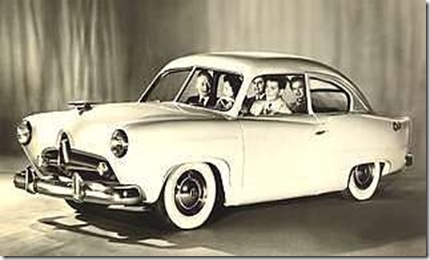 This was an intro by Kaiser Frazier, Probably the right car at the wrong time. 1951.

Good to see everybody. I thought
Luke Vegas was not going. The
year I went we had 11 I guess I am
the only one missing.

Everybody looks happy..little Stella first flight. Glad they
had a good flight. Stay cool and
safe.

Did you sister Shirl come? What a great way to have a family reunion. I hope you and Sherry have a great one. Sandie

Nice family you all have. Precious Memories. Enjoy the get together.

Nice family get-to-gether. Happy for u-all. My classmates came Monday and they were impressed with "Toby".

What a wonderful reunion. Glad you all got to enjoy.

What a delight-full share, Jack! (Can you read this smile?)

Love all the candid captures, but those baby girls are something special.

Thank you for sharing your sweet family with us this evening!

It looks to have been a most joyful reunion! This is great!

The Henry J helped sink Kaiser just as the Jet sank Hudson. Of the three independent manufacturers who introduced small cars in the early '50s, only Nash pulled it off successfully with the Rambler. The money Kaiser and Hudson spent developing and bringing their small cars to market would have been better spent developing the next generation of their main line large cars. In Kaiser's case, they couldn't develop a V8 in the age of the V8 and were left with an underpowered 6 built for them by Continental. (Not to be confused with Lincoln or Lincoln'd Continentals.)

It is so nice to see all the wonderful SMILES there. I'm glad so many could come to celebrate together. I know that it is hard to get everyone together at the same time. It's been several years since all of mine were together in one place. Enjoy your family and time spent together!

Adorable babies and so cute when they meet. Good looking family. Love all of the pictures.

What a wonderful reunion, everyone looks so happy. Enjoy your together time!!!