First, on the fourth, WE went to Judge Roy Bean’s place. You western fans might know him as “The Law West of The Pecos”.I will make another entry covering that.

My last appointment was delayed by a text message from the Dentist. ‘I have an Emergency could I see you an hour later.’

So an hour later we met with her she seemed subdued a little. Sherry said, “I know you are excited about your vacation on Padre Island next week.”

“No, that will not happen now, my father passed away last night, He lives 8hr drive into Mexico. My sister is flying in from Dallas and we will leave out. But first,” then her smile came back, “Let’s get this dental work done.” 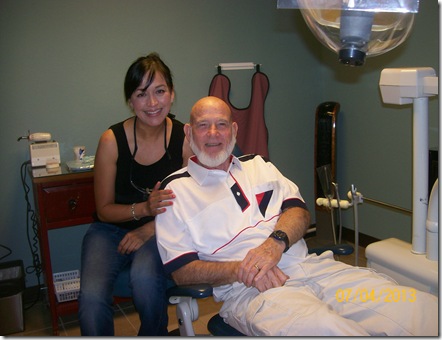 Me in the dental chair with my dentist.

The work got finished I am very happy. She took a personal check for the work. and we left. This time coming out of Mexico there was a big back up and we waited an hour in line.

Thisis what I-10 looked like once we reached it, I told Sherry I love driving out here: 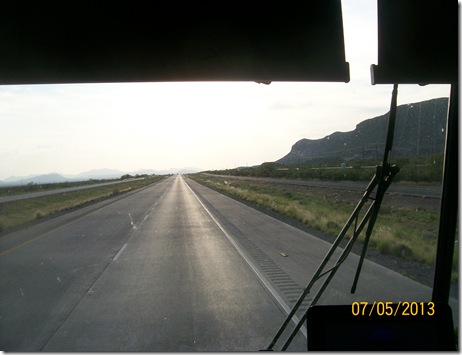 The trip was going great the land and territory looked like this: 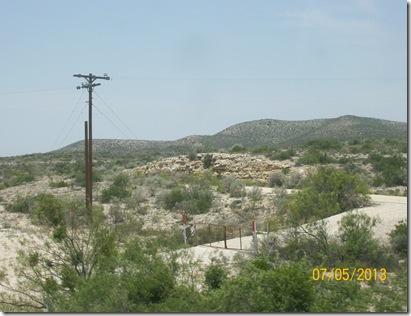 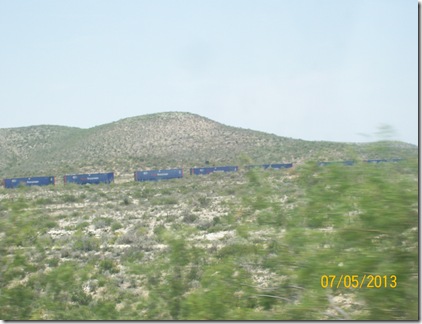 Have you ever thought that most places in the world you can never see an entire train at once? Well out west you can. The above is not a good example because the RR track was too close to the road. But when it is about a mile off the road you can see the engines at the front and the engines at the rear. 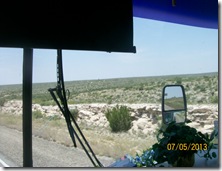 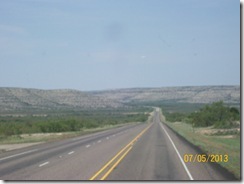 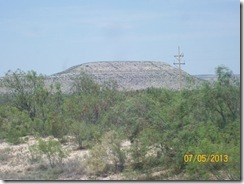 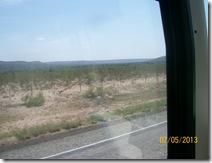 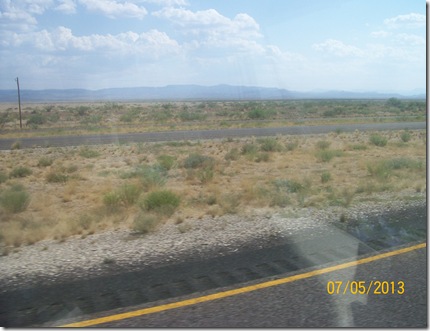 All of a sudden the traffic stopped. You know when you see two miles up the road and no end in sight of the jam, something bad has happened. It was an hour of so before we reached the wreck.

The first thing was saw was a Tractor and trailer facing us: 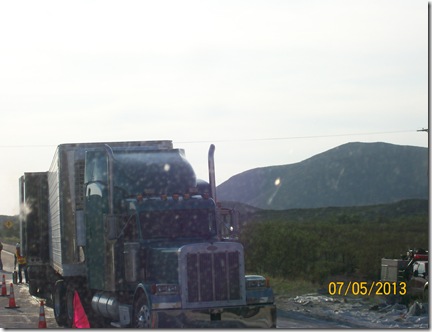 Another Tractor & Trailer just behind facint the other way. THEN: 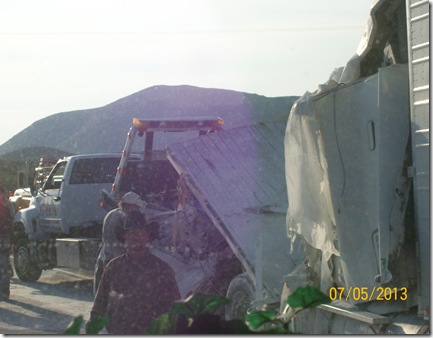 That is a car under a flatbed smashed like a can. We could not find out what had happened, but it would be a miracle if the folks in the car survived.

We had a good trip the rest of the way, but we knew it was going to be late getting here to El Paso. Near midnight and we dislike setting up after dark.  But we managed. 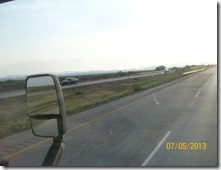 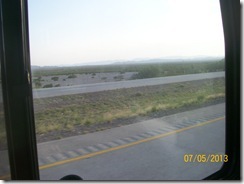 I was hoping you could see the mountains in the back ground.  They were hazy and beautiful. 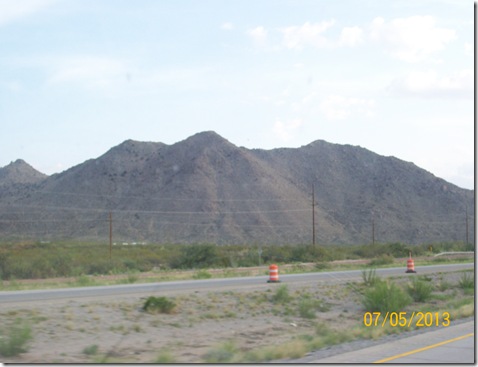 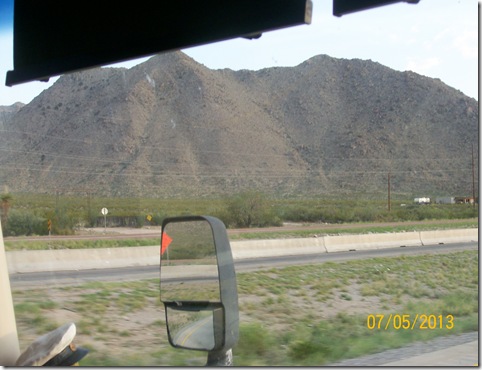 I like these barren mountains, they are so rugged they are pretty.

I saw a dog in the sky, but by the time Sherry was able to get the picture, It was Pinocchio. 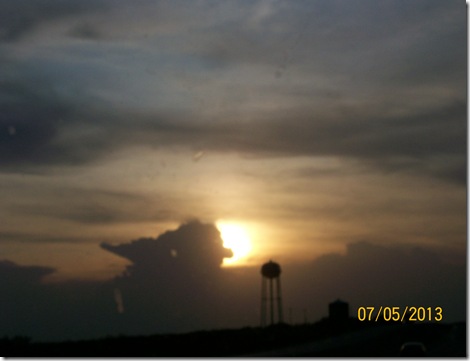 It is late here after midnight, near one am.  To morrow off to New Mexico….

Thanks for coming along.

PS: I got these two vehicles as we were leaving Del Rio.  (Excuse the mis-spelling, I know, you always do! LOL) 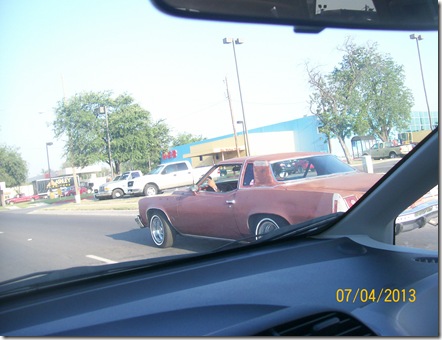 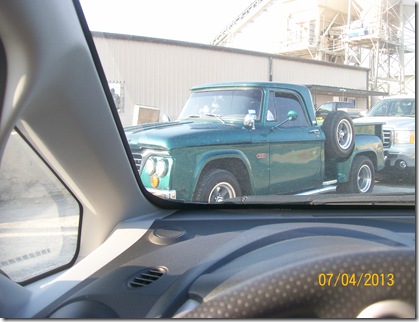 I nearly missed them and haven’t dressed the photos up. tired.

I'm glad the dental work is done and you are on your way again. Sorry you had such a long day, That wreck was a bad one. Something we all hate to see happen too. The country side is beautiful and so are the mountains.

Welcome to our desert Southwest, Jack and Sherry! The vistas do take some getting used to, but I love them... and hope you will, as well! Hope you got some welcomed rest last night ... what a day!!!

Your dentist was a good looking girl or lady, Sherry beats them all out. Are you going to meander on home.?? Going to get off. Problems with Chrome again but I am still there. I uninstalled and reinstaled.

Enjoyed your pictures. Looks a lot like Arizona and places in California.

I have taken pics and posted from the Art Deco car show at the Frist Art Center....just for you. I thought of you as I took the photos and the post is all for you and anyone that loves the old cars. Some of these are worth MILLIONS. George loved it. Hope you enjoy it. Go to my blog and visit and also connect to the website I have linked to it so you can see more about the cars! Ya'll be safe out there!

What a Sweet Dentist!

The accident on the road looked nasty and I pray the people survived it.

Loved all the pictures!

Glad you made it...So bad about
the dentist Father such a nice
lady.

Dewey and I were bitting our nails until we could hear from you. Gald you are there and set up.

Beautiful views, except for that horrific wreck. Beautiful Dentist, too! Sounds like the trip into Mexico was good and a great reminder that however imperfect our country, it's a whole lot better than most. God Bless America!

Beautiful dentist and sorry about her father. I went to see Mel in the 50's when he was stationed at Fort Bliss. Happy traveling!

so wonderful to see the sights along I-10 again...loved driving I-10...loved driving through El Paso...once did it in the MH with a tractor trailer on either side of me...with what looked like about 12 inches of clearance (both sides). Traffic in front, traffic behind, so I couldn't just drop back and let them go on...ah how I miss the adrenalin rush :D Don and I took the train once from Benson to Jacksonville...it was as much fun on the train as off watching from I-10. Don's favorite place was Ozona TX...there was a restaurant there he liked to eat at. Oh geeez listen to me...I'm so sorry about your dentists loss, so happy your teeth are done and the new great grand baby is adorable :)

My dentist wears a suit. I like the laid-back ambience of your dentist.~Mary

How sweet your dentist finished the work in the wake of her personal loss.

Nice description of the travels and really enjoyed the pictures, it would be awesome to see a whole train in the distance.
Enjoy your travels and take care.
Gary & Anna Mae

She is a pretty dentist. And I am so sorry she lost her father. I just think how much more we pay here for dental work and how long it takes to get it done - and there it is cheaper and quicker. Is it the dentist or the insurance that costs so much? And I have been in those long waits at the border too. Sandie