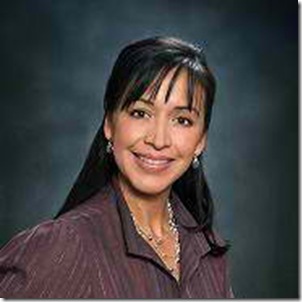 Is she cute or what? She is also good, she made sure our communications were right. She printed what she was going to do on her iphone for me.

To back up, it is about a mile and half to her office from the closest parking area. So we parked in a taxi lot and took a taxi, since it was our first time. $25 for the short trip. The bridge toll is $3 both ways. He dropped us right in front of her office: 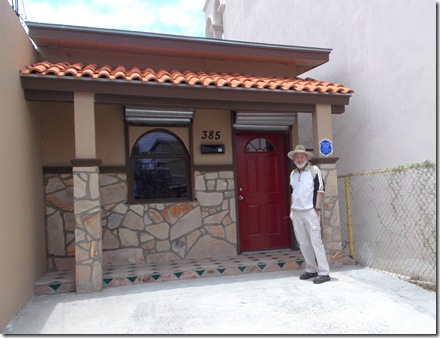 She met us at the door with a big smile and a welcome. We sat in the nice waiting room and I filled out a short form of information. 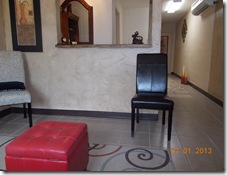 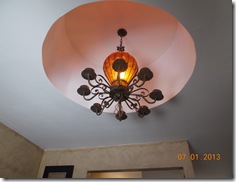 I loved the sunken light fixture.

She gave me an exam, took a couple xrays. Told Sherry what she had found, I said after the long conversation that I could not decipher. I told her to do what was necessary. She smiled and handed me the iphone that had everything listed and the price.

I was wondering about one very bad tooth  near the front. She smiled and said she would save it but it would require a post formed by the lab. I gave my consent and she started on a root canal.

One shot, and there was no pain during the 30 minutes she took for the Root canal. She said the two teeth needing crowns were on the opposite side and she should deaden it, One upper and one lower. I said no, go with nothing.  She said raise your hand when you feel pain! (on the iphone) She started in and I immediately raised my hand and yelled ouch! The man working on the A/C turned and looked shocked, then they all laughed.

All was completed by noon, including two temp crowns. She explained to Sherry we should go get something to eat. The lab would have the pin back by 2. We went to the place she suggested and it was closed for the day for repairs. So we walked.

Everyone on the streets were very friendly and mannerly on the narrow sidewalks. We were stopped by a city official, to see if we needed anything. He told Sherry of a nice restaurant three blocks ahead. So we went: 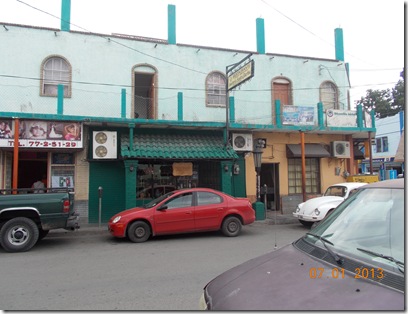 That is it, the one with the dark green paint. First problem, the waiter an older neat man spoke NO English. As I am trying to say I want soup, in walks Aide, the dentist. Unbelievable, she helped us order mine was beef soup, delicious Sherry had a stuffed Bell pepper and sides and she cleaned her plate except for the two bites she gave me. We also had a bottled diet coke. 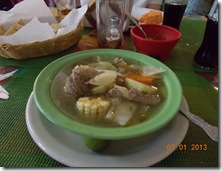 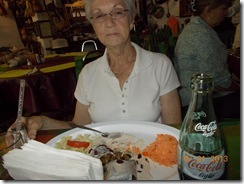 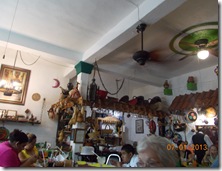 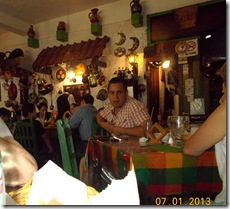 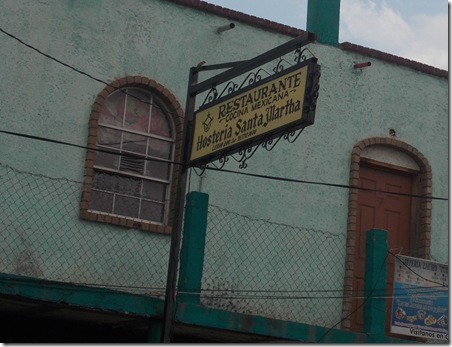 I will have to go over the area in tomorrow’s blog. This one is getting too long.

Back at the office, the post was delivered at exactly 2pm. At about 2:03 we lost power. So All is on hold until Wednesday when I go back to install the post and possibly the crowns.

Without getting into more, I know some of you want to know the prices. For a root canal, two fillings, cleaning, three crowns the total is $1500. I paid $1300 for a root canal then $825 for the crown in Florida. Also, she accepts a personal check.

I will continue tomorrow. Thanks for coming this way.

PS: Once years ago we drove to Progresso, MX  for dental work.  The walk over was about equal to one city block. This trip we just happened to be going West anyway, so we are only a couple hundred miles out of the way.

I saw an old Falcon Ford today, and did not get a picture. I also missed an Avanti here on base. I hope I see it again. 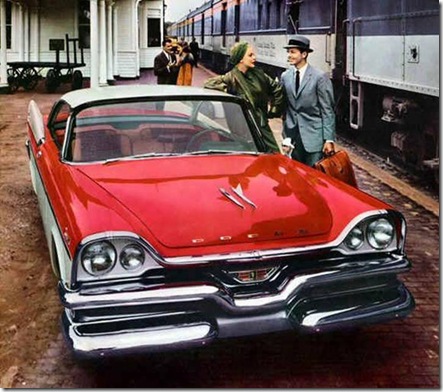 I cannot believe that you didn't want something to deaden...or for pain... until! :))
Give me Novocain....
And to get a root canal done in one day...is almost unheard of. I'm impressed.
You certainly got a lot done today, Jack. I look forward to the next post (not the one in your tooth...the one on your blog!)
Hugs,
J.

That is a lot of dental work in a day! Enjoyed the post!

You sure got a lot done in one
day. Sure looks like a nice lady Dentist. Hope things go well tomorrow.

That is a 59 Dodge like my first
car. Mine was all white with the
black fins it was a good car.

Oh my gosh - you know I am chatty and I am at a loss for words! WOW! That is a lot of work in one day! sandie

Weren't you exhausted? Doesn't look like the dentist office we went to in Mexico. You must be a tough cookie is all I can say. Yeah she is a cute dentist butttt. I've been thinking about you all, all day and wondering how you are. So glad things are going great. Got show John this post tomorrow.

Now that's a "Mouthful" of work U got done there...and in one Day??? never happen here and Never at that price. She still has nothing on your sweet Sherry. You behave now and GitErDone.
BlessYa

Glad your dental work got done for an affordable price. And that you were able to eat something afterwards.

That is still a lot of money but you would have paid a lot more had you been at home or maybe, most any where in the states close to home. You are crazy to not say yes to novalcaine. SPELLING is terrible . Joe is going to the heart team today and will have his battery checked. He is sure they are going to come in for a battery change on his defib.

happy your dental experience went well...I tried that no novocaine thing years ago...didn't take but a minute or two for me to raise my hand too :D

Glad you could get the work done and hopefully finished there in such a short time. Too bad the power went out. I hope it's not a regular thing there. It would be nice if the dentist here could work so efficiently and without charging so much.

You put this rather in a blithe way, but that is whole lotta dental work. So sorry you needed a root canal, but glad you found a good dentist. ~Mary