My fun time, showing off

I have friends, two sisters, Daisy and Ann. Both in their 80’s. When in Anderson, SC, Steve said Daisy needed a fire place cover. With my hearing I had no idea what he was referring to. So we finally got around to going by  Ann’s house on the way to  Daisy’s.

Some background. Our home church here in Belmont had a cake auction. Ann always bakes delicious cakes and gives them up for auction. Sherry has bid $200 for one of her cakes. (she does this as a donation). Anyway this week she came home from the auction with a back seat covered with cakes. Two of them were  Ann’s cakes, they had cake covers, so we needed to return the cake services (is that a good term, I am meaning the covers for the cakes). Anyway that is why we stopped by Ann’s first, to return the STUFF. Ann rode with us to Daisy’s house.

They insist on paying, Seniors are a lot like that, we want to pay our way, don’t we?

Anyway what Daisy needed was something to cover her fireplace opening since she never had a fire, the house heat goes up the ‘damper less’ chimney. 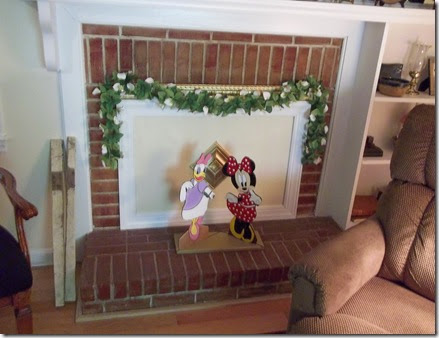 (I took Daisy D. and Minnie M over to see Daisy)

Sherry and I checked at Lowes and they wanted between $300-$400 for a professional cover I knew Daisy would not go for that. So after a little-bit I told her I could make her a cover. 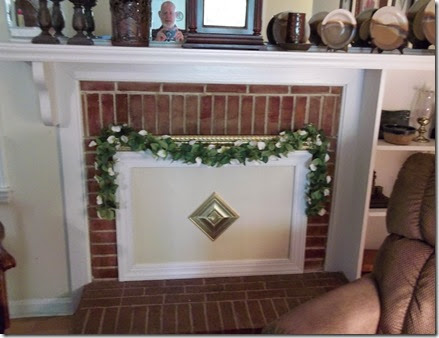 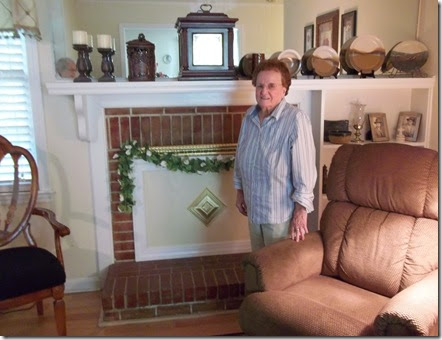 She was very proud of the results. Daisy told me Ann needed some work on her deck but would not ask because I would not accept payment.  I took care of the rotted board this morning.. 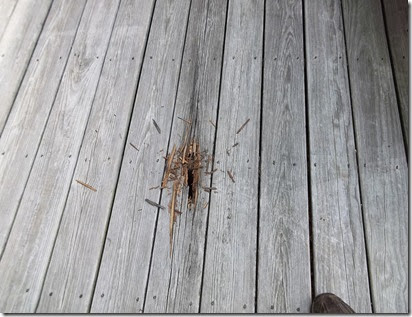 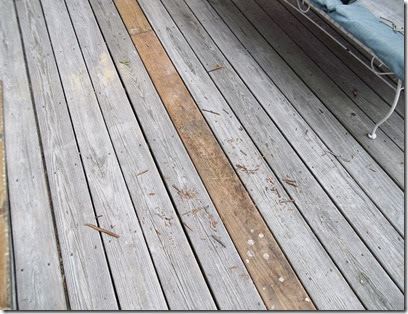 It is a pleasure to work for someone who appreciates it.

Here is the finished product of the Driveway fix at Shirls.  Shirl arranged the work, I just got the material ready.  That is Shirl’s house at the end of the drive. The house is actually at the end of another street and the long drive connects both streets. 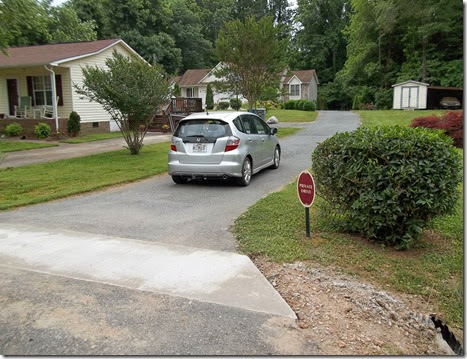 Does every one have a little show off in them?

Louis can show off all he wants to on autos. he is brilliant on auto info… 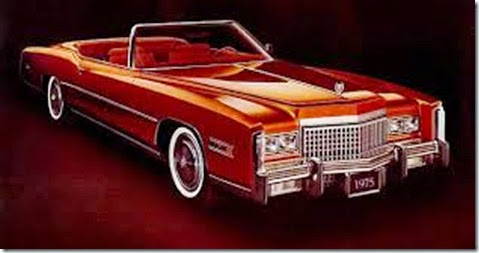 A handyman is worth his weight in gold and has every right to show off his work.
BUT that selfie that you slipped in on the mantel in the second pic might be over the top. ;-)

Very observant, I didn't think anyone would notice. I fit that one in. LOL That one sneaked up on me.. Maybe that is nit picking.(smile!)

lol luv the selfie...and I agree with Bonney. A handyman (contractor) is worth his weight in gold, but u my friend are priceless. Have a safe/fun weekend.

The fireplace cover looks very nice and I think you and Sherry are special to things for people. Mel did that a lot and would only let them pay for a part if something needed one. Now I've got to go back and see what the selfie is about. I took one of myself and it turned out so funny, like a ghost.

I had to go back and check out the selfie, LOL. Good eyes Bonny had! I think you did great with the fire place cover! I just want to know what you did with all those cakes?

Hey, if you've got it ... I say, flaunt it! :)
Mz. Daisy is a handsome woman, isn't she? She and Ann must treasure the two of you; and yes, I can empathize with them not wanting to take favors "for free."
That's the way my parents raised me; honestly, I think it's a refreshing trait. (Now who's tooting her own horn? - ha!)

You are right about Ann and Daisy.
I hope I have their energy when
I get in my 80'S. The fire place
cover looks good. I know Daisy
appreciated your work and Ann also.
Glad the driveway is completed.
Good picture of the area...

It is so nice what you do for folks. That fireplace cover looks perfect. What kind of cakes were they??? My mouth is watering just thinking about them.

You do good work and are blessed to have some good friends too. I know you love what you do so you are not only keeping busy but happy there too. After it decides to warm up a bit it looks like we're going to have a beautiful weekend. Only 45 here this morning!
Hope you two have another blessed day!

You are so talented and can fix just about everything! Sure wish you lived near me. I have such a hard time finding a good handyman that takes pride in his work.

Proud of you my friend.

When you are that good at doing things - you have every right to show off!