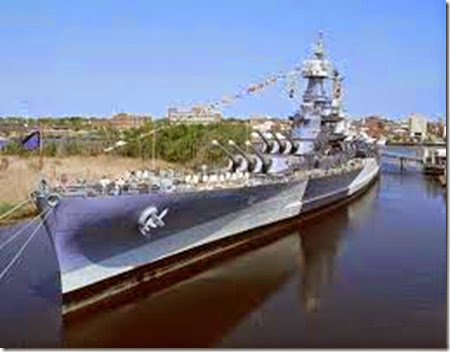 My two older brothers were sailors but opposites. Jr. was mechanical and had a green thumb. Junior was the business man and Odis more the happy go lucky kind of guy. Junior was a Gunners Mate and Od was a Ships Carpenter. Odis was an artist and a lover of woodworking. His occupation was ‘Truck driver’ as was many of my family. Our Uncle Hisure taught him the trucking business.

His route took him past the Battleship North Carolina every week. He attended the dedication of the floating museum.  He bought a picture post card and on the way home decided to build a model. 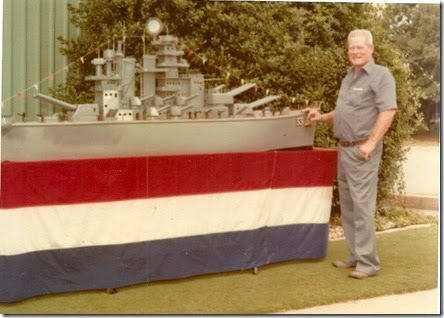 The ship was a winner, Odis won the coveted Gold Hammer Award, from Mechanics Illustrated. In an interview with the local paper he said, “I have no idea what I will do with my ship.”

The idea of huge models grew with Odis and his fleet grew: 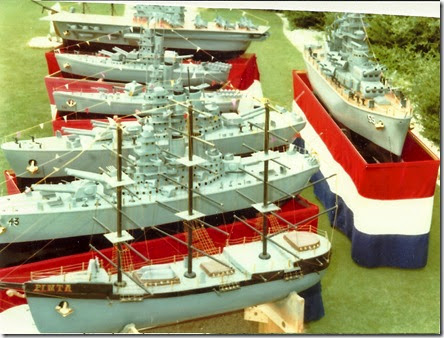 Two more Battleships, a couple destroyers, an Aircraft carrier and three tall ships, the Pinta, Nina and the Santa Marie. 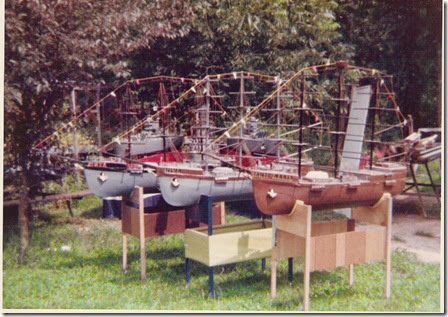 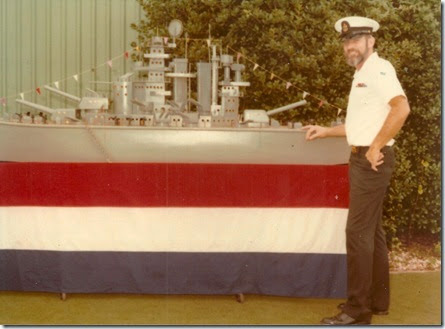 Me in uniform admiring my brother’s work. 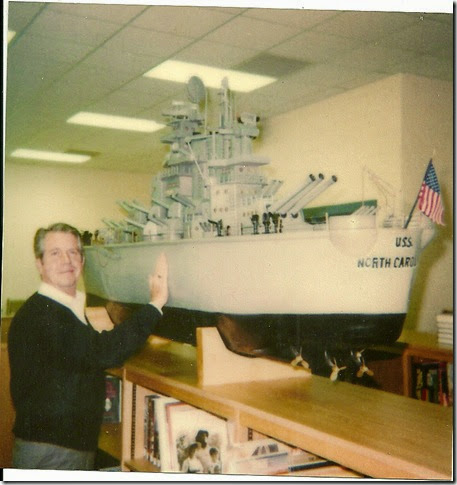 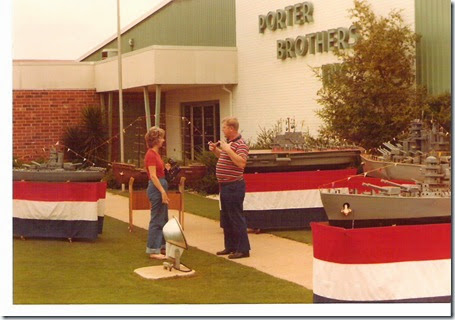 Above is Howard (Odis’s oldest son) talking to a reporter. Odis could build, but Howard was the PR guy.  A business man himself Howard knew how to promote. We lost Howard at the age of 36, he had a beautiful wife and family. His future was bright when death snatched from his loving family.

The ships took on a life of their own. TV special, interviews and requests to display them. 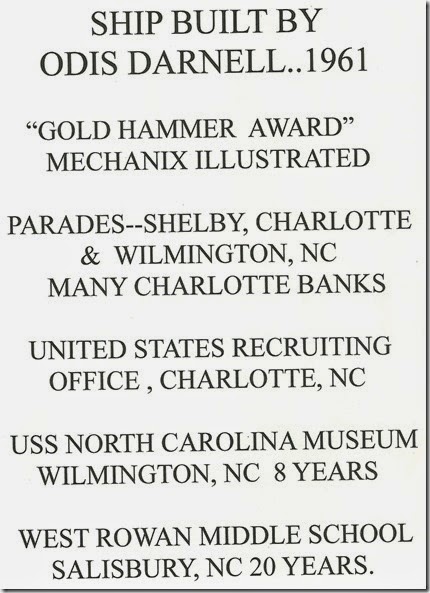 The NEW Wachovia Bank building in Charlotte displayed the entire fleet for a week upon opening their local ‘skyscraper’. 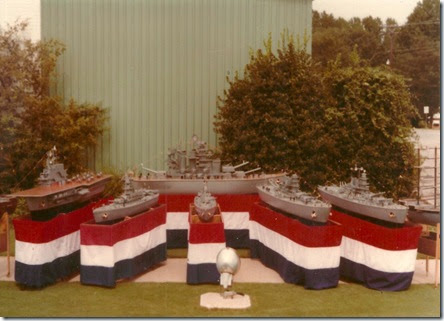 After Odis’s untimely death at 61 the family was approached by the USS North Carolina Museum in Wilmington.  Yes they would donate the model.

Shirl, Jim, Sherry and I proudly delivered the model to the REAL ship on site at Wilmington. This time it was Shirl’s time to tell about our brother to the news folk. 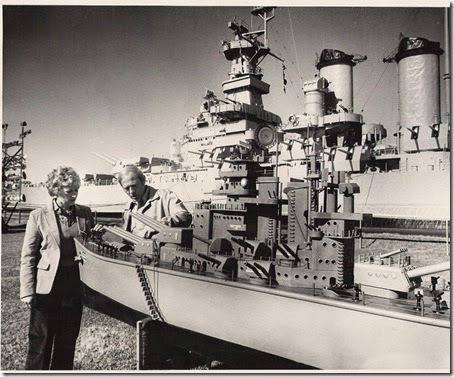 That is the real battle wagon in the back ground.

As in life things change. Shirl is the record keeper in our family. She stayed in touch with the Museum. After 8yrs, She was informed of another donor and a larger model, so Odis ship would be excess.

There was a school in Rowan county that would love to have it. With Odis’s wife Ruth’s approval the exchange was made. We, Ruth and one of her sons was there to see it installed.

After 20 years in the school library, it was again excess, ‘Would the family like to have it returned?’ Shirl’s answer was “Certainly.” So Shirl rented the van and we went down to pick it up. a few days ago.

Odis’s family has been informed and they will decide the fate of the model.  At present it is in Shirl’s basement as she proudly displays it for any and all to see. 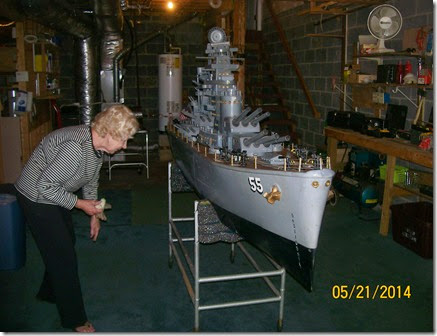 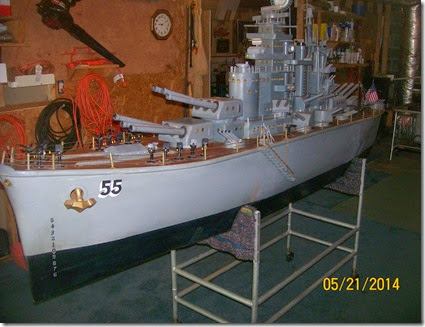 We were amazed after nearly 30 years of display away from the family protection, there was only minor cosmetic damage.

Anyway That is our family pride, the handmade model.

In a conversation with my brother I was chiding him about allowing a ‘stand-in’ in a TV interview.

“Jackie, do you remember that man’s name who presented the ship?”

“But you remember the ship don’t you?”

I knew him and I also knew he was right. 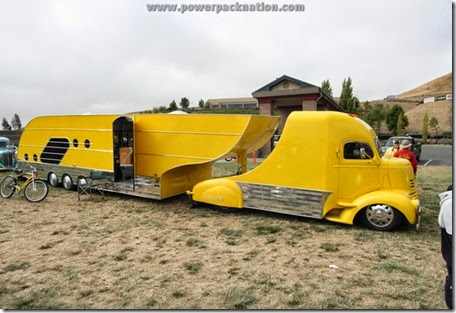 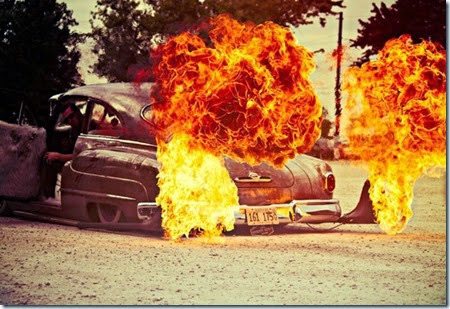 Methinks that is an old 1950 buick modified to reburn the excess from the exhaust. Looks like it is on fire. (I believe he is feeding more than excess!!!)

Your brother had a special talent. It's great that the models have been displayed in various places. I hope the USS North Carolina replica finds another public place to be displayed.

Your brother was very talented. I hope it finds a great new home also. Hope you all have a great day today! Sheila

I drilled in Wilmington in the Naval reserves, Several times as a Master at Arms, 1st Class we would be sent down to the USS North Carolina and our main function was to "look busy" which was a little hard to do decked out in Dress Whites!!! Beautiful and authentic looking replica your brother created.

What talent your brother had, Jack! Those look beautiful in picture and I'm sure better in real life! That is amazing too that for 30 years so little damage and so much interest in the fleet. I hope they find another home where others will come and see the talent created by your brother! Wonderful story for today too.

Your brother was talented and it's been on display for 30 years? I hope it finds a new home that will love and take care of it.

These are nothing short of magnificent, Jack. I never exhibited much interest (or talent!) in models, but one of hubby's passions is building and flying WWII scale aircraft. Another friend is into battleships, but nothing of this caliber. Like Sandie, I hope Odis' boat finds new life somewhere it will be appreciated!

What a legacy to leave behind and share with others too. All the hours it must have taken to build something like that took some real dedication and commitment. Your brother is one to be proud of for sure. It'll be interesting to find out where it makes port next.

I am glad to have the ship home.
It is 53 years old and has
accomplished the job our Brother
would have been proud. It taught children history. Will wait to
hear from Helen. It is safe and still being viewed by friends.