We traveled as much as we could before retirement but with retiring we got serious. Once we bought the big 38.5’ Overland with the rear diesel, we just had fun. With no chains to hold us we traveled many miles and stopped at RV parks for a week and toured the area around the park.  Small towns and natural wonders were our forte’.
We also enjoy outdoor dramas. Hiking the Appalachian Trail,  we got the chance to see “The Long Way Home” (from the book“Follow the River”) in Draper, Virginia. They were working on the theater and we saw it at an alternate site, indoors.  We  both read the book and were intrigued by it. It is an amazing tale of a woman’s  strength (Physical and mentally), escaping after being kidnapped and taken 850miles from her home. She Escaped and survived the trip back to Draper by following the river.
Dramas we have seen:
Horn In The West, From this Day Forward, The Lost Colony, The Hatfields and McCoys, Unto these Hills, Evening with Stephen Foster and Oklahoma. I might have missed one or two but There is something about an outdoor drama I enjoy, even if I cannot hear anymore.

Odd, in my youth, I lived where a small part of history was made and did not realize it. We went to see “From This Day Forward”. The story of the Waldensians, of Italy, settling in America, and the drama was actually within a block of where I once lived in Valdese, NC.  I have flown kites in the field that is now the Drama parking lot. Flying kites and dreaming of days I would travel to see the rest of the world.
With my dog Ace, I would hold onto the kite string and dream of days I would see the WORLD, as the clouds formed and re-formed my fantasies. My dog Ace is buried just a block from the drama.
For three years I attended school with some of the Waldensian descendants and never realized the significance of it. That small mountain school was unique. There was a stray St. Bernard, called Anchor, who became the school mascot and ate from lunch sacks what the students would give him. We also had a huge Crow, TOM, That would sit on window sills during class. 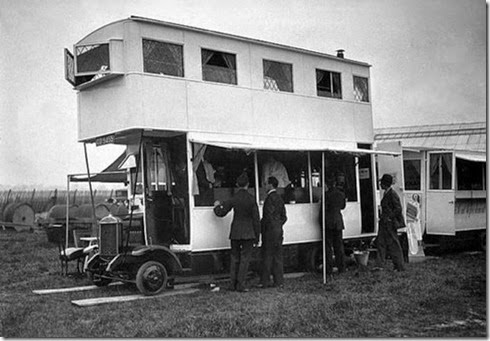 This is a traveling restaurant (One of the first traveling Roach coaches). Proprietor's home is on the second floor, auxiliary dining is towed.

Sounds like fun! I love the stories.
If I had followed my dream, I would have lived on a yacht, sailing from harbor to harbor in the Mediterranean Sea. Well, maybe not, but I have thought about it....lol.
I hope you enjoy traveling many more miles.
DD

You've really got to see a lot of wonderful things traveling the way you do. It is true though that there is a lot to see right in our own backyards so to speak. I'd never heard about the Waldensians. Now I'll have to see what I can learn about them. Hope you all are enjoying that good life and have a wonderful Wednesday!

You have had a Wonderful Life. And that roach coach is so funny looking.

Never heard about the Waldensians before. Interesting, I'm sure. Not everyone can live out their dreams. You've been blessed.

That was interesting, Jack, with a little bit of history so close to where you lived. Lots of outdoor dramas you saw; I don't think I've been to any! It is good that both you and Sherry both had the travel bug and enjoyed all the places your RV took/takes you!

Gosh, but these tales make me want to turn my back on all that's 'conventional' and follow in the Darnell's footsteps.
In truth, I know your adventures didn't come without some careful building blocks!

My father used to speak of going to 'summer stock theater' in New England. Is outdoor drama the same, I wonder?

PS - Just my 2-cents worth re. yesterday's post? I'd be mighty UNhappy if my son -- caught in a jam -- were reluctant to reach out. It sounds as if you all enjoy wonderfully strong bond.

Valdese was my favorite place to live. The old HS being next door to our home. The outdoor drama was good. That is the part of History in our life that was fun. You are right Dad would do anything for his children. We had wonderful parents.