Trip was great with a surprise

We drove down within 30 miles of the Georgia line.  WE had a great visit and Steve wanted some ideas of adding on to his home. They took us to lunch at Aunt Penn’s I think. Great food and better company. Steve and Linda are super folk to be around.

We also got to see ‘Mazie’ Linda’s mom, either in her 90’s or approaching. Her mind is still sharp. Mazie and her hubby Grady were charter members of the church we built at New Hope.

Lots of memories and tales. Outside looking at the possibilities of adding on I spotted what I thought was a ‘51-‘53 Buick a in the next drive way. I could only see the windshield and the op of the hood. Steve said, I think it is a Packard.

We walked down so I could take a picture the the gentleman permitted a shot. Then he walked over. I asked is this a ‘53? Yes. 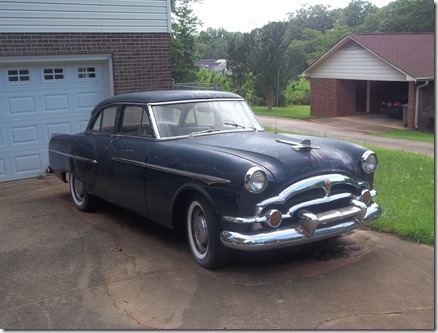 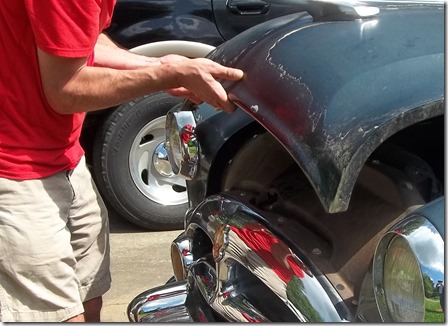 He started to raise the hood and wasps swarmed out. He kept on, and I said that isn’t necessary, but he raised it and did not get stung. Below is how close his fingers were to the nest. 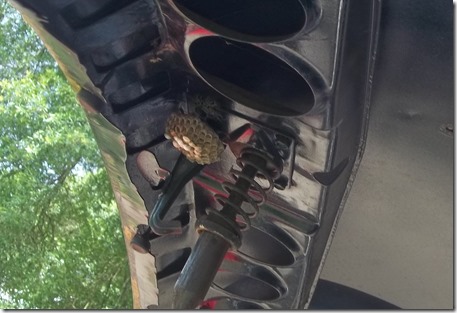 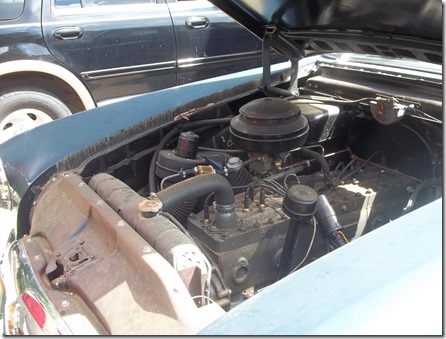 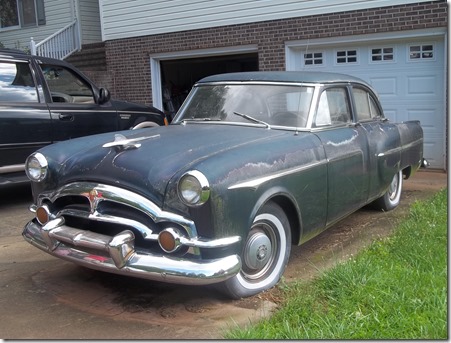 The sun has ruined the paint job. 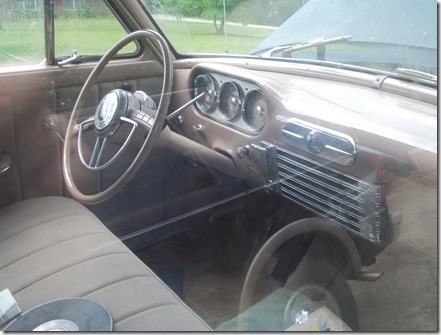 The interior looks good. I asked, “What would it take to drive this home?”

Yeah, it is still in his drive way. (But it might be under the Christmas tree?)  (reckon?)

Continuing the cars that never made production

a few years ago
wasps started making
a nest inside the door
of my Buick
I think that happens
when a car
hasn't been driven
for some time
it's fine, now

Beautiful car!! Interesting how much he spent on it a few years back and how much he would sell it to you for. That would be a bit scary with the wasp nest. I have heard mice will take residence sometimes in car engines. Sounds like a nice visit with friends :)

That's pretty cool about his being willing to part with it for only(?) 7k.
Ya, you and Sherry'd look right smart cruising down the road in that classic!

Hope she puts it under your Christmas tree. Gives me chills to see how close his hand was to that nest.

great story about the car. I was surprised he so easily put a price on it given it's history. Should have been priceless.

If you get that car I hope the wasp nest is removed first. Guess you got two surprises with the wasps flying out like that. Glad you had such a good visit. Hope you both have a wonderful Sunday. Overcast and very humid here. We had more rain overnight. This week is going to be a busy one as family is coming in from out of town, for the first time in many years, I'll have all 7 of my children together at one time.