Need a bath? No soap needed!

For a few years of my life we used homemade soap. Many folk called it lye soap. I think it was always made around ‘hog killing’ time, because the lard was available in abundance. 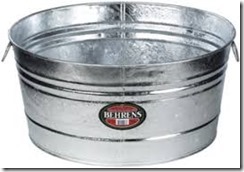 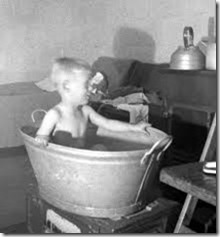 (Mama’s tubs were all round, I don’t remember EVER seeing a new  tub, we always had two, holes could be patched)

I remember bathing in a tin tub for years. I hear in large families, the ladies got the water first followed by the boys. I think than meant boys were considered dirtier, in today’s world that would be sexist, the truth would not matter.

I liked Ivory soap, it floats and I had no problem finding it. Baths over the years have become more frequent because they became simpler and easier obtained. Women are the ones who pushed that, us boys could still bet by with two a year.  hahahahahahaha. 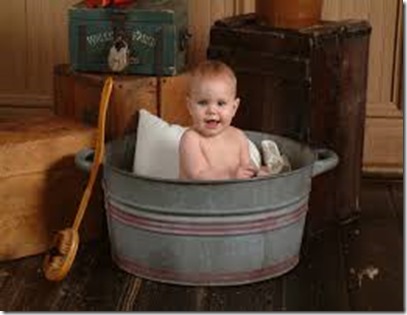 Watch this guy get a bath, and use NO SOAP!

You must admit it is different.

PS: We are headed to the Doctors today. Sherry for her annual and after that a 3hr drive to show off my healed incision and permission for he Cochlear specialist to TURN IT ON next month.  WE are out the door. 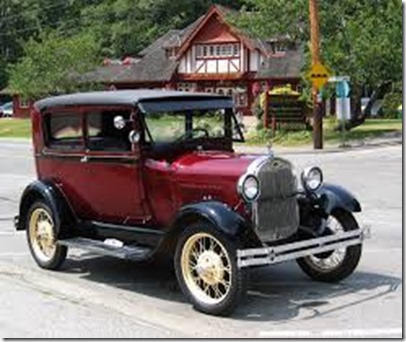 I for one need my soap and bubble bath. Ha ! Hope your appointments go well and you have a safe trip too.

I wondered when you would be able to see if the cochlear implant worked. Hard to wait another month, but hoping all appointments go well! Haven't taken a bath in years, but do enjoy my morning showers (except when I'm in a water conserving mood and turn the water off while I'm washing, LOL :)

That video was so sweet, Jack. What trust!

Hope by the time you see this you're back 'home' safe n' sound with good news from your surgeon!

BTW, I'm really enjoying Vacation. In fact, in my next life, I want to be BFF's with Doctors Jerry and Sherry! (*smile*)

I thought about You and Sherry traveling in this rain. Hope you
got some good news. I know you both are tired let me know when you
have time what you were told.

And I can tell you something else about those baths in the galvanized tubs. we froze on one side and burned up on the other in winter. Maybe we were the only ones who only had one heater and would you believe it was in the dining room? Real county hicks but you know I think the way we lived made me appreciate the things I have now. Think I'll go take a good hot bubble bath right now.

Those metal tubs brought back memories, we always started with the youngest and went up the ladder! And I remember making lye soap, just recently found some in local Ace Hardware made by "grandmaspureandnatural" and it claims to help with insect bites and hide human scent for hunters!
Hope all went well with both appointments, looking forward to news of your implant success!

The video of the bath without soap was great. I think I saw a bit of t-shirt used for a towel.