The first museum I was ever in was in Raleigh NC.  I must have went with our 9th grade class in a Bus to Raleigh. We did not get a long time inside, but enough to whet an interest. Once, Dad took me to an  Iron or Steel Museum near Birmingham one year.

Strange, we have never visited two well reported museums within ten miles of our home in Belmont. We do mention going, just never get around to it. 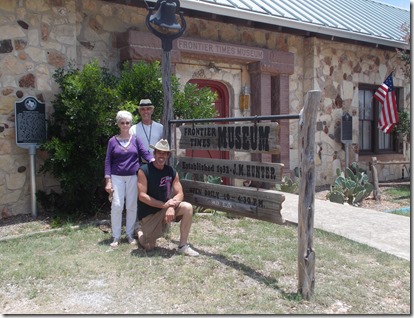 (Sherry and her sons in Bandera)

There is a small Museum in Bandera, Texas.  We have actually been there twice.  Frontier Times Museum. Bandera is the Cowboy Capital of the World. You know, real cowboys who are champions in riding and roping. Rex Allen an actor, but a  real cowboy from AZ. I thoroughly enjoyed the Rex Allen Museum in Wilcox, AZ

I also mentioned ‘The House of The Rock’ on the Shipslog, it is a museum to itself. The Henry Ford Museum (referred to as only “The Henry Ford”) in Dearborn, MI. The Studebaker Museum and also the RV Museum in South Bend, IN.

And then there was the General Patton Tank Museum on Fort Knox and an Air Plane Museum at Hill AFB, Utah. One should never forget the Potato Museum in Idaho. 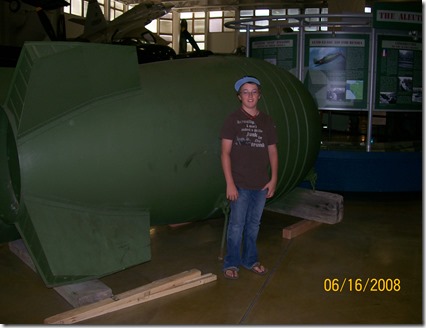 (Ever wonder the size of the A-Bomb? Grandson Luke beside a ‘Fat Boy’ Atomic Bomb (shell) at Hill AF)

There are towns themselves that are Museums, like Tombstone, AZ that I have talked about here.

But the Grand-daddy of all museums is in Washington, DC.  Free admission and displays you will never forget. Our first visit was back when Lyndon Johnson was president. For basically a country boy and his family, we walked around amazed at the things on display in the Smithsonian's.  If you ever have the chance GO VISIT. To be honest it is about the only REAL thing in Washington.

It is impossible to describe the Museums of American Natural History and the Air and Space  Museums. There are 19 museums in all, I did not know that there were that many.

Seeing the USA is an education in itself. Sites like The Alamo in San Antonio is HISTORY, the fact that now it is a museum is secondary. 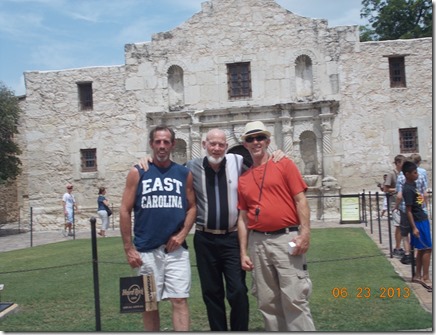 We have traveled and driven over a million miles and have never been bored at life and history, I consider being on the road as a museum of life. No museum or artist can depict a desert or sea sunset, no one can touch the peak colors of autumn in the mountains. 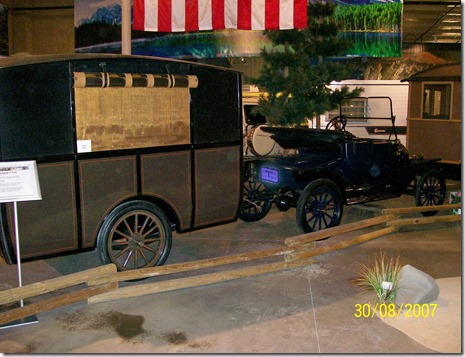 From the RV Museum 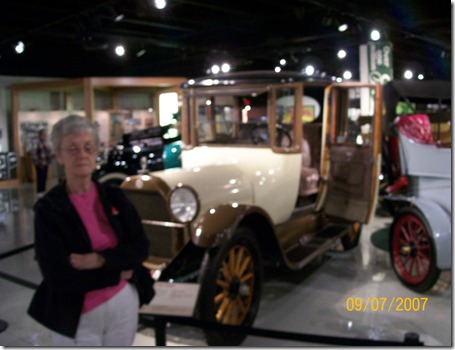 From the Studebaker Museum

I was stunned to see 'Fat Boy' someplace other than the replica in Los Alamos. (I think there's a photo in one of my yearbooks of the cheerleaders sitting astride it.)
... and Bandera being the cowboy capital? That's one I never would have guessed!

I've no desire to go to Washington DC, but seeing the Smithsonian would be an indulgence, indeed! (Love your aside about it being the only thing there that's not fake!)

I remember being amazed when we realized the Smithsonian museums were all free, even the zoo there! Sure was easy on our budget when we were visiting back in 2005 and all that we did see were so very tastefully done and kept up well.

Always enjoy going to museums; so very fascinating to learn different things of history through them :)

I had a Studebaker Museum in my back yard..Lots of visitors would
come to see the cars. I enjoy museums..we have some very close to
were we live. This computer is doing its own thing tonight..I need
to shut this one down and go to my new one.

I spent three days at the Smithsonian when my daughter lived in Virginia. Never been to the museum at Bandera but the ranch my daughter just bought is very near there so maybe when we're passing through we can stop there.

Oh I forgot to say we have The Longhorn Museum here with mostly Atascosa history, As you walk in there is a very large longhorn, stuffed of course and was donated by the husband of on of my linedance friends.

I'm thankful for museums that help to preserve history. It's important for all of us to realized what has happened in the past that had made what we know as the present. You've seen some of the best for sure. Sometimes when I look around my house, I think it's like a museum, lots of history and old things here too. All of us have some of those things.