As we grow older, hopefully, we learn to think:

Our RV life has presented so many wonderful experiences. We have accidentally ‘ran into’ some neat festivals and ‘happenings.’  Once just riding around in Roundout Valley in NY we attended a great festival. Sherry bought some homemade jelly 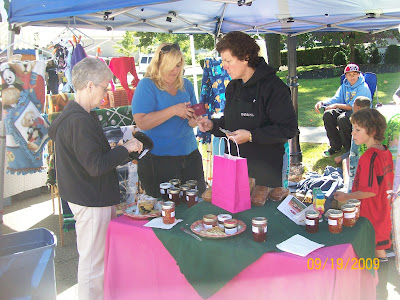 and I got this GREAT shot of one of the happiest kids I had seen that day, as he ate an ice cream cone his mama was feeding him. I asked permission to take his picture and his mama graciously allowed it. 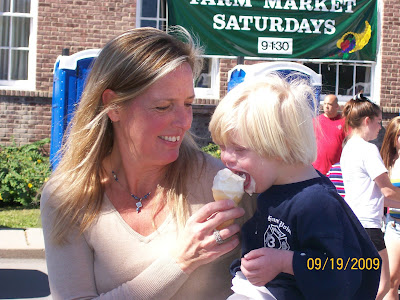 A couple years earlier, on the way to  Hyde Park, we ran into a county fair at New Palz, NY. Shucks, this cheap skate  smiled when I read the sign, ‘Seniors Free Today’. So we went in.

(insight) We have friends who are song writers. Many of us have internet friends, Rick & Jilda, who write songs over in Alabama.  Three of our friends (the Ward brothers and Bill Waters) have written religious songs that have sold tens of thousands copies. The writer seldom gets any acclaim, but the artist that performs the song does. In a little research the other day I learned ‘Joe South’ wrote, ‘Down in the Boondocks’.

Now, back to that County Fair. Who was featured at the county fair for entertainment? Yeah! we got to hear Billy Joe Royal sing that song in person.  We got in on an afternoon with the ‘Boon Docks and Rain Drops Tour' featuring BJ Thomas and Billy Joe. I admired and have enjoyed both artists. It was hot that day, they performed in the sun  and they were GOOD, SWEATING, they gave it everything they had! 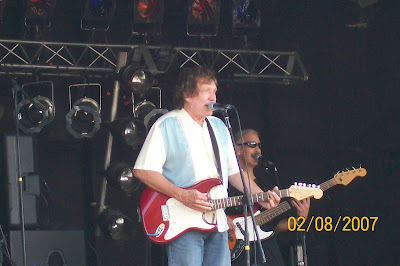 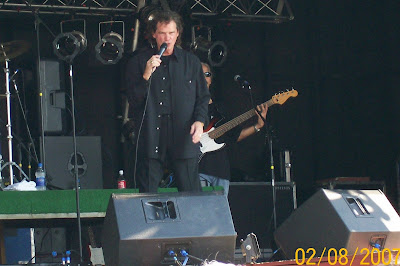 My new book, Our RV Life, is about the big and small things we have enjoyed. This short trip, a week in Lynchburg, two weeks in Williamsburg now finishing two weeks on the ‘Eastern Shore’ has been one of the 'Just a nice time.’  This is our first time to ‘take time’ so see the area. We class this as a ‘Pleasant time’. One visit with dear friends and many great walks 2-4 miles most days.

This entire blog entry was written to end with a new friend we met while walking. He/she was not talkative although I chatted nonstop for 50-100 feet the dude just walked along with us.  We see a lot of gulls and wild geese here, but this little friend was a pigeon. 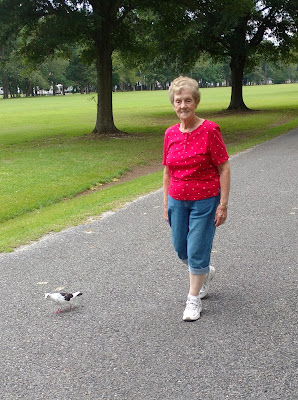 Even the small neat ‘gifts’ make this life a thrill.

Nite Shipslog
PS:  Reality check.... While we enjoyed the Rain Drops and Boon docks presentation a young girl standing beside Sherry, pointing to the stage,  asked, "Are they supposed to be somebody?"  Now that hurts!!!!
Posted by jack69 at 1:16 PM

'Are they supposed to be somebody?'What are you trying to do, make me feel old? I would have been singing along.

Songs stick with you and remembering them is to the songwriters credit. that jelly sherry got sounds yummy. and so is that ice cream cone. county fairs are always fun.

It's been forever since I walked about a county fair. God willing, next year I wanna partake in one or more ... even experience a 'pleasant time' without worrying about the calendar, fighting traffic and getting back to the office.

You and Sherry have certainly seen and done a lot in your life. Interesting how different people are. I'm content to just meander along on a country road. John will say that was a "dry run" and I say a country road is never a dry run. We saw trees and fences etc. etc.

Okay you are talking about some oldies but goodies there. I remember ‘Down in the Boondocks’ - our kids may never hear it!

Great visitor on your walk! Who cannot enjoy a county fair? So many wonderful things to see and do!

Now I'll have Down in the Boondocks dancing in my head the rest the night.lol
Ya gotta love a pigeon on a hike., love it and his walking partner.
I wanted to go to the county fair this past weekend but it rained the entire time. The 4-H members with small to large livestock have an auction of some of their animals....I did get to listen to it on the local radio station. A young gal sold her rabbit and it went for $375 dollars...of course, businesses pay the big price to the kids, larger livestock is sold by the pound., some going for $9-$10 bucks a lb. Most kids put the earnings right back into purchasing more livestock or save it for college. Very good experience for them.
loveya'll from up north where I spent the day at the farm helping Mom can pickles and sweet pickle relish. It was a fun day.