What is this about Camels in Arizona?

1.    The largest ocean liners pay a $250,000 toll for each trip through the Panama Canal. The canal generates fully one-third of Panama's entire economy.
2.    More than 2 billion pencils are manufactured each year in the United States. If these were laid end to end they would circle the world nine times. The average lead pencil will draw a line 35 miles long or write approximately 50,000 English words.


In one of the little known facts I posted was the Arizona law against Camel hunting. That keyed a memory. I remembered something from our ‘wandering’ early in our travels.

When folks are living full time in their RV, you look for places that are reasonable (or cheap) to live.  In that search you always hear of a place called Quartzsite, Arizona.  It is surrounded by BLM Lands (Bureau of Land Management lands). The little town of Quartzsite HAD a population of about 500 (now about 2,000 methinks) but would swell to about a million in the winter due to folks RV’ing for free in the desert.


(left side is Quartzsite in summer, Right is the winter) 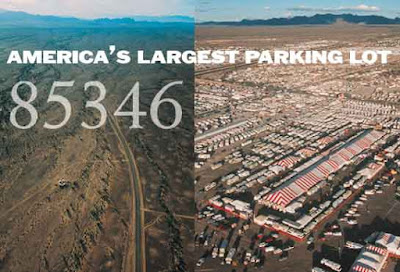 For many years it was not regulated. The trouble with pollution of the desert required dump and water stations. The Government installed them and now there is a charge, around $100 (?) for the winter, still reasonable.


We have visited Quartzsite at least 2 times. There I learned of Hadji Ali from Syria. He became known as  ‘Hi Jolly’ the camel driver.  There is a monument to Hi Jolly in Quartzsite. In the mid 1800’s someone came up with the idea of introducing Camels into the Military. Since France and other countries experienced success in Northern Africa, it seemed logical. 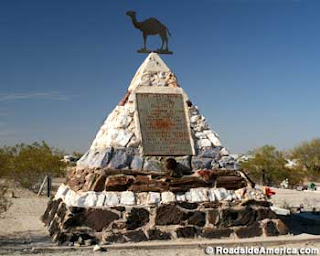 Along that line of thinking Congress authorized $30,000 for 50 camels and 10 camel drivers. Of the camel drivers Hi Jolly seemed to be the most well-known and liked.  The attempt was a failure and eventually the camels were turned loose to fend for themselves.  I assume they faded away, but the incident did produce the law enacted concerning camel hunting.  Evidently that law has not been reversed. ;-)

At least someone found a camel! 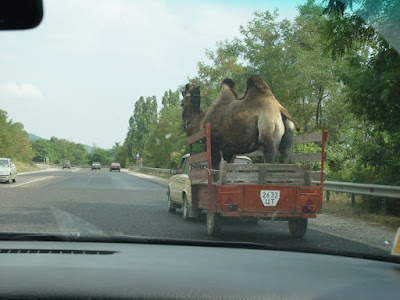 You come up with the best stuff.
Lisa

How cute is this?!? Back in '02 I paid for the privilege of riding a camel ... and loved the feeling of sitting in a moving rocking chair!

Interesting about Quartzsite's history. (Love getting history lessons via blogland .. that I probably ignored while in school.)

i enjoyed this charming story about camels .

How interesting! I will have to share this with hubby; I don't think he is aware of it. We've see a wild burro here but never a camel. We'll let you know if we do :)

Humm never seen a load of camel before. All interesting.

The only camel I've eve seen has been at a zoo. But then I'm not the traveler you are. It is rather strange that camels didn't fare well in our deserts though. We've had a stormy start to the day here. Definitely no desert in Ohio. We've had a wet summer.

Thanks for keeping us informed. I would never have ever known about it being illegal to hunt camels in AZ. I'll have to let Mom know as she still is a hunter. lol Great stuff Jack.
love n' hugs from up north where it's 55 degrees and it feels great!!!! Have a relaxing weekend. So what's the plan?

I saw a bunch of boats go through the canal while air was stationed there.
R