…  In more than half of all states in the United States of America, the highest paid public employee in the state is a football coach.
…       It costs the U.S. government 1.8 cents to mint a penny and 9.4 cents to mint a nickel.
…       Almost half of all Americans (47 percent) do not put a single penny out of their paychecks into savings.

Do you have any ‘empty’ spaces in your home? When we make an empty space in the Motor Home, we (I) usually fill it in no time.  Just beside my chair to my left is a small freezer.  It produces ice (in-trays) and holds freezer over flow. Sherry is an ice eater, she enjoys chomping on ice cubes. Do you know an ice eater? 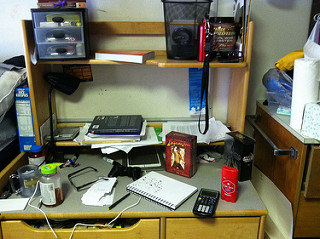 Anyway the top of the little freezer is a ‘catcher.’ I determined three days ago to clear it off. I did. I just noticed it is cluttered again’

We have storage compartments below our floor, it is called a basement. I pretty well have it full of ‘Stuff’. We store our patio chairs, outside tables and rugs. Two of the compartments have OUR stuff. There is also an area for ‘Sun Drop & cokes’ for visitors. But the most that is stored there is my domain. I have enough tools to rebuild an engine or house. I don’t plan on doing either but one never knows.

I like extra stuff. Things break here and need replacing and fixing, there are Plumbing and electrical tools. So far I have been able to keep up with most problems. Even fixed the two doors I broke leaving out the other day headed for tires. (I hated the damage to the coach, it hurt my feelings, it was my fault!!!) BUT I really am a Tinkerer, It takes tools to tinker. 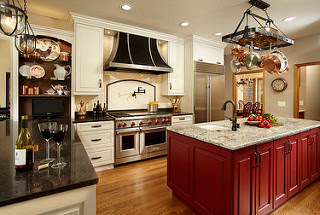 I have built houses with Kitchen Islands, but never one for us. If I were to build again, I will install an Island with a stove and working space. I am enjoying cooking and I like things handy. I want all the pots, pans and big utensils hanging within reach. 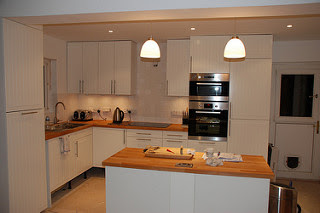 Sherry took care of the last two days meals. Today was my time. I fixed an involved Vegetable soup. I think I used everything we have. At least 8 veggies. I also made applesauce. I make it without peeling the apples.  Soon I will try it seeds and all. I am sure it can be done.  I love chopping and dicing. An island would be ideal.

Do kitchen islands excite YOU?

Nite Shipslog
There was a period of auto building that the gas tank filler was hid. Below is the '56 Chevy pic I received the other day.. 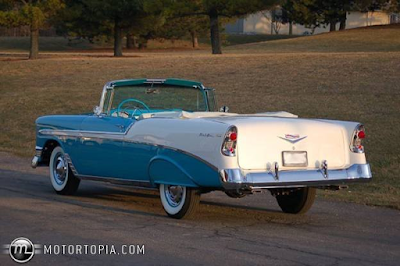 The e-mail was a joke about the '56 being stolen and the thieves could not figure how to put gas in it. do you know?

The left tail light had a reflector you pushed or turned the chrome stick above the light, (I forget which) and the light dropped. 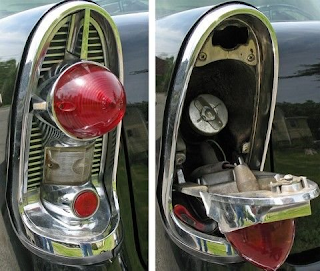 and there was the gas cap!

i'm not big on kitchen islands but i am on ice cubes. i'm an eater of ice cubes too sherry. love them.

Excite me? Ummm, not as a rule ... except when I become overly annoyed because Tom's filled most of the surface area (again) with all sorts of this-and-that's. I guess that's a guy thing? :)

I was so excited to find an olden house on-line at a reasonable price, but had to back off because of the plumbing and electrical work it requires. Dang, I wish you were closer!

Just read Myra's comment. You will be closer in Alabama than Phoenix. Might have to work out some deal with her :)

I like things really pristine so a kitchen island wouldn't work. It would get in my way. I keep clutter to a minimum on what I can control. I hid hubby's clutter in his office where I have no control :)

A couple of the kids have kitchen islands that are constantly in use, breakfast, homework, art, cooking....yes, would be nice. Our kitchen is tiny and only holds my portable dishwasher which does have a butcher block on the top. For the most part, however, it's holds my huge antique butter making bowl with a fruit bowl nestled inside for fresh fruit and veggies. Next time you're way up here in God's country, I'll have to compile a list for you and Bill to tackle. LOL Sherry and I will sit on the deck, supervise and crunch on ice chips. You two have a fine week.
lovein'hugs from up here where the sun is once again warming us with fall-like weather that we are so in love with. Bill is in 'our' basement measuring an area for a pantry...YEAH...loveit

Yes, if I have space I fill it up. This home of mine is much smaller than I had so it filled up rapidly. There is more I need to get rid. I do have a little rolling island/ cart for the kitchen. I bought it when I had the camper and needed extra counter space to sit the coffee pot on. It has a cutting board top and two shelves below. All of which are full. I would love to have a little freezer for overflow, but haven't found a place for one yet. You all make good use of the space you have. You are blessed to be able to be able to fix things the way you do and your soup sounds wonderful!

Never had a kitchen island so don't know if I would be excited but I don't think so. You're quite the cook, bet Sherry appreciates that. Mel was good at it but didn't have much time too. If I don't stop by every day I'm thinking of you. Quite a bit of stress going on here some days.