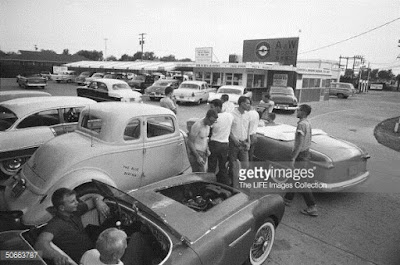 Life at a drive-in, 1950s
*****   ***      *****  ******    ***
There are people whose forthrightness make them beautiful. Judy is one of them. We learned Al was very sick. An infection developed under the care of a doctor. We were in Maine and wanted to see them. Sherry called and mentioned we would like to come by and see them.
Judy said, “Sherry, it is not a good time.”
Sherry said, “Could you call when it is? We are camping nearby.”
“Sure.”
We had a great site overlooking a small fishing bay and village. We were in no hurry. It was pleasant watching the boats in and out of the harbor. We also scouted around Millbridge and enjoyed the area. In a couple days Judy called and we had a Last visit with Al. 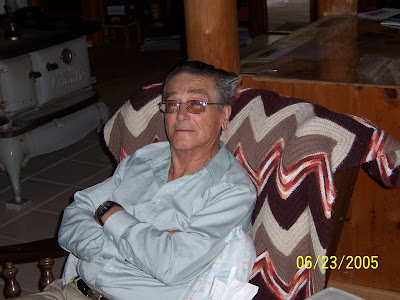 Al and Judy ran “The Brown Box Pie Company” out of that log house. We were fortunate one day much earlier than our last visit to accompany them on their route. They ‘raked’ their blueberries, picked their fruit and Judy made the pies. Al made the heavy boxes, prided himself on being able to stand on the box and not hurt the pie. 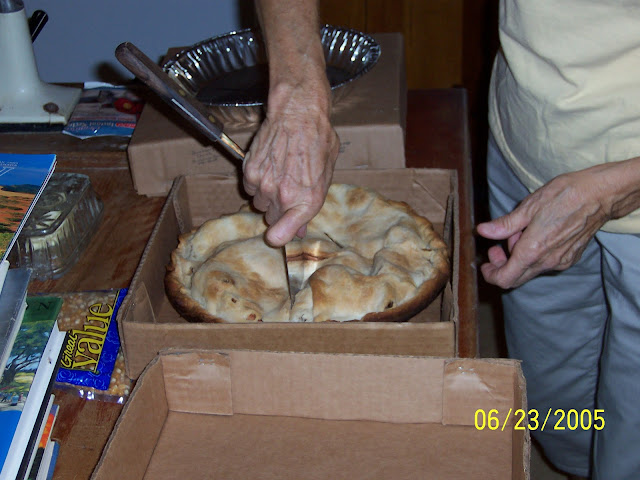 (The pies were delicious)
As I mentioned One winter in Florida, Al allowed a finger and a toe to ‘rot off’ (I called it). He said it was nature taking its course. And yes he kept them in a zip lock bag. I think the ‘mummified’. 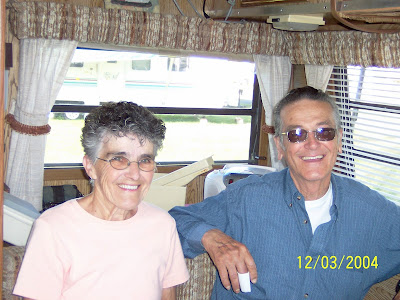 The finger was starting here. He never did get sick.

He refused to eat anything that had been ‘nuked’ (cooked in a microwave). Once, BEFORE SHARING DINNER, Sherry had baked potatoes in the micro wave. She told Judy, “Don’t worry about it, just don’t tell him he won’t know the difference.” 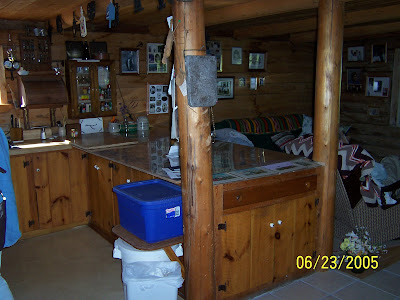 The first floor of the Log house was all open except for the laundry and toilet, this is the kitchen area.

One more thing I consider important to mention. Every Saturday they religiously went to Mass. We were in Maine once again after Al has passed. Going to see Judy we drove past the Catholic Church where Al’s funeral was held. Sherry or I mentioned passing her church on the way.
In that beautiful Mainer accent she said, “Oh no, that is not my church. I am Baptist, I attend with mother now.”  She explained Al was Catholic. I attended church with him, he was the head of the family. Once he passed I returned to the church of my youth.” Definitely a unique HUSBAND AND WIFE.
We try to see Judy at least once a year, she is such a dear friend. I thought how good it would be for us all to 'know how to be frank, without being insulting.'

Most of us southerners, me included, would say (even at a bad time), Oh yes, come on over. Then hurry around to clean, rearrange and prepare for company, even though it is not the best time.  It always works out, but it would be less hectic.  (We are getting better at it. LOL)

PS: Little known facts about the USA
Thanks.. Tony D.
The town of Centralia, Pennsylvania has been on fire for 55 years. 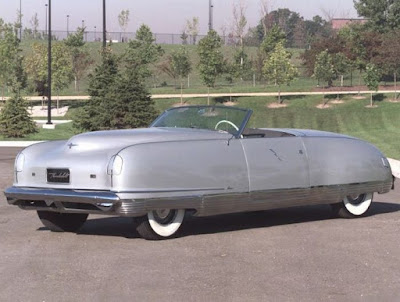 1941 Chrysler Thunderbolt (I never saw one)

Was that the infection that killed him and did you get to see him again after that?

Yes it would be nice to be able to say the truth - but sometimes you are afraid of hurting someone's feelings.

Sweet she went to his church.

A good wife and a good marriage.

Again somehow this man amazes me. And what a devoted wife she was to be a baptist and attend Catholic all those years. Haha.
Im not telling Nick...haha. He goes to a Presbyterian Church while I go to a Baptist. Neither will give. Haha.
Nite
Lisa

What a sweet couple you were blessed to get to know. Very unusual life but filled with love from the sounds of it.

What a handsome couple! Ya, her forthrightness could easily be misunderstood, had y'all not known the sweet lady. One of my FB friends recently posted something I thought was interesting: "55% of the meaning in our words are derived from facial expressions, 38% is in how the words are said, and 7% is in the actual words spoken."

I'm loving that afghan ... suppose Judy made it?

Great friends that know all about baking great pie, a log home, well built with love, church, wonderful way to convey a story. Love your blog, Jack.
Oh, and a 1950's drive-in with more friends all around. Life is/was good.
love n' hugs from our windy, cold north...where the damaging wind blew part of Andy's roofing off today. Another project................for the ins. co.