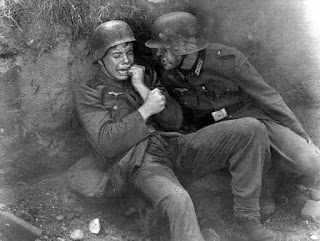 Above is one of the thousands of boys (kids) enlisted in the German army by the Nazi's as cannon fodder. This kid is scared at the sounds of actual battle. He is being berated.

So this is all I have:
I blogged for several years using ‘Windows Live Writer’ software. It was simple to use and you could place your pictures anywhere you liked as you typed.  There were lots of options but it was a great program. I had to open up a membership with one of the photo software groups to use it. I used a lot of pictures, and received a notice from the server than my photo storage was nearing capacity, I should ‘purchase’ more space (So much was free).

A small ‘danger’ caveat stated I could make room for more photos by deleting photos already stored. warning:BUT when you delete in the photo storage you delete the same photos on your computer.

I did not take the warning serious. I deleted hundreds to make room for more. Over time I started noticing in ‘MY PICTURES’ some of my photos were missing. At one point in one block, 6 months of them were gone (still are).

I didn’t worry too much when I read the warning, because ALL my old stuff was backed upon CD. I forgot about many of our travel photos for which I did not create a backup.  So I paid for being ignorant and cheap.  BUT I despise creating more pass words, giving my bank accnt # to deduct $4 a month, etc.

I am fussing I guess, because I do not know another program like Live Writer to create my blogs.  With live writer when ‘inspired I could do up to 8 blog entries ahead and when my head was empty, I could grab one of those ‘super inspired ones,’  and then Evelyn wouldn’t fuss at me for being late. LOL I am flattered when I learn that many folk read the Shipslog  but do not comment.

I tried putting several upcoming blogs on Blogger dashboard, but when uploaded the wrong date was there.


Evelyn is a sweetie who was in Sherry’s class. She, Sherry, and friend JoAnn have been proofing my books and doing a great job of it. BUT let me be late or miss a day and I hear from Evelyn!

BTW do you use any blog programs other than Blogger itself when posting?
Nite Shipslog 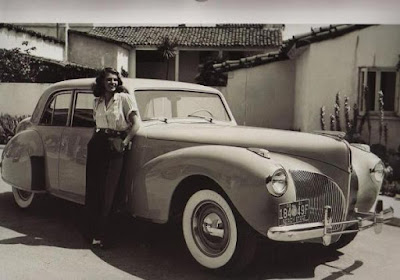 Rita Hayworth with her 1941 Lincoln Continental

That first photo is absolutely heartbreaking.
No, to using programs other than Blogger ... I'm such a technophobe, it's pathetic.
I wonder if "Sean of the South" has a system, or if he really posts every day? BTW, I get a kick out-of reading your comments on his posts.

I used to use Windows Live writer. I Still use blogger and it works on my home computerb But unfortunalty Blogger does not support ipad or iphone so I use an ap called “blog Touch Pro”. Its costed a one time fee of 4.99 and it links to my blogger. So everything I type on there goes to blogger. I have used blog touch pro for a couple years now and love it. Its a lot like the Live Writer.
I think my photos store in Google photos but I also store pictures in Drop box. once I use a photo on my blog, it goes to the google photos though but its unlimited photos unless you use the high quality photo option which I dont.
It seems like as soon as I get used to something it changes.

No, no programs for me. Thank you for the compliment on my memories post.

That all sounds too complicated for me. I don't use any other programs. A lot of my pictures are stored on Google, used to be picasa...and I have had to delete some from storage. But they were ones I didn't care to save anyway. I'm just thankful blogger makes it easier enough for me to use.

I have always used blogger, but I have seen blog press or word press - I don't like commenting on it - hard for me.

That boy being scared is so sad.

You know I have in the past - not recently - but you can write as many as you want and post the date you want or you can post it and save it or you can put it for next year and it won't post till you tell it too.

If this makes sense.

I recommend Google Photo. You can configure it to upload pictures as you take them. If you don’t do the original size, I think it’s unlimited. I use it every day. It has a search function this is smart. You can search for clouds and it will find all your pictures of cloudd.