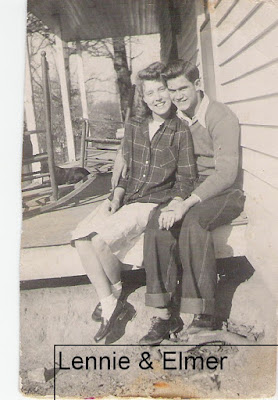 (Sherry's sister Lennie and Elmer courting on the porch! Sherry also courted on that porch! Notice this house has no underpinning!) 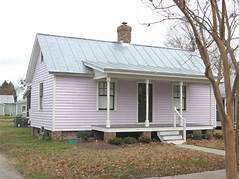 Someone underpinned the above house, originally it was only on pillars. 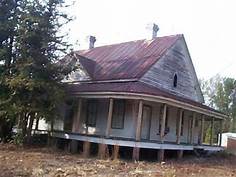 One of the best places to play when I was a child was ‘under the house’. That was before underpinning. I must admit, mama wasn’t that thrilled because all the playing (not praying) was on my knees. My ‘overhauls’ took a beating.

But the dirt was soft, and I could make endless roads and towns for my cars to be driven on.  I
could even dig ditches and put water in them for rivers. We could play under there for hours. You seldom found a girl under the house, it was just a little too dirty for ‘em. 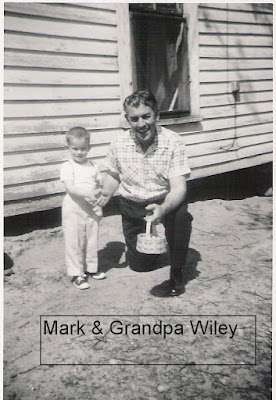 We became engineers when it rained. Shucks, since the houses had no gutters, the rain ran off all the way around the house. We could dig our river beds and have real running water under our bridges. Boys could make lakes and the creeks from the rivers were endless.

What we called underpinning ruined that down south. Of course the closing in made the house easier to heat in the winter. Curtain walls were built with a small access door for maintenance. But that meant it was dark under the house, ruining a great play place. 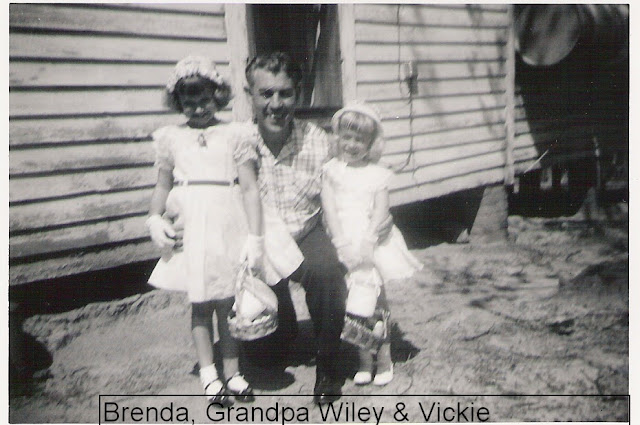 The Nieces, Brenda and Vickie with Grandpa Wiley probably the same Easter!

When I became a builder I learned that a foundation was required as well as the curtain walls. Just for fun I would get into friendly discussions with the inspectors with the structural importance of the foundation and the walls. Up north the curtain walls did serve an important function, heating is much more important due to the lower temps. But for many years I could point out homes still sitting on Rocks, brick/block pillars and not underpinned. They had withstood winds for many years.

Sherry and I drove past my Great Grandpa Hilley’s homeplace a while back. It was never fastened to a foundation, still stands much over a hundred years later.

In the end one inspector said, “You may be right Darnell, but you are still going to bolt that base plate to the foundation. We have saved a lot of 2x8 lumber after the house was blown away!”  Of course we both got a big laugh, we both knew I would follow the required construction standards.

All that aside, I think all laws and rules should pass a logical present day test, simply, does it work? Is it necessary?

PS: Little known facts about the USA
Thanks.. Tony D.
Montana's Glacier National Park has a canine "bark ranger" that helps herd wildlife away from high-traffic areas.
I didn’t know this and we have been there and drove the ‘Highway to The Sun’ in Glacier. 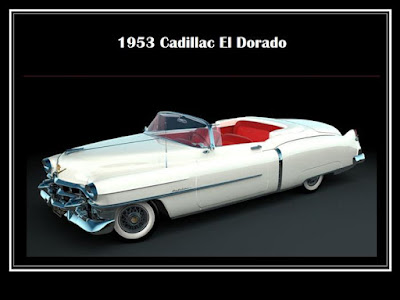 i think if a house is still standing 50 to 100 years later, that is a real testament to time, no regulations needed.

Okay why did they start building houses on piers instead of the ground in the first place - doesn't make sense to me - yet they are still standing. Interesting to learn how the building industry works.

Interesting post....just ran my printer out of ink printing off documents required by City of Okeechobee to replace windows. Finally found some that meet the hurricane velocity codes and impact etc and will nearly fit the "picture" window! In order to get a permit, the purchase/installation instructions and code approvals have to be submitted (some parts in duplicate) this property built in 1930 so it's got lots of room for improvement!

Those are some great pics of old places. I didn't, cause I'm skeered of snakes, but one of my sisters crawled under the house when we couldn't find our dog and brought out a litter of pups! Yep, Mary was dirt from head to toe!!!

Brenda and Vickie remind me of my two girls. I always dressed Lynda and Leah with little hats and white gloves. The old house I grew up in was open like that and it was only a single wall. We only had one heater and no bathroom and didn't know the difference. I've often wondered how we got to an event in the summer without being sweaty as we didn't even have a fan. I don't think we complained much either, we were as happy as if we had good sense.

Things have changed for sure. Sometimes we get lost in all the rules and regulations. You know how to do what is right and that's important !

Loved the Easter pictures with Sherry's daddy. Sweet. As for construction, I asked Bill why houses would be built without a solid foundation...his answer was because you guys never get as cold as we do up north, no frost heave to worry about, so it's why we build basements at least 6 ft. below the frost line and on good foundations. I do remember many a basement with a dirt floor before poured floors were affordable per household. The rules up north are different than down south, we'd also found. lol, I knew you'd follow the rules.
loveyaguys from up north where it's still chillin' outside but the sun shines

Boys and their mud lol...I don't think I've ever seen a house on pillars up here! I guess the houses need the foundation for the weather? Interesting post Jack! And no, you may not have caught me under the house when I was young...but my "girlishness" has eased up somewhat and I'd crawl under there if needed. :)

What a wonderful imagination! In a different time and place, I might have been right there alongside y'all in the dirt. Only my roads and bridges were plastic horses and corrals.

Before looking at these photos, I'd no idea what "underpinning" was. Why, I remember seeing millionaires' homes in California perched precariously on stilts. How's that any different?

We are happy to have used underpinning services provided by Northern Underpinning Adelaide. They have a nice team of qualified and honest professionals. We also got some useful advice while they worked in our house. Thanks a lot for the great help.

Underpinning Adelaide is one of the top underpinning company in south Australia . They give best Structural repairs. I had to call them coz there was cracks in the internal section of my building the team came and fixed it, now there is no crack seen. The team really worked well. Thank you team you guys do amazing work.

We have had some extremely bad cracks around our house and a lot of sticking doors so my wife and I feared that our underpinning might need some work. We tried contacting 4 contractors who never called us back and finally I found an ad for Complete Underpinning they respond back to me quickly. Team came out today and he was extremely knowledgeable, professional Floor-re-leveling services. He did a thorough walk through and went into our crawl space and shared that we really had no issues with our foundation and our troubles were only cosmetic much to our relief. He made a few suggestions of some ways we can help our current issues if we wanted to. If we decide to move forward with any work or have problems in the future we will absolutely hire Complete Underpinning!

Total Underpinning claims to be the best Re-stumping Services provider for Melbourne. I booked the services over phone and the team come to my place at a priority. They are engaged in Steel, concrete and timber stump replacement. they fixed my welding requirement within a few seconds. Thank you Total Underpinning for your timely services. I am quite satisfied with your work. I would like to recommend you to everyone.

I have a broken roof of my godown through which all rain water came into the godown and damage mt things. I hire Underpinning Melbourne Group to repair my roof and they did the job in very less time and repair my roof and also fill the cracks in the walls. Thankyou so much UMG to resolve my problem.

I recently used underpinning solutions by Master Underpinning for my home. My family was reluctant to this service but these people handled the opposition very well. The team that approached my home was courteous enough to explain how their underpinning procedure works and also answered all our questions. Once I gave them the job they worked in a very professional manner and ensured that we got an excellent result. They even cared to clean up all the mess. Would definitely call them again whenever needed.

Thank you for a wonderful and peaceful underpinning service. A few cracks were beginning to appear in our floors and walls and we could not find the reason. When we contacted My Home Underpinning, they sent a consultant at our home on a single call and offered underpinning solution. The process was mess free for us and we didn’t spend a fortune on it. Thanks again.

I got a chance to use Deep Underpinning last week. In spite of the good service and Cracked Walls, we were delighted to have your team at our home. Your technicians were not just quick but also patient enough to answer my 6 year old’s questions related to underpinning. In this process, even we got a chance to understand all about underpinning. Amazing experience.

We are happy to share our experience with Underpinning Melbourne Group. We used their experienced underpinning services last week to get our Deck Construction Services. They were punctual, reached on time, highly experienced, and performed a smooth service. We didn’t have to move an inch and the outcome is splendid. Thanks for a wonderful experience.

Thank you Five Star Restumping for a wonderful underpinning service at my home. The cost was affordable and the service was commendable. I have recommended Restumping Solutions to as well.