Harry and Glenda (and the rest) products of WWII 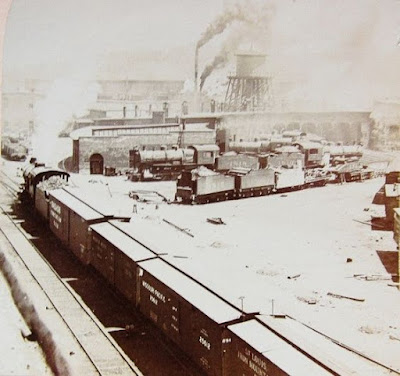 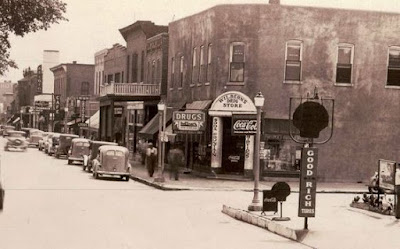 Personal history living in  Missouri.
Being the son of a preacher, my life was church. The denomination, Church of God. I strayed for many years. I realized I loved to entertain and teach kids. I met some wonderful Christian folks while in the USAF and decided I would study, and if I could qualify, become a minister. When we arrived in Missouri, I was studying for the ministry.
We met Kenneth and Eileen Conrad.  He soon became my hero. They were country folk. 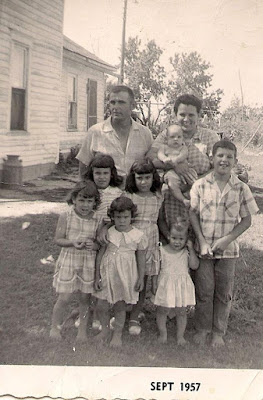 (This was two years before we met. I stole it off Glenda's  FB, I have lost so many pictures because of ignorance. Photobucket  deletes the photos on my system when I delete on Photo bucket.) Photo missing Robert, David Luke and Vickie.

Kenneth returned from serving in WWII. He was in Florida finishing his tour when he met the beautiful Eileen, a dark skinned beauty with family history in the Caribbean Islands. They married and he took Eileen from the comforts of modern ‘plumbing’ to the country of Missouri where she soon remembered what an outhouse was.

Their enduring love produced 10 children. All beautiful and to the last, good people. There was: Harry, Glenda, Juanelle, Robert, Irma, Kenny, Lill, Mary, Vickie and David Luke (not in order I am sure).  Harry was the oldest boy (a hero of mine in VietNam.) Glenda the oldest girl holds a special place in our lives.

I had to be away (to Kansas City) for discharge, and Sherry asked Glenda to spend the week with her. I remember we sang “Ahab the Arab” all the way home.  I left them all in Kirksville, Sherry, Jack Jr, Baby Mark, and visitor Glenda. I headed for KC for discharge.


That week turned out to not be a vacation for Glenda. Sherry became very sick and Glenda at 12 yrs old took care of the boys and assisted in feeding them all.  We have never forgotten that.

Glenda comments here on the Blog. She became a Super-duper in investing and finance.  She was a troubleshooter with a large international company and traveled the world. She is now retired in Florida. Not long ago she drove over a hundred miles to bring Sherry her favorite flower as a mature plant, the gardenia.

She also brought a beautiful arrangement for Sherry. A little while before that. 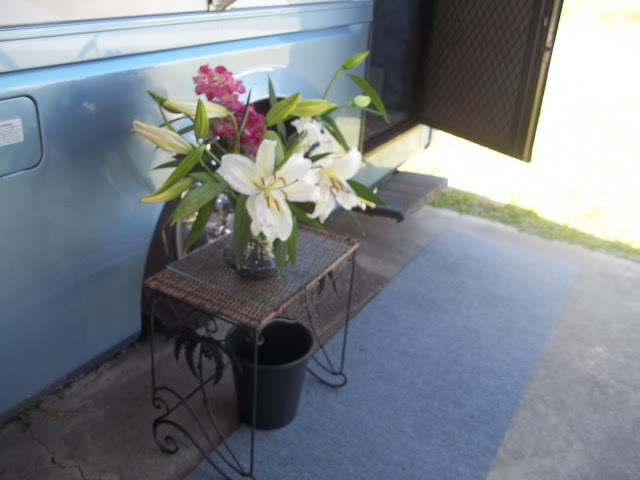 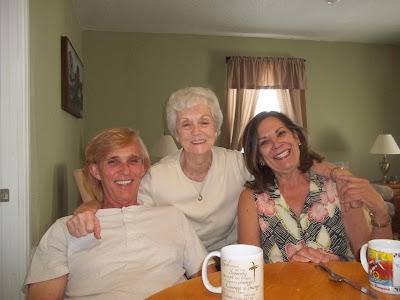 (Two visitors, Jack Jr. down from NC and Glenda came up to bring Sherry her flower.)  Hard to believe she used to baby sit Jack  now she is approaching SS time and he isn't far behind! WOW.

As I said, that entire family is special. Eileen had a voice that qualified for Carnegie Hall .Every child in that family has been successful. They are all wonderful.  Kenneth was a lucky soldier to find Eileen Pinder.  We were fortunate to know the entire clan. We were actually their pastors for a few months.
I think everyone in this family can sing. Glenda cannot praise Vickie enough, saying she has even more power and range than mama’.
More tomorrow, sorry to be so long, but this family IS Missouri to me.


  Warsaw,MO holds the state record for the low temperature of -40 degrees on February 13, 1905.  And also the high temperature recorded, 118 degrees on July 14, 1954.
  The "Missouri Waltz" became the state song under an act adopted by the General Assembly on June 30, 1949
  During a nationwide competition in 1947-48, architect Eero Saarinen's inspired design for a 630-foot stainless steel arch was chosen as a perfect monument to the spirit of the western pioneers. The Arch has foundations sunken 60 feet into the ground, and is built to withstand earthquakes and high winds. It sways up to one inch in a 20 mph wind, and is built to sway up to 18 inches.
  In 1889, Aunt Jemima pancake flour, invented at St. Joseph, Missouri, was the first self-rising flour for pancakes and the first ready-mix food ever to be introduced commercially. (My favorite PANCAKE MIX AS A CHILD)
  The most powerful earthquake to strike the United States occurred in 1811, centered in New Madrid, Missouri. The quake shook more than one million square miles, and was felt as far as 1,000 miles away.
  During Abraham Lincoln's campaign for the presidency, a dyed-in-the-wool Democrat named Valentine Tapley from Pike County, Missouri, swore that he would never shave again if Abe were elected. Tapley kept his word and his chin whiskers went unshorn from November 1860 until he died in 1910, attaining a length of twelve feet six inches. 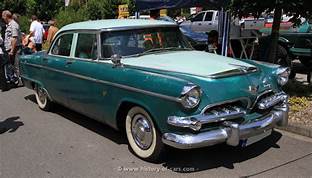 This is a 1955 Dodge, I know Kenneth  transported the entire clan in one something like this. (maybe one of the kids will remember the year!)

118 degrees is toasty. I learned a LOT about Missouri tonight.

I just commented and It’s not showing up:(
I said, I learned a lot about Missouri tonight.

what dear friends you made to last a lifetime. more than worthy of a missouri entry.

What a wonderful family and I'm glad to hear of the visit. Keeping in touch after so many years is a blessing. I would say you will always remember your time in Missouri with them, who could forget such wonderful people. Hope you all are having good weather there. Still very cold here today, but next week they say we'll warm up a bit.

I don't remember what year our Dodge was ~ DO remember our pastor Jack Darnell braving an incoming ice/snow storm to bring Mom to their parsonage as she was due any moment to give birth to her tenth child. Our farm was quite aways way from the hospital on not such a good road. Sherry set up the guestroom and they cared for Mom until time for delivery. These two epitomize caring, sharing and loving others just as Jesus taught us to "love one another".

Well, I just think its cool that you used to be a pastor. Following you daddys foot steps.
Great family friends you have! Love the flowers.
Speaking of babysitting, I used to baby sit a boy that is now a country singer. It makes me feel really old. Hes not at the top of the charts yet but hes good. We talk on Twitter but that all I hear from him now. His mom and dad are still close friends to my parents. I plan to blog that story one day.

NOW the puzzle pieces are starting to come together in my mind! I recall hearing you speak fondly of Eileen and Juanelle but didn't realize your roots grew so deep, so long. Family's sure not defined by blood, is it? Thanks for sharing the Conrads today!

You have sure had a wonderful life with so many thoughtful and caring people. I'm not surprised at all that you chose to explore the footsteps of your father. Glenda and her sisters all look alike, Beautiful as their mama, a beautiful family.
MO has had some pretty intense weather. The earthquake is scary. Love the ol' Dodge. Now days families the size of Ken and Eileen and my folks, any family with so many kids, would never be able to ride together in the Dodge.
They'd need a bus with todays rules. As a kid, we all climbed in the back of a Chevy Suburban, not one seat belt, baby seat or youth chair. Things sure have changed. We survived.
love n' hugs from our cold north where we've been having the coldest weather since 1972..........minus -10 this Apr.morning.