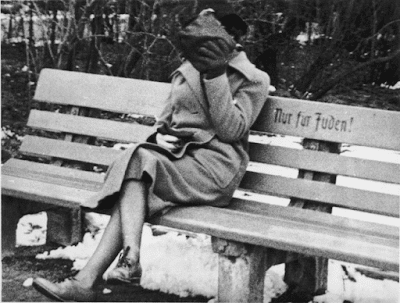 A Jewish woman in Austria in 1938 sitting at a bench labeled only for Jews.  (Sitting somewhere else would have sent her to jail and worse)
(For those who think the USA is oppressive, I invite you to think about that.)

today...
I didn’t want to leave a really bad impression of Key West. I do think if you travel and like salt water, you should make the 156 mile drive from Miami to mile marker one of US 1.
You will drive a chain of keys over 42 bridges between the many keys. The longest bridge is the 7 mile bridge connecting Marathon Key and Little Duck Key. When we first went down it was all two lane road.  It has since been modernized (some).
The drive is gorgeous and to most it is not a ‘white knuckle’ drive. I am not sure now, but at one time there were many hitchhikers (I called them hippies, not sure what they are called now) headed for the end, Key West, Margaretaville. 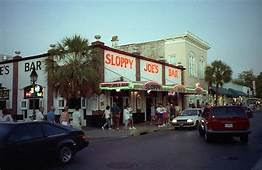 Key West does not have good beaches. More shells than sand. But Key West is NOT beaches. KW is Hemmingway, history, Jimmy Buffet and drugs. Once while I was there the entire city fathers were locked up on an SBI drug sting. The Fire Chief was convicted of selling drugs out of the trunk of his ‘lime green’ chief’s car, photographs etc. He was convicted and released on pre-sentence bond. He disappeared. Has never been seen since. His name, “Bum Farto”, look it up.
Then the prime witness against the mayor, et.al. Died of intravenous injected battery acid. Miraculously all witnesses decided they might have been mistaken, etc. It was wild. Eventually all the city fathers, except fire chief, Bum, were reinstated with back pay.
Most folk want to be photographed at US1 mile marker ‘0’. For years that bumper sticker was on all of Mark’s cars I think.
President Truman loved the Key West area, when I was there the USN had a Truman Annex.
I did enjoy most of my tour there. The worst thing that happened is my boys were introduced to drugs, that demanded most of Sherry & my time on our daily walks.
Later one of my boys told me they did drugs with some of the local police. I guess that statement alone sorta dropped KW from one of my favorite places.
Anyway, what I said it is not one of my favorite places, although it is beautiful. 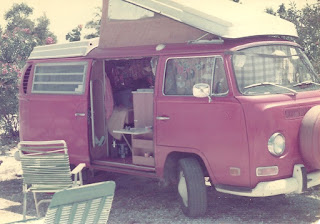 One of our KW vehicles good on flat land, not so much in the mountains.

Wow with all the bridges connecting things. Not sure I could handle that even if it wasn't white knuckled driving. Sad that so many people in authority were into drugs and it spilled into them doing drugs with others in the area. One hopes their children won't get involved with it, but sadly is often the case that doesn't happen and we just have to hope they eventually come to their senses and stop pursuing that type of lifestyle.

Well, what you said about KW does put a sour taste in my mouth. But its all the bridges that will stop me from ever going there. Eeesh! I thinkk there are a lot better beaches to visit. If KW was that drug infested then, imagine it now. Ill pass. I live around enough of it here in the grassy lands.

My oldest son always wanted to visit Sloppy Joes. There was a song called Sloppy Joes, that he used to entertain us with. I have been to the Palm beach area and Orlando but never to Key West. Drugs are bad here too and sad to see them taking over where our youth are concerned. Thankfully, my family has not had to deal with that problem, but so many have and it doesn't seem to matter where you live these days. Having tons of grandchildren that is something I'm concerned about. On the bright side it's going to be a beautiful day in Ohio and I've got a family gathering to go to.

I hadn't known about drugs being an issue 'back then.' Plus, I'd forgotten about the lack of sandy beaches.

I think KW citizens' island-like attitudes (don't worry mon ... be happy) are somewhat admirable, but sure chafes at my own more structured (polite word) personality.

We went to Key West, Walked Duval Street from one end to the other ! Had our picture taken at MM # 0 and 90 Miles to Cuba !!!! Cost a lot to stay there !!!! Finally cooled down up here down to the high 70's which is more near normal ! Gardens doing great, SWEET CORN is now available and BIG beefsteak Tomatoes. You 2 behave yourselves !!!!!! Take Care GARY

We’v Never been to Key West. We drove about 50 miles south of Miami but ran out of time.
It’s a beautiful drive.
I’m not sure why your blog doesn’t send me notices when you do a post. I don’t think your rss feeder like me :)

I think I will skip Key West. Didn't Tom Cruise make a movie about it - drugs - killings and all?

I've been to Orlando but never the Keys. I think I'd pass today. I also understand why it's not your ' favorite place.' We spent the day at the campground and lake with Andy's and daughter Darcie's families.......now that's a cool way to spend time with the grandloves. The water felt so great.
loven'hugs from up north where evenings are dipping into the 50's with 70ish days. Life is wonderful!