Shirley outside the Belmont Historical House where she volunteered. 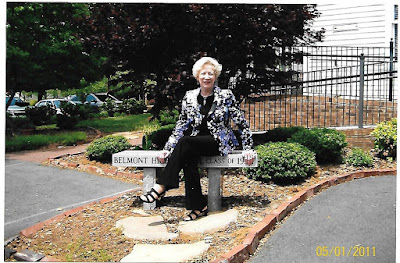 “One never knows, does one?” That is a quote used often by my oldest brother. Shirley and I would repeat it often......  Since her passing I am learning more and more how true that statement is. 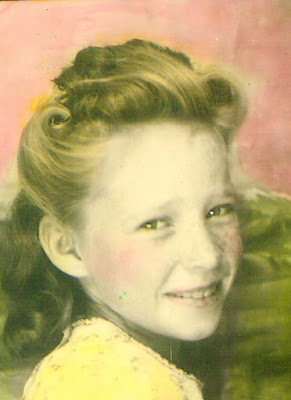 (She would always laugh at this picture, sister Kat had fixed her hair like a grown up, BTW like Sean of the South, she was originally a redhead)
I talked to a man a couple days ago who said, “Jack I did not know the ‘Songbird’ was your sister. She could stir me with that voice!"

Again, I may be repeating, but the ass’t manager of Roses told me she often paid customers’ bills when it was obvious they needed the help.

I am hearing many stories I did not know. First of all let me explain, Shirl did have some savings from the sale of her home  11 years ago.  She leased from us at a deep discount. BUT her total income was about $1400 a month and she went into her savings  $500+ a month.  That said, I just received this e-mail from Grandson Josh. I did not know this story:
e-mail from Josh.
Subject: About Aunt Shirley
I was reading today's blog post with stories about Aunt Shirley's life.  It reminded me of one.  You probably know this already, but thought I'd share in case you didn't.

When I was in college, Shirley called me one day and said, "Could you meet me down at the bank?" I really wasn't sure what it was all about, but I met her at the Wachovia (now Wells Fargo) in downtown Belmont.  She knew everyone in there, knew the bankers and tellers by name.  I felt like I was walking in with a celebrity, the way she smiled and shook people's hands and asked about them and their families.

We walked up to the counter, and she asked the woman working there to transfer $2,000 to my account!

This was a phenomenal amount of money to me, as a college student who only had a part time job.  Heck, it's still a big chunk of change!

The reason for the gift still makes me laugh.

You and Grandma had bought Steve a computer for college.  I had a received extra financial aid beyond the cost of tuition and fees, and used that to buy a computer, so I didn't need one.  For whatever reason, Aunt Shirley wanted to "balance the scales" among the twins anyway ☺

As it turned out, I was able to use that money to help with other expenses - textbooks, parking passes, etc.  So it really was a great help.

Anyway.  I just thought I'd share an example, one of many I'm sure, of Shirley's love and (sometimes eccentric 😜) generosity.

Love you both, Josh

No Josh, we did not know this one either. Thanks!
Of course Sherry and I again knew more tears.
Nite Shipslog 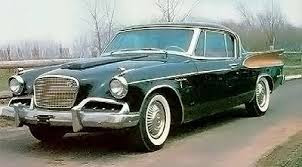 Jim & Shirley were Studebaker fans. Shirley drove one like this to work for years.
Posted by jack69 at 11:54 PM

Like I said yesterday, she was one of a kind and what a great legacy she left behind. And humble in her generosity. I bet you continue to hear stories like this over time as others share their memories of Shirl.

You just never know -- truer words were never said. Your wonderful memories of your sister are great but when you hear others tell of her with their great memories too...it is an awesome thing. She certainly led a fulfilling life and I don't think had any regrets either. Thanks for sharing !

Jack, Your sister Shirl reminds me sooo much of our Daddy. There were 9 of us to support and he never failed to see to our happiness and needs. He, like Josh's Aunt Shirley, had a most generous heart. We all knew he was loved by many but we were astounded the numbers...at their 50th we extended an open invitation and hundreds arrived. When he passed, it took 4 hours for loving attendees to extend their love. Your sister was also one with so much love and always smiles to give. You were so blessed. My hugs to you as your hearts heal of her physical loss.
from up north, know you are in our thoughts and prayers. Time heals as one more star shines bright above.

Jack her death is giving you so many gifts. Your sister was an angel. An angel unaware. Yet you knew. She always has sounded wonderful - but wow - she was awesome! You take after her.
sandie

You just never know! Isn't it neat how family-isms are passed on? My son and I are fond of repeating one of my father's sayings: "I could go for _______,"

Shirl's generous gift to Josh sounds like something my mom would do! She was always careful not to show a whit of favoritism between her granddaughters. Heaven is certainly the richer for those ladies!

What a gift to this world, she was!
Thank you for sharing these compassionate and loving stories of how she positively impacted life for those around her.
Gentle hugs to you....
Love,
Jackie

Sounds like your sis was an angel long before she got her wings.

Shirl was a special woman indeed.