Martin the Lutheran, James the Luthier. 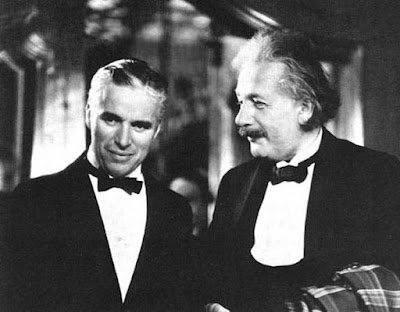 Charlie Chaplin and Albert Einstein.
My cousin Ken Herron and an online friend Rick Watson have newspaper columns, which is something I would like to try. However, just trying to express myself in books brought me in contact with proofers (!OUCH!). Reality set in. I came to the conclusion that being a columnist is NOT going to happen. My command of the language is VERY limited. Nothing would expose my nakedness like putting the unabridged me out for thousands to see.
A little back ground here. I knew a boy from the Mountains whose dad made him a banjo. It actually sounded good, but was nothing of beauty to see. Maybe like me growing up you made a guitar out of a cigar box, a stick and some fishing line. FUN, but definitely not a thing of beauty.
Lately I have had a chance to see real beauty in hand crafted guitars, pistols, rifles and violins. I love wood and admire craftsmen. For some reason I could not conceive ANYONE ‘building’ a REAL guitar or violin. They look so fragile.
I met Jim and Dean thru Sherry. She and Dean were schoolmates. She plays a bass fiddle. Jim is a writer, singer and guitarist. They invited us over to see some of Dean’s son’s crafts after his untimely death. That is where I saw Jim’s handy work, two of his beautiful hand-built guitars. 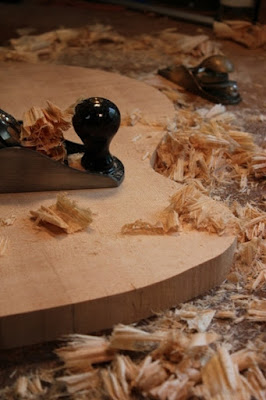 (Picture taken from 'So you want my job ' on the net.)

We saw long guns, swords, violins and handguns Dean’s son James had crafted.
Now the reason for this post. James, like my sister, wanted NO OBITUARY. Awhile after James died Dean worded a tribute for the paper to her son. Most folk, like me, never knew James nor his OUTSTANDING abilities with his hands. His day-job was in a department store, his talents were ‘hidden’ from the world.
Now the glitch, in her written tribute delivered to the newspaper, she mentioned James was a talented blacksmith and ‘luthier’.
When it hit print it read: James was a talented blacksmith and ‘Lutheran’. Someone did not take the time to look up the word and evidently though the meaning was Lutheran.
The following is the line from the reprint after Dean pointed it out:
James went to Belmont Schools he was an avid reader and was a blacksmith who built long rifles, swords, knives and more. He was also a luthier who built violins, all hand-crafted and beautifully carved.
I can attest to the skill, I saw and held some of his work. I will also be the first to say I had no idea what a luthier was.
The point, I can tell a story to an audience and if I flub, I can try to cover it up. But placing my ‘writing’ in a column (If I was allowed to) would be dangerous. 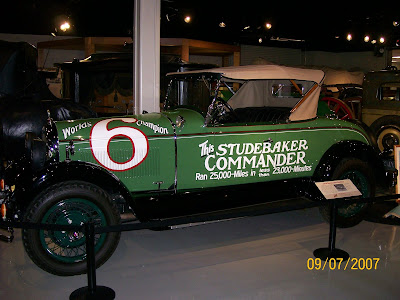 Taken in the Studebaker Museum South Bend In.

Well I think English majors and specialist like newspaper writers - better be pretty sharp - they have to be held accountable. I didn't know what one of those things were either!

i had a column in the local paper as a feature writer years ago. i think you would do a good job as one too.

I couldn't even find that word in my pocket dictionary...I've always written personal journals of raising kids and a hobby farm.......small livestock. but I'd be hard pressed for proper language...like Dad used to say, say it like it is. He built many instruments, banjo, a couple dulcimers, wooden flutes out of what he called whistle wood. He built canoes and river boats...and launched them successfully. All in a days work and play. And by the way, YOU are a great writer. Don't sell yourself short.
loven'hugs from up north where the south side of the cabin gets it's facelift today. Have a beauty of a week.

Oh wow, not a Lutheran but a luthier. That slip in words certainly makes a world of difference. Being a columnist is one of those jobs that could make or break you. One would certainly want to be sure of the words they were sharing with others. I would think you would do a good job of it. I've read Rick's columns and could compare them to the posts you've made here on blogger at one time or another. He writes about places and people and rarely uses any fancy worlds to do it. Sorry to hear of yet another loss though not of family but of friends.

Makes you think Auto Correct didn't know what luthier was and changed it to Lutheran. I think that's what happens these days, people aren't proofing things like they use to, machines are doing it and no one is going back to double check if it is correct. Lovely tribute you did for your friend's son. I know they wish he was still here, but he left a great legacy in his work and skills he possessed.

Talk about an attention-getting blog title! At least I learned a new word today! :)

Please don't go selling yourself short. I suspect the world of journalism is full of smarty-pants who can parse a sentence … but haven't a clue about weaving a story as you do!

BTW, I loved visualizing you the other day in your basement giving Shirl heck!

Oh no Jack. You cant let it go that easily. You would make a great columnist. You can get a proof reader. I say give it shot sometime.
I never knew what a Luthier was either. Your post just taught me something. As I read this, I thought it was going to end with the paper calling him lucifer. I guess I had my mind in the wrong place. haha.

From over here at work
Lisa