Johnny DID NOT arrive in this, but If I have a last ride and not buried at sea, I wouldn't mind this being my RIDE!

After a lot of stress and work, it all culminated into a good service. Sherry & Brenda did good.  We did not expect a big crowd. It was cool and windy and many of the family were sick or ‘concerned’ about spreading not just the Covid, but colds. 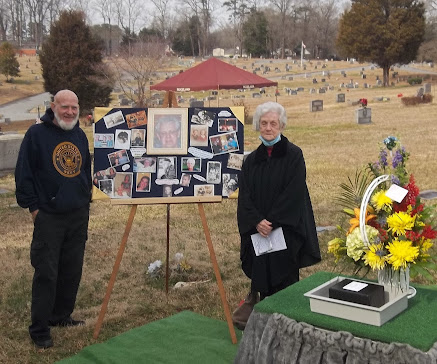 It is such a shock to the mind to look at that little black box and realize that was a 5'9" man weighing in at about 300 lbs. In that box are ashes that represent 80 years of living. 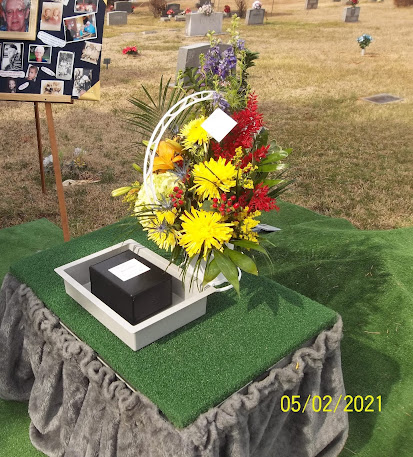 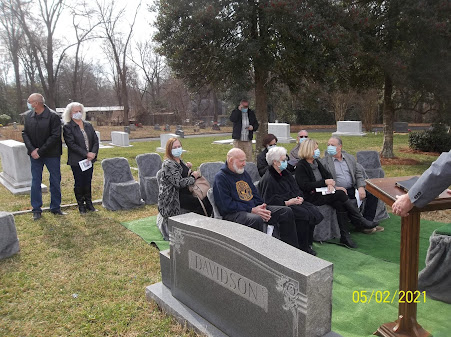 Sherry had not asked for chairs, but we were glad the director brought them out. There were a few more standing to the left of the shot. 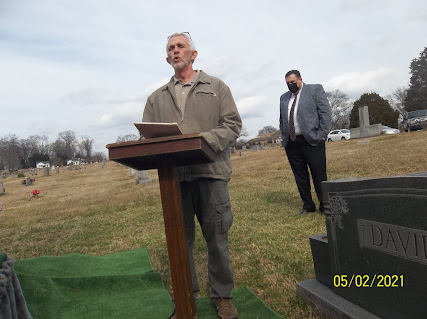 Son, Jack Jr. singing 'Will the Circle Be Unbroken?'  Of course  he did a great job. 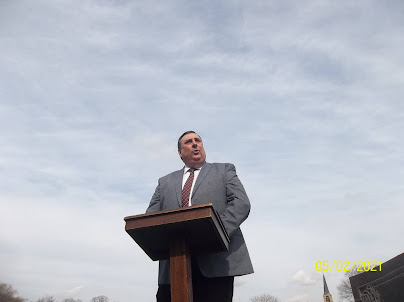 Pastor Peterson did a good job also,  His timing was also good. 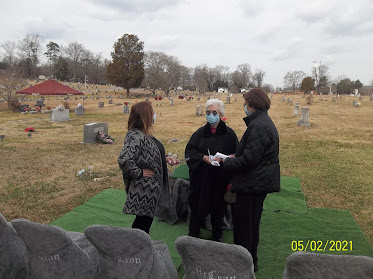 Above, after the service, My Sweethearts Corinne and Sherry talking with Brenda. I am sure both felt a load was gone off them, and no problems.

For you folk in the cold country this would have been balmy, but for us southerners, 10 mph wind and 40-50 degrees is COOL, at least not comfortable.

For you that did not read about the hospital incident between Pastor Peterson and my sister Shirl, I will give the reader's digest version to give you a smile.

Shirl was rushed to the hospital, She gave me strict orders NOT to inform the pastor. She was at the time easing into some dementia. Of course I told the pastor. When he knocked and walked into her room she looked up front her bed and said, "Oh Shit!"

He handled it great.  That  has brought a lot of smiles. Shirley would enjoy the story being told (after the fact).

Sherry and I both are the last of our families now.

Thanks so much for sharing Jack. Yes its so surreal seeing that little black box... I dont doubt he was with you all today. I strongly felt his presence yesterday, words cannot describe. Beautiful service & flowers, he is content. Wish I could have heard the pastors words & your sons hymn. So sorry for all that Sherry & Brenda have been thru. I wish them peace & comfort in Scriptures promises 🙏 Stay warm & meditate, you will feel Johnnys love & appreciative presence... Thanks also for the story of your sister, humanity at its best! Love you all! P.S. It was 4 below zero here today

From what you've shared, methinks Johnny would have given this intimate service 2 thumbs up. When my mother passed I remember (briefly) thinking, "Well, I'm next in line." Truth is, we never know. A meme I recently shared on FB closed with, "No-one ever knows how young or old they are."

Your PS made me giggle!

The service looks to be just the right one to honor Sherry's brother. Yes, your 50 degrees would be balmy here. When it's this cold out the ground is frozen and hard to bury people . Glad you all laid this fine man to rest is the best way possible. The good Lord have mercy on his soul.

Johnny's earth days are past and now he shares the heavens with the loved ones that had passed before him. I always feel relief, knowing God takes care of us all, now and then. He's resting in peace. Sherry, her niece, all of you have memories that no one can ever take from you. It's called love. The Shirl story signified the human in us. Her story brought us back to life on this earth, as real as it gets.
loven'hugs from up north where our wind chill factor is well below minus -30 today..........brrrrrgrrrr.

I'm sorry for your loss and I'm sure he was smiling down and would certainly approve of all the work Sherry did to make it a final farewell to a beloved brother. It's heading into the bitter cold time here. I always say that February is short but has the worst weather of Winter. You take care and I know that I would jump for joy if the temps were in the 50's instead of the teens! That's winter in Ohio!

Prayers for Everyone ! Having done Funeral Services it is hard to put a persons life into a 15 minute presentation before we close out their Physical Life and lay them "Under the Sod" ! It is not easy to look at a small container and realize that this was once a Person ! Sitting here can right now hardly see across the street due to Blowing, Drifting Snow, we now have a fresh new 1 foot of snow ! Sending our Condolences and Love from the Snowy North, Gary an Anna Mae

Looks like a sweet little service for Johnny. Im sure he was smiling.
That Shirley must of been a hoot. Nick has an uncle Jim with the same personality. Haha.

I think they did a wonderful job on the service. Perfect.